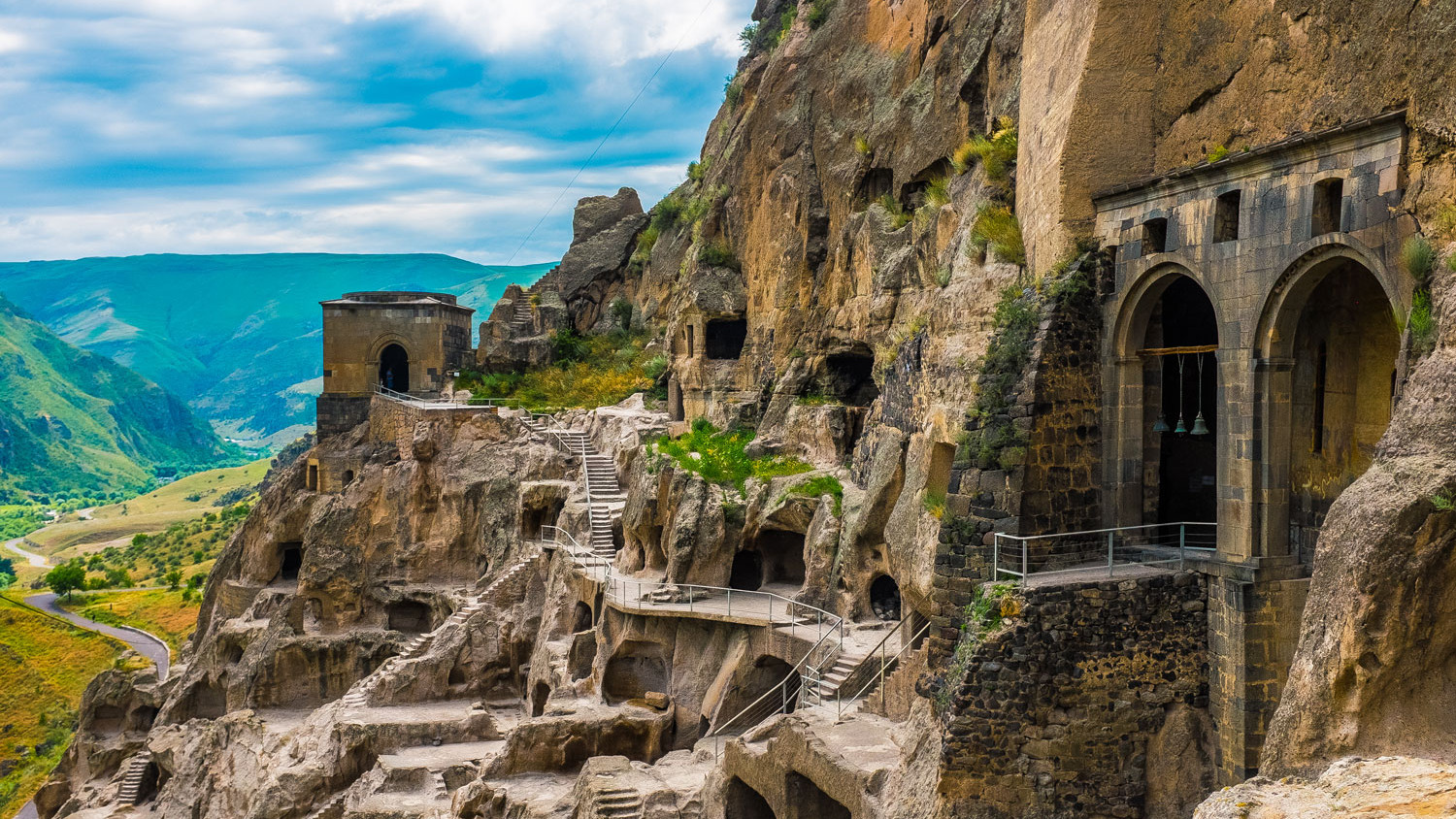 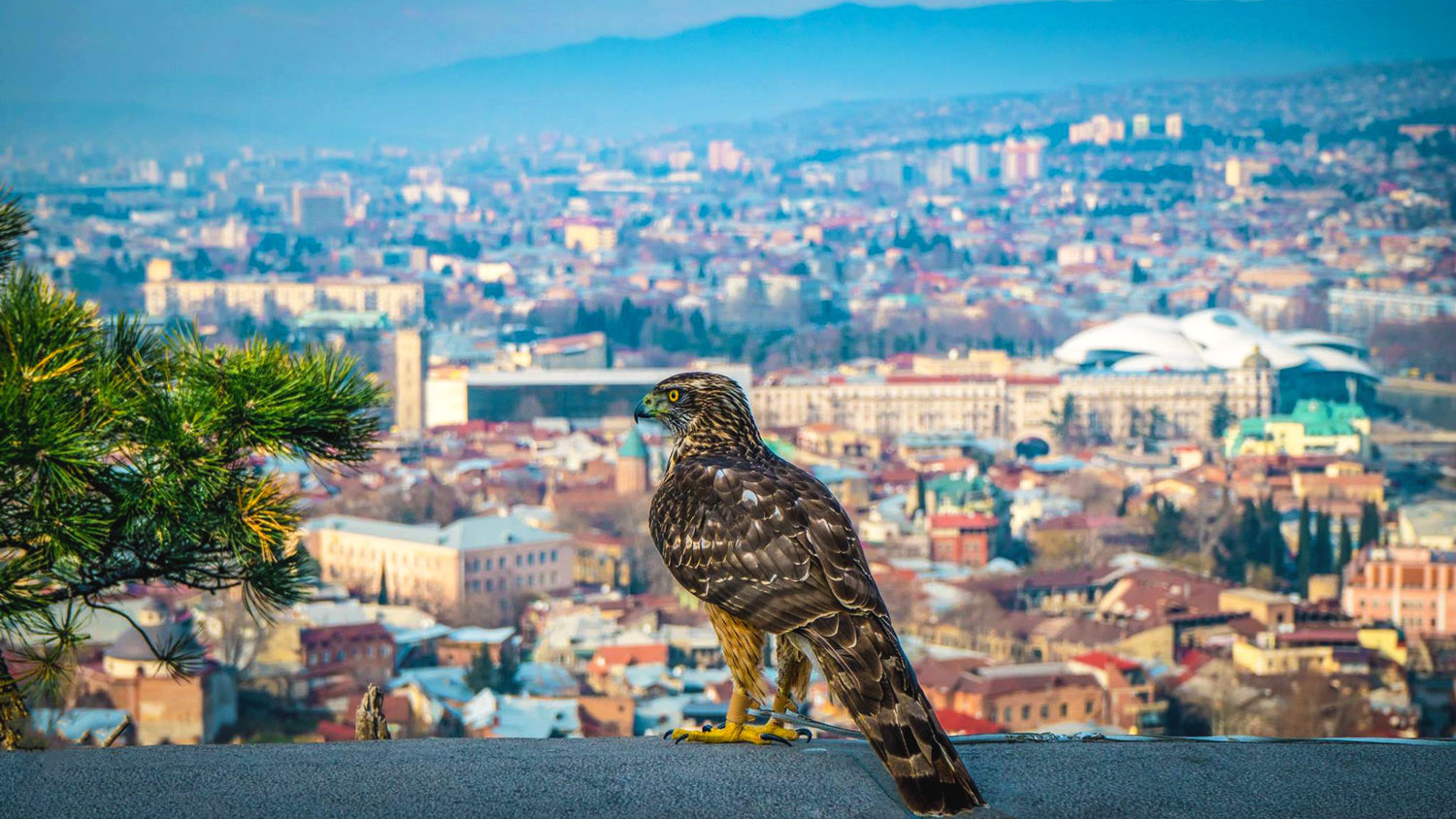 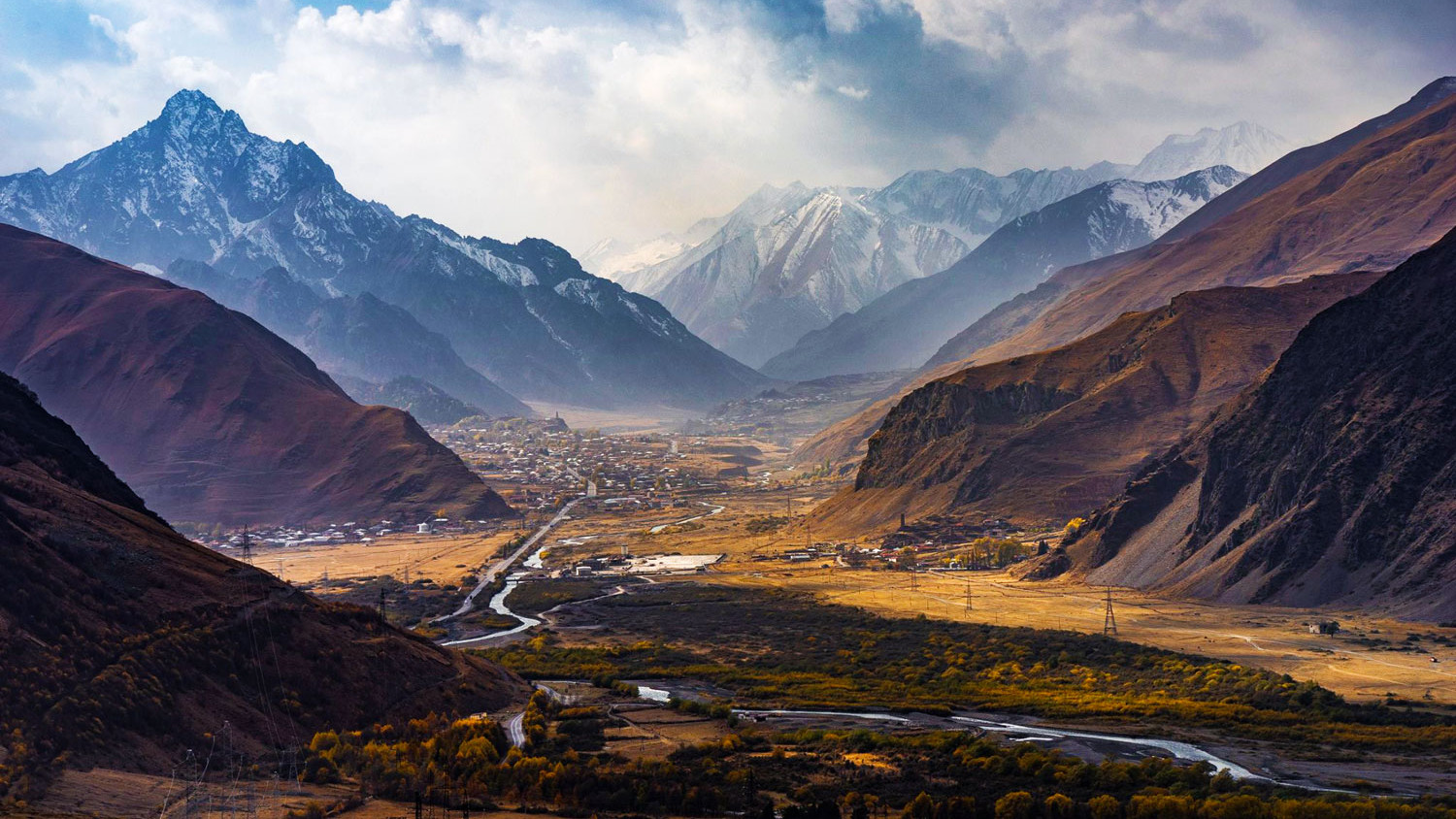 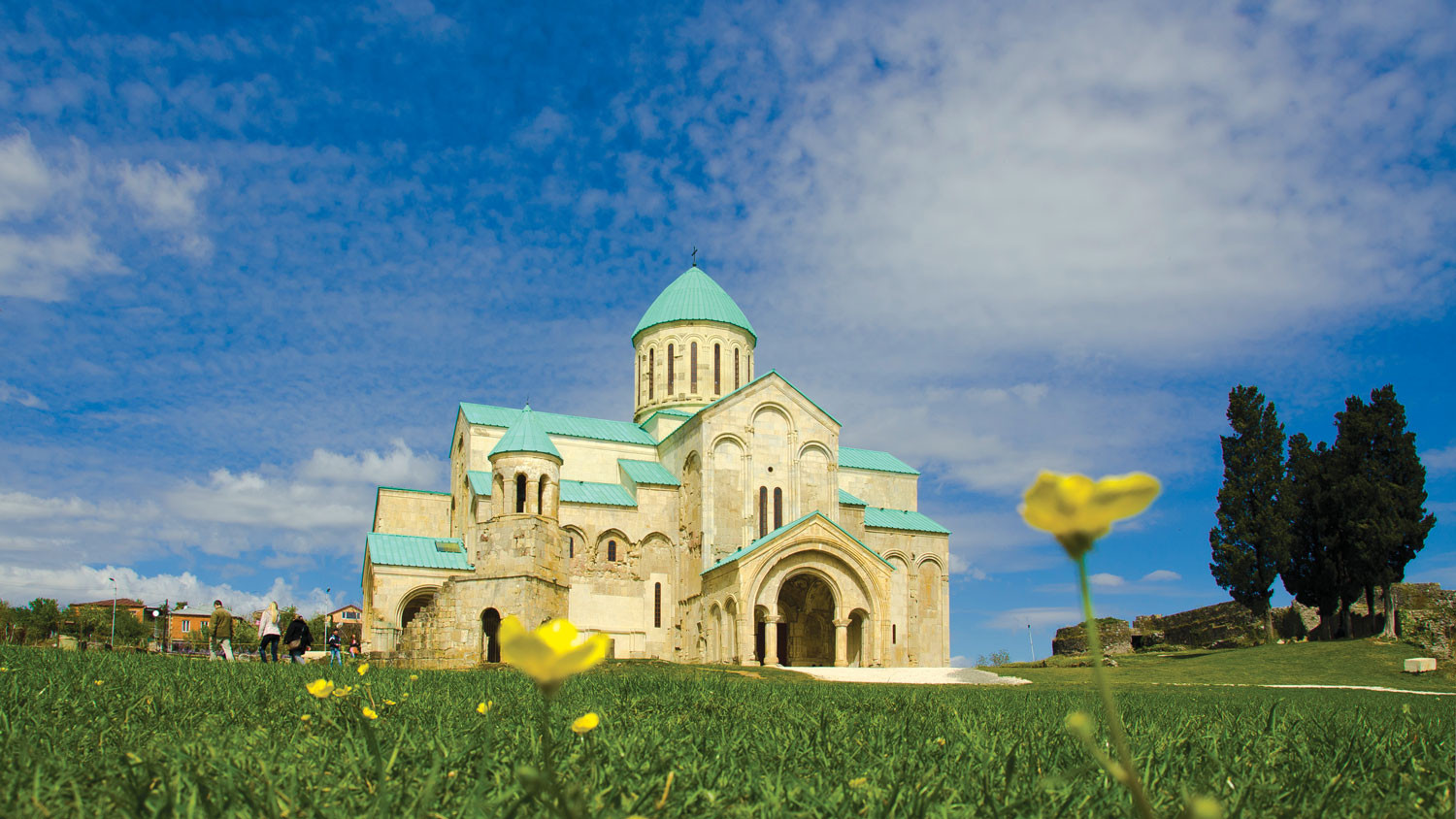 A private package is well-suited for travelers arriving at Kutaisi International Airport. On this tour you will be able to explore both western and eastern parts of the country.

In 8-day period travelers will visit ancient fortresses and cave complexes, major cities and towns of the country, alpine valleys and lakes, nature reserves, and various monuments of Georgian church architecture from medieval times that are recognized as the part of the world heritage of special historico-cultural significance.

Arrival in Kutaisi Airport. Transfer to the hotel.

After breakfast at the hotel, we drive to Borjomi spa-town. Borjomi is famous for its mineral waters. We take a walk in the Borjomi-Kharagauli National park and taste mineral waters coming right from the springs.

Afterward, we continue the trip to Akhaltsikhe, a small town in Samtskhe-Javakheti province. Here, we are going to visit Rabat fortress. Samtskhe-Javakheti History Museum is located inside the fortress and has over 25000 artifacts preserved. The collection includes manuscripts, archaeological, numismatic and ethnographic artifacts, etc.

After breakfast at the hotel, we continue exploration of Samtskhe-Javakheti. We follow the road along the river Mtkvari and stop by the Khertvisi fortress. Khertvisi is one of the ancient fortresses in Georgia that served as an important fortification protecting the south border throughout the feudal times.

From Khertvisi we continue to Vardzia – cave monastery complex established in the 12th century, during the reign of Queen Tamar of Georgia. The frescoes from that time are still preserved in the caves. One of them depicts Tamar herself.

After excursion in Vardzia, we drive back to Tbilisi. On our way, we pass through the Javakheti Plateau and stop by the alpine lakes of Paravani and Sagamo, and Tsalka reservoir.

On day 4 after breakfast at the hotel, we start driving towards the Greater Caucasus mountain range to the north.

On the way, we stop at Mtskheta town and visit its two famous monuments – Jvari Monastery, built in the 6th century, and Svetitskhoveli Cathedral from the 11th century. Both of these churches are recognized by UNESCO as World Heritage Sites.

We continue our trip to the north and make another stop at the Zhinvali reservoir, to pay a visit to the Ananuri Architectural Complex. The complex once served as the seat of the local feudals – Aragvi Eristavi (Dukes of Aragvi) and is comprised of churches, fortifications, and residential buildings.

From Ananuri we continue our way to the north and arrive in Gudauri ski resort, located at an altitude of 2196 meters.

After breakfast at the hotel, we continue driving towards the mountainous Khevi, and get to Kazbegi town, the administrative center of the province. Along the way, we are going to make a few stops at the Cross Pass (2395 m) to taste mineral waters and observe waterfalls and snowy peaks of the Caucasus mountains.

From Kazbegi town we walk up to Mount Gergeti to visit the Holy Trinity Church of Gergeti that is situated on top of the mountain. Built-in the 14th century, the church stands at an elevation of 2120 meters above the sea level, at the same time located under the Kazbegi glacier (5047 m) and overlooking Kazbegi town.

After excursion in Gergeti, we continue our trip to Dariali gorge, the gorge of river Terek. In Dariali we can make a stop and take a look at Gveleti waterfalls.

After the Khevi sightseeing tour we drive back to Gudauri.

After breakfast at the hotel, we drive back to Tbilisi. After our arrival, we start the Tbilisi City Tour and visit all the major attractions of the city.

City tour starts from the Holy Trinity Cathedral (“Sameba”) – the main and the tallest Christian Orthodox churches in Georgia. From Sameba we continue to Metekhi Church built in the 13th c., located on the elevated cliff at the bank of the river Mtkvari in the old district.

From the Rike park, old Tbilisi, we take an aerial cable car and drive up to the Narikala Fortress. Narikala fortress dates back to the 4th century AD. It is situated on a hill, overlooking Tbilisi and has been the major defensive structure of the city throughout history.

From Narikala we stroll down to Legvtakhevi canyon (translated as “Fig Ravine”) with small waterfall and river. From Legvtakhevi we continue walking in the old neighborhoods of Tbilisi – Sulfur bathhouse district, Shardeni and Erekle II streets, Maidan square, the modern glass Bridge of Peace, and Rustaveli Avenue. These areas have lots of outdoor cafes, bars, art galleries, handicraft, and souvenir shops.

On day 7 after breakfast at the hotel, we depart to the town of Gori - the center of the Kartli region.

Gori is the birthplace of the Soviet leader Joseph Stalin. Nowadays, his house functions as a museum and consists of the memorial house, exposition building with a tower, as well as Stalin’s study room from Kremlin and various personal belongings.

From Gori we drive to the Uplistsikhe cave complex, dating back to 1st millennium BC. Uplistsikhe is located 14 km away from Gori. Completely carved in rock, it is considered as one of the earliest urban settlements in Georgia.

From Uplistsikhe we return to west Georgia, passing through the Rikoti pass (996 m). It is possible to make several stops along the way at the markets of the local farmers who sell various food, fruit, and handmade goods.

After our arrival in Kutaisi – the center of the Imereti region, we are going to have a full day sightseeing tour of the city and its surroundings.

We will visit two well-known monuments from the Georgian Golden Era that are listed as World Heritage Sites by the UNESCO. First, Bagrati cathedral, built in the 11th c. and located in the city center of Kutaisi, on top of the hill. Second, Gelati Academy and Monastery, built in the 12th c. by the most prominent king in Georgian history David IV (David the Builder).

Breakfast at the hotel. Transfer to the Kutaisi Airport. Departure.

Additional charge for a single room ("Single Supplement") is: € 135