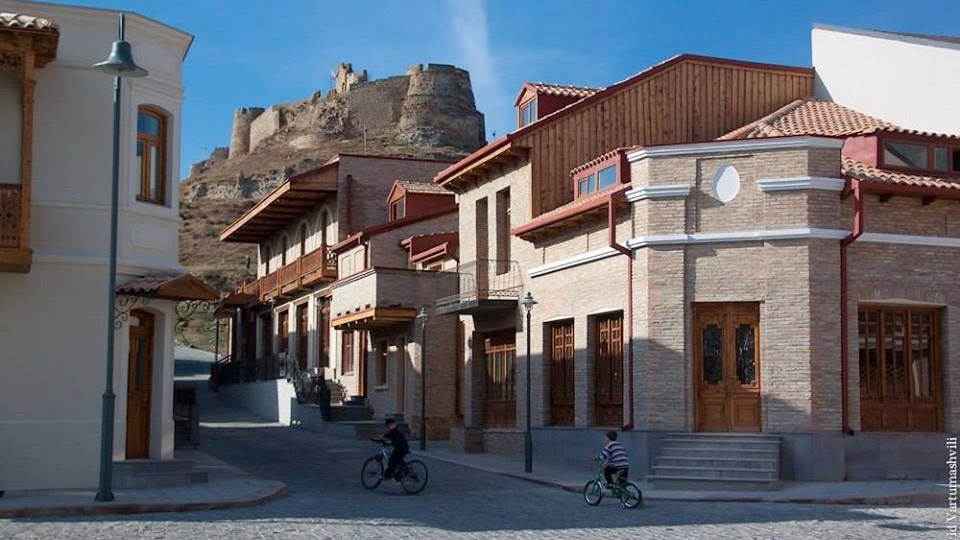 Gori streets and the Fortress

Gori is a town located at the confluence of the two rivers Liakhvi and Mtkvari on the lowlands of Kartli, East Georgia, with approximate number of 50 thousand inhabitants. Gori is popular tourist destination place because of its three major historical and architectural monuments: ancient cave town of Uplistsikhe (located in 15 kms from the town), museum of Joseph Stalin, and the medieval fortress and citadel "Goristsikhe".

Uplistsikhe is a cave-town carved in a rocky massif. It used to be a religious, political and cultural center of Kartli region in the Hellenistic and the late antiquity periods.

Gori Fortress (Goristsikhe) stands on the top of the rocky hill, inside the town. Fortress first appears in the 13th century sources; however, archaeological evidence proved that this place had been fortified even in the ancient times. Fortress has great strategic location and used to control important trade routes.

The museum of Joseph Stalin is situated in the center of his hometown Gori. The museum was founded in 1937. It is divided into three parts: a house, a museum and a railway carriage. One can see 60000 exhibits in the museum. There is Joseph Stalin

Joseph Stalin bronze 6 meters in height statue was moved in the yard of the museum after August war with Russia in 2008. It was constructed in 1952. The sculptor is Shota Mikautadze, the architects – Zakaria and Archil Qurdiani.

Gori historical-ethnographic museum was founded in 1935. It was named after Sergi Makalatia (a famous Georgian ethnographer) in 2005. There are almost 85000 exhibits in the museum: archeological, ethnographic, numismatic materials and etc.

Gori Drama Theater which is named after a prominent Georgian playwright and poet Giorgi Eristavi was opened in 1945.

Gori Virgin Mary church is located in the center of Gori, overlooked by the Gori Fortress. It was founded as a Catholic church in the beginning of the 19th century, later it was closed by the Soviet authorities. Nowadays it is an Orthodox church.

Ateni SiOni church was built in the 7th century. It is situated in the village Ateni.

Kvakhvreli Caves complex is situated near the village Kvakhvreli. It dates back to the early feudal times. The complex includes a church, corridors, a bell tower.

Ikorta church of the Archangel was founded in the 12th century. The leaders of the BakhtriOni uprising – Bidzina Cholokashvili, Shalva and Elizbar Eristavi are buried inside the church.

The main field of agriculture in Gori area is fruit growing and market gardening.

The European route E60 passes near the city.

There is a railway station in Gori.

There is a fishing industry company “Georgian Fish” in the village Karaleti. It was founded in 2011. They focus on trout. The company sells its products only in the territory of Georgia.

There is a restaurant “Fish House” in Gori. One can taste European-Georgian seafood here. Don't miss opportunity to have delicious dinner with life music in Shin Da Gori restaurant.