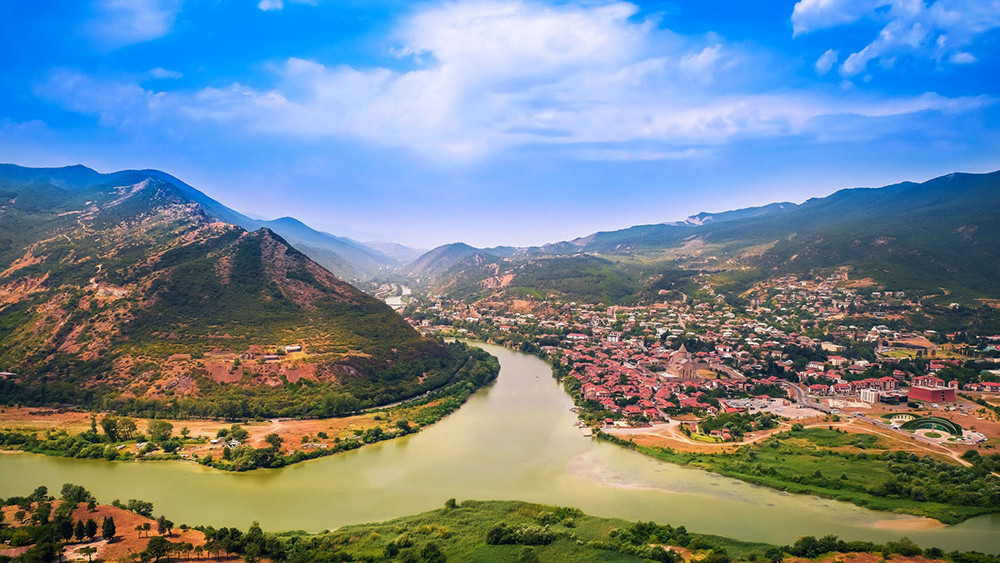 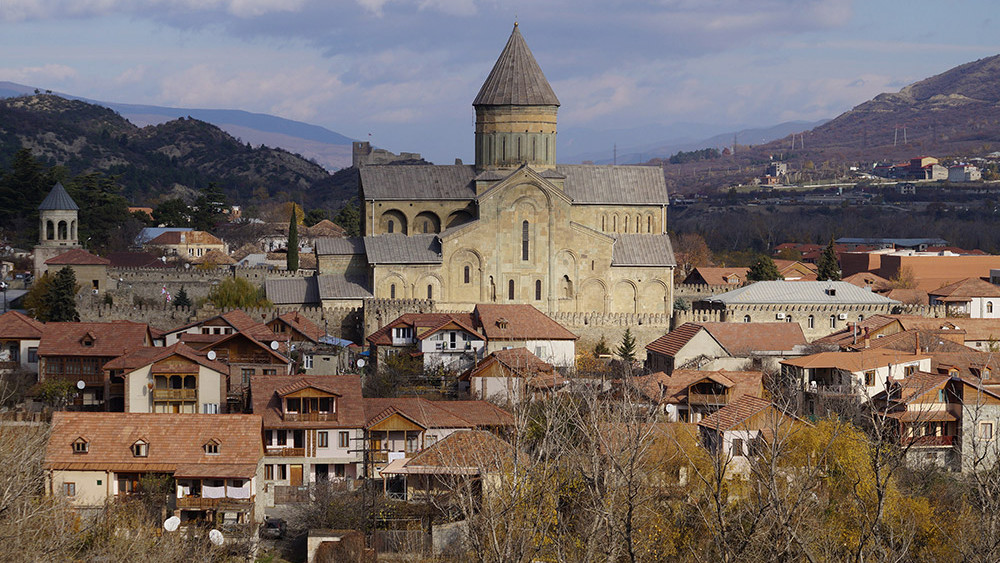 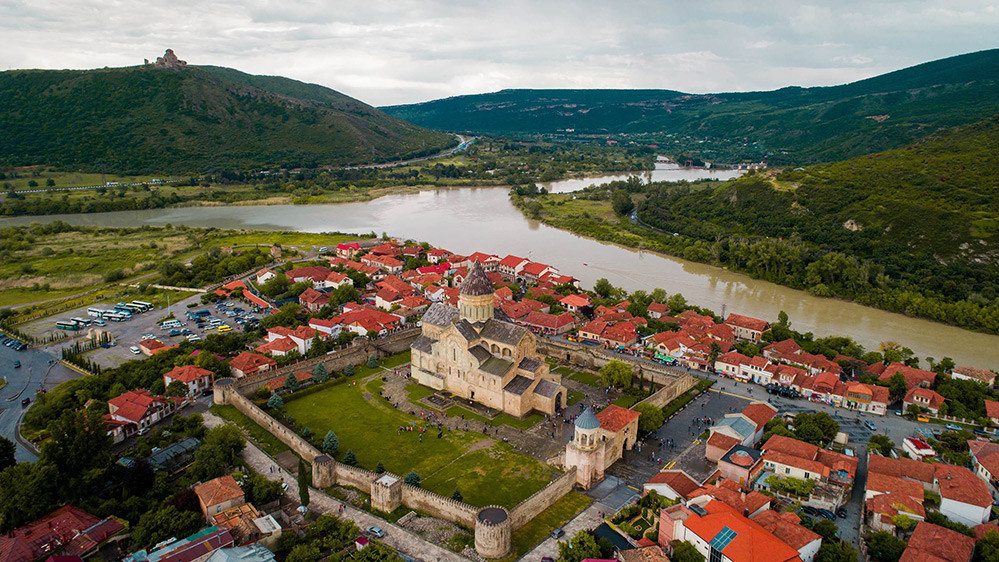 Mtskheta, the historical capital of the Kingdom of Kartli (from the 3rd century BC to the 5th century AD), is located 20 km from the capital of Georgia, Tbilisi. Because of the strategic location, Mtskheta had cultural, economic, political influence of Roman and Persian Empires through history. After it lost its status of the capital, Mtskheta continued to be the religious center of the country.

Mtskheta was the capital town of the early Georgian Kingdom of Iberia. Archaeological evidence trace human settlement in the area of Mtskheta from the 2nd millennium BC to early 1st millennium AD. Numerous burials of the Bronze Age (beginning of the 1st millennium BC) prove that Mtskheta already was a significant settlement at that period.

Mtskheta amazes with unique monuments of Georgian Orthodox architecture, some of which in 1994 were included in UNESCO World Heritage List under the name "Historical Monuments of Mtskheta". Big Mtskheta Archaeological Museum-Reserve integrates the city of Mtskheta, Samtavro mausoleum and burial ground (II millennium BC - early Middle Ages), Samtavro settlement (VIII-VII centuries BC), Armaztsikhe-Bagineti- the residence of the rulers of the Kingdom of Kartli (1st century BC - 8th century AD) and the acropolis. Armaziskhevi is a complex which includes the residence of the Pitiakhshevs (rulers) and their cemetery (2nd-4th centuries AD). BC), the residences of the kings of the Kartli and Iberian kingdoms and their mausoleums, Svetitskhoveli Cathedral (XI century), Samtavro Monastery (IV-XI centuries) and Jvari Monastery (VI century).

Written sources of The Chronicles of Georgia say: Mtskheta was founded by Mtskhetos, the son of Kartlos (Grandson of biblical Noa), eponymous ancestor of the Kartvelians (Georgians). The wall around the city was built by Ardam, ancestor of Nimrod. By another version, more accepted by historians, Mtskheta was founded by the ancient Meschian tribes (Meschos, another son of Kartlos - Grandson of biblical Noa) in the 5th century.

The city was strongly fortified at that period. Walls were on both sides of Mtkvari River, and three forts were protecting it. The main citadel, Armazi, on Mount Bagineti was controlling the entrance from south and east, Tsitsamuri, at the base of Mount Jvari from the north, and Sarkine from the west.

A gravestone dated between the end of 4th and beginning and 5th centuries, found in Samtavro necropolis, contains an epitaph in Greek, telling about the main architect and archizograph (artist) of Mtskheta Aurelius Acholis.

The town was built on the conjunction of the river Mtkvari and Aragvi. When king Mirian adopted Christianity back in 337, he erected a wooden cross on top of the mountain. Later in the 6th century Jvari Monastery was built there. The word “Jvari” is translated as a “cross.”

The early inscriptions are of a special significance. They form a valuable reference to the study of the origins of the early Georgian alphabet Samtavro necropolis, a burial place north of the monastery-dated between the middle of the 3rd millennium BC and the 10th century.

Behind Svetitskhoveli Cathedral, on the right bank of the Aragvi River stands Antioch-the nunnery, built in the 4th-5th centuries. This ancient historical monument consists of the hall of the Church of St. Stephen the First Martyr (VII-VIII centuries), the gate and a watchtower on top (XVI-XVII centuries). Several nuns conduct Christian activities here and prayers are offered every Sunday.

In the outskirts of Mtskheta are the ruins of Armaztsikhe fortress 3-rd c BC, the Armaztsikhe acropolis (dating to the late 1st century BC), remains of a "Pompey's bridge" (built by Roman legionnaires in 1st c BC), the fragmentary remains of a royal palace (1-st–3-rd c AD), a nearby tomb of the 1-st c AD, and the fortress of Bebris Tsikhe 14th c. The Institute of Archaeology and the garden of Mikheil Mamulashvili are also worthy of note. Here stands a monument to sculptor Elena Machabeli.

A mausoleum of rich woman from the 1st century AD was recovered near Mtskheta train station. The structure imitates the house with well-processed quadrats and a fronton. The roof was covered with the tile. Among the findings inside the mausoleum was a small bronze statue of young man playing flute.

Armazi Tsikhe is a historic archaeological monument situated along the Mtskheta-Tbilisi highway. The name comes from the most important local pre-Christian god Armazi.

Situated in a forest near Mtskheta, Shio-Mgvime Monastery integrates several buildings. The oldest one was built in the 6th century – cave of St. Shio. The legend says that one of the thirteen Syrian fathers, Father Shio settled in this area. “Mgvime” translates from Georgian as a grotto, cave.

Between the Shio-Mgvime Monastery and the so-called Hell's Gorge (in Georgian - Dzhojokhetis Khevi), 8 km. from Mtskheta, on the slopes of the Sarkineti and Grdzeli Mindori mountains, there is the ancient city of Sarkine.

The Dzalisi Archaeological Site is located in the Mukhrani valley (Mtskheta municipality). During excavations, unique historical monuments of the Hellenistic and Roman periods were found here: a palace, public baths of the 2nd-4th centuries, a swimming pool, a temple with a unique mosaic floor dating from the 2nd-3rd centuries. The mosaic depicts the heroes of Greek mythology - Princess Ariadne and the god of winemaking and fertility-Dionysus.