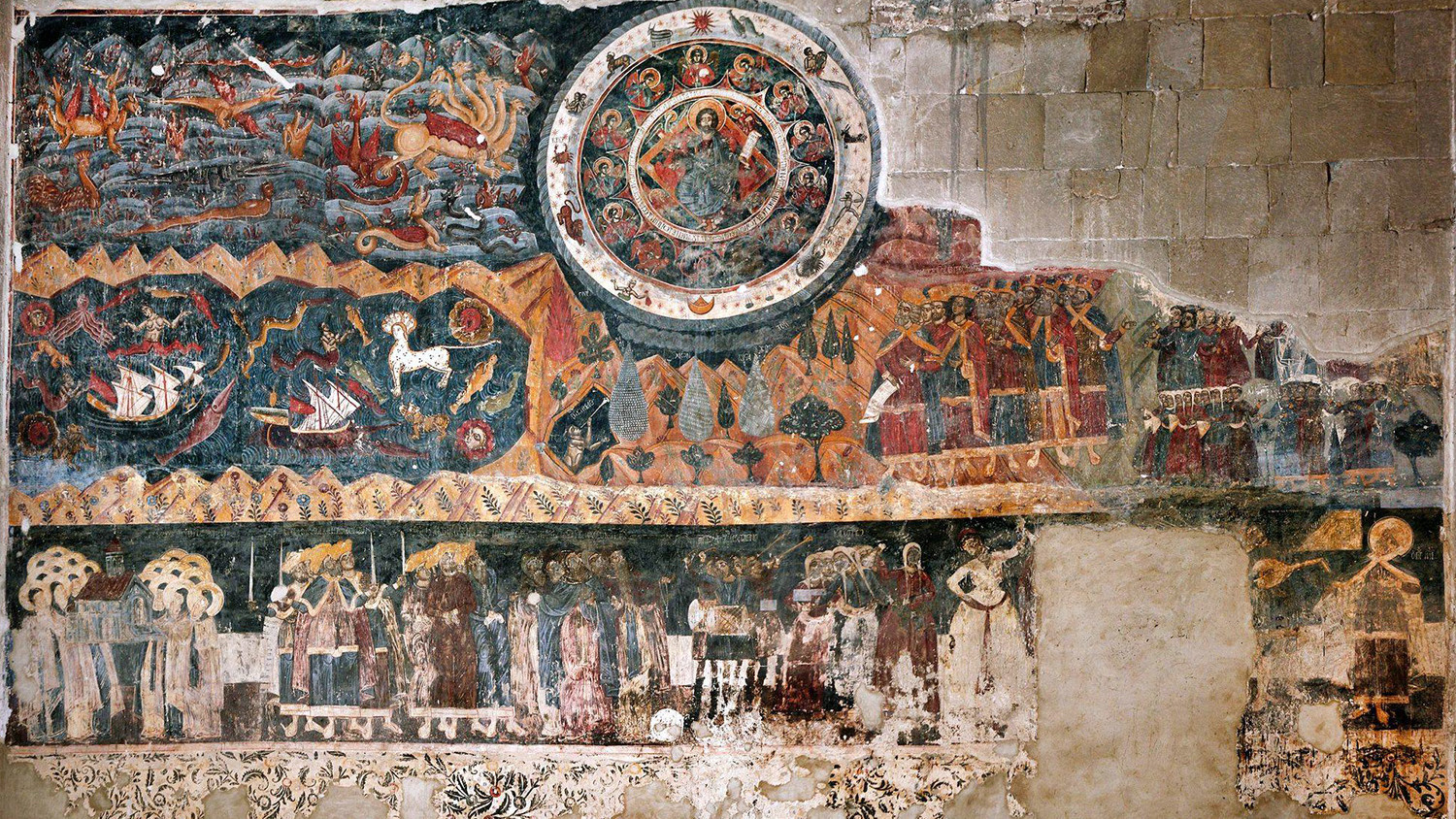 The masterpiece of mediaeval Georgian architecture Svetitskhoveli is the main Orthodox Christian Cathedral in Georgia. This is the main pilgrimage place on the Silk Road, the burial place of the Christ’s Robe, the tomb place of Georgian Kings and the most frequently visited place in Georgia. Built in 1010-1029 cc, it is listed as UNESCO World Heritage Site.

The name Svetitskhoveli is translated as a “live-giving pillar”.

The history of the monument dates back to the 1st century A.D. According to the legend a part of the Lord's tunic fell into the hands of a Mtskheta dweller, local Jewish man Eliazar, who had witnessed the crucifixion of Jesus Christ. Eliazar brought the tunic to Georgia. In Mtskheta he was met by his sister, Sidonia. She strained the tunic to her breast and gave her soul to God. No one could take the precious thing from Sidonia's hands and therefore she was buried holding the tunic. On her grave a miraculous tree grew under which curative sweet-smelling liquid streamed throughout summer and winter.

In 337 king Mirian declared Christianity as the state religion of Iberia kingdom (now days East Georgia) and decided to build the main temple on the place where the Lord's tunic was buried. The cathedral which began its life as a wooden church was named a ‘Living pillar’ because of the main pillar which was cut from the sacred tree growing on Sidonia's grave.

The first stone cathedral was built in 6th century. Today the remains of the decorated pillars can be observed under the transparent glass floor.

The current construction was built in 1029 by the Georgian architect Arsukidze.

The cathedral differs in its artistic value, magnificence, harmony and the special role it has played in the history the country.

The Cathedral is 54 meters height under the dome and is among five tallest cathedrals of mediaeval Georgia.

It was and is located in the historical town of Mtskheta, the former capital of the kingdom of Iberia.

The cathedral differs in its artistic value, magnificence, harmony and the special role it has played in the history and art of the country. The décor of the western façade is the most relief and artistically ornamented part of the Cathedral, which nearly has fully preserved its original form. Asymmetry characteristic to the Cathedral is better seen on the southern façade.

A western part of the southern façade preserves an interesting composition of relief and sculptural figures dated to the period of the Cathedral construction. The eastern façade, as compared with other facades, is symmetric and differs in variety and mastery of ornaments. A system of decorative arches is used on the northern façade, the central arch being elevated stressing the Cathedral's height, 54 meters.

Some scholars claim that Alexander the First in 15th century renovated almost completely demolished cathedral. Svetitskhoveli reached our time bearing the ornamentation and interior paintings of those days. A well-known zodiac circle is the only one in the whole Georgia. The first sun clock with the shape of a peacock is depicted on the exterior wall of the cathedral.

In 1787, King Erekle ordered a wall to be built around the cathedral.

The monument, full of legends, still amazes its visitors. Svetitskhoveli is a favorite place for local people, young couples and tourists, who can observe colorful wedding ceremOnies there every weekend.

Admission is limited during the Sunday liturgy and ceremonial mess on weekdays.

Dress code is applied on all territory of Svetitskhoveli including the yard around the cathedral and the church.