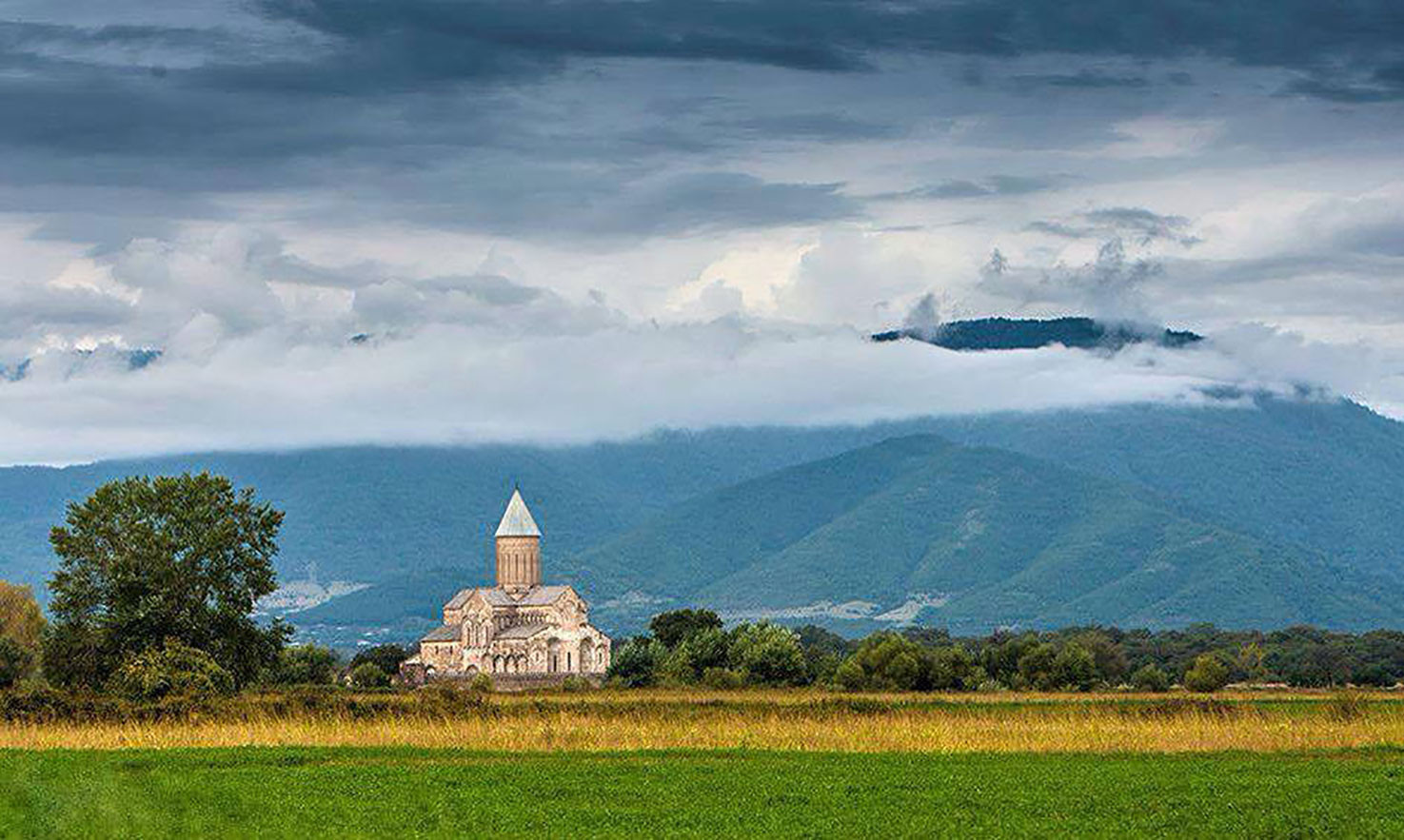 The first church was built in 6th c, when the split of Eastern and Western Christianity occurred and 13 Assyrian Fathers arrived in Georgia from Antioch. They settled in different parts of Georgia and established monasteries mainly initiated the ascetic movement. One of the monks Ioseb came to Kakheti, the village Alaverdi, which was the center of the Moon cult. The remains of 6th c church and grave stone of Ioseb Alaverdeli and his disciple can be seen even today inside the Northern part of the resent Cathedral.

The main structure of present Cathedral belongs to the early 11th c, when King Kvirike III the Great of Kakheti built a cathedral on the place of the 6th c church and established a monastery.

The cathedral was innumerous times attacked and damaged by devastating invasion of Persians, but renovations were done in 17th-18th cc, in 19th and 20th.

Alaverdi St. George Cathedral is beautifully set on the Alazani River valley between two towns in Kakheti region Akhmeta (17 km) and Telavi (20 km). It dominates the surrounding landscape. The splendid vineyards, fertile river valley and the background of Great Caucasus Mountains attract the visitors. It belongs to the Cross-Cupola type church with longer western part of the building and it is the tallest in Georgia mediaeval architecture - 56 m under the dome.

The walls are constructed in the manner of Kakheti architecture - the decor is totally neglected, fieldstone façades with hewn slabs of the Shirimi water tuff and upward aspiring tendency. The yard enclosed by a fortified wall of later period (17th-18th cc) contains monastery, monk’s dwellings, the refectory, wine cellars and other structures.

The interior is extremely impressive – high arches are droving the cross in the upper register of construction and day light is well organized, concentrating natural light in the middle part: 16 windows around the cupola drum, the middle register windows from three sides and wide space around – all environment gives feeling, you see the real masterpiece of medieval architecture.

Cathedral interior was white-washed in Russian church manner in 19th c, but some frescoes are cleaned recently. High ceilings and monumental arches display ancient inscriptions and eight centuries-old fading frescoes. Over the Western entrance there is the 16th-century fresco of St. George and Dragon. The frescoes of Virgin Mary with the Child and of Archangels Michael and Gabriel on the opposite side above the altar, belong to the 15th century, the fresco of Holy Fathers and sacred ornaments date back to the 11th century. The rest of the frescoes are faded to the point where it’s hard to tell their date.

Many visitors come to Alaverdi not just for learning its historical value or admiring beautiful frescoes inside, but also to visit one of the oldest (11th c) winemaking spots in Georgia - Alaverdi Monastery Caller and taste delicious traditional wines, made by monks. The original 11th c qvevri (the underground clay amphora), which is cracked at the mouth due to its age, is still on display.

Recently renovated, millennium-old winery is not generally open to visitors, but the Cafe across the road Matsvnis Sakhli sells bottles of traditionally made Alaverdi wine, with the slogan 'Since 1011'.

An annual festival of the Monastery - Alaverdoba is usually held at the end of September and celebrates grape harvest. On this day people come here from remote mountain areas to pray, celebrate and enjoy Alaverdi wine.