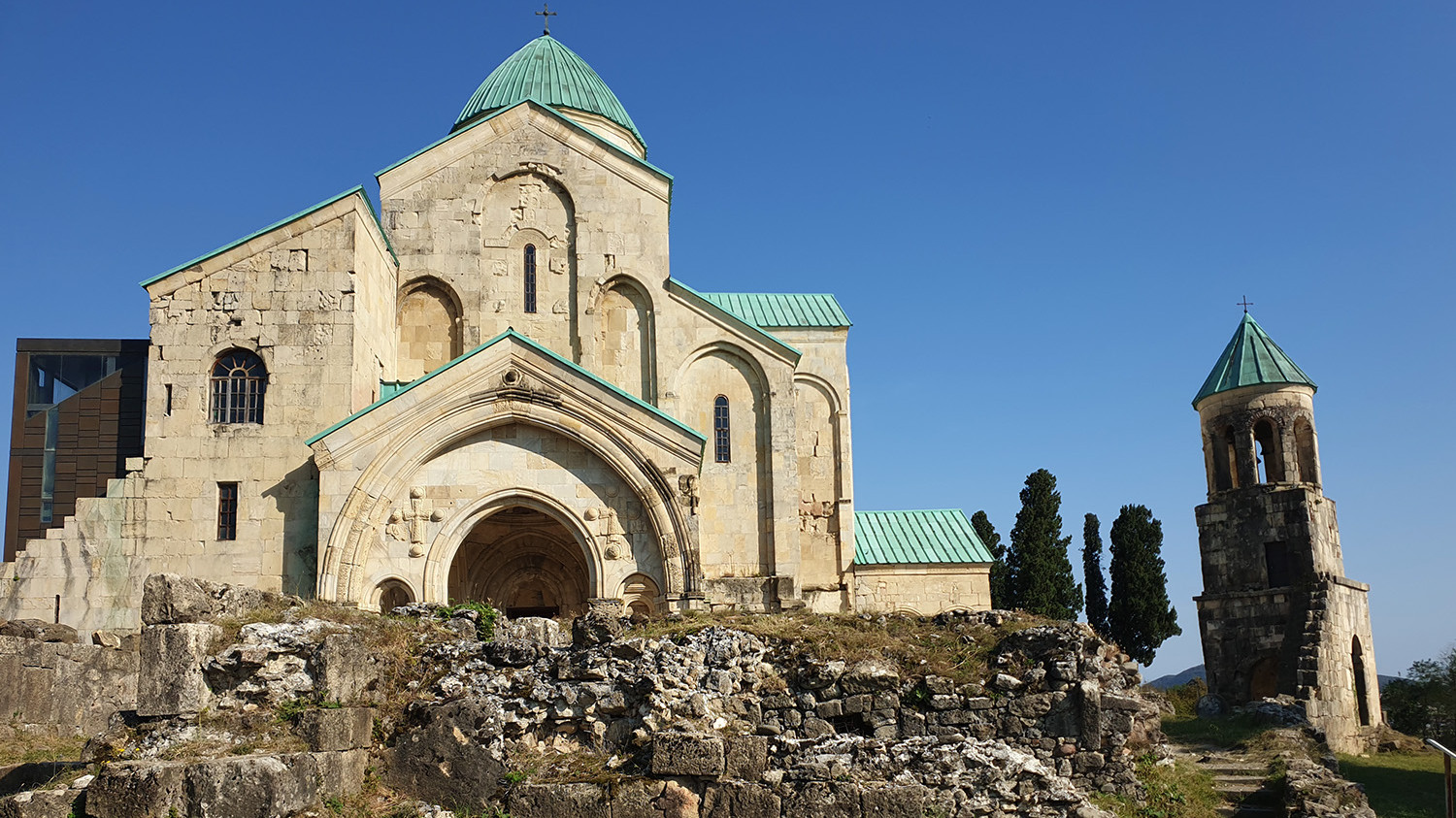 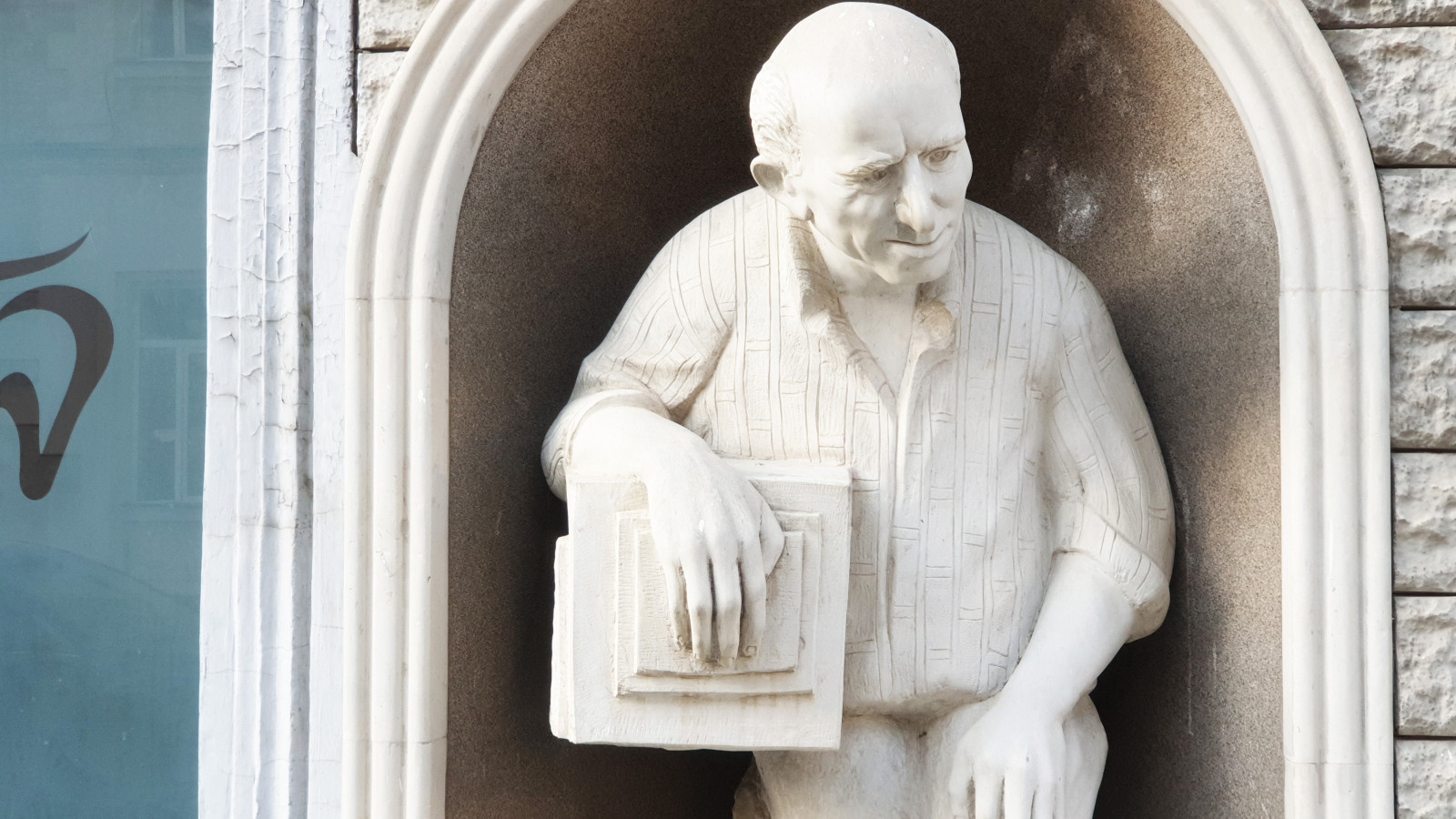 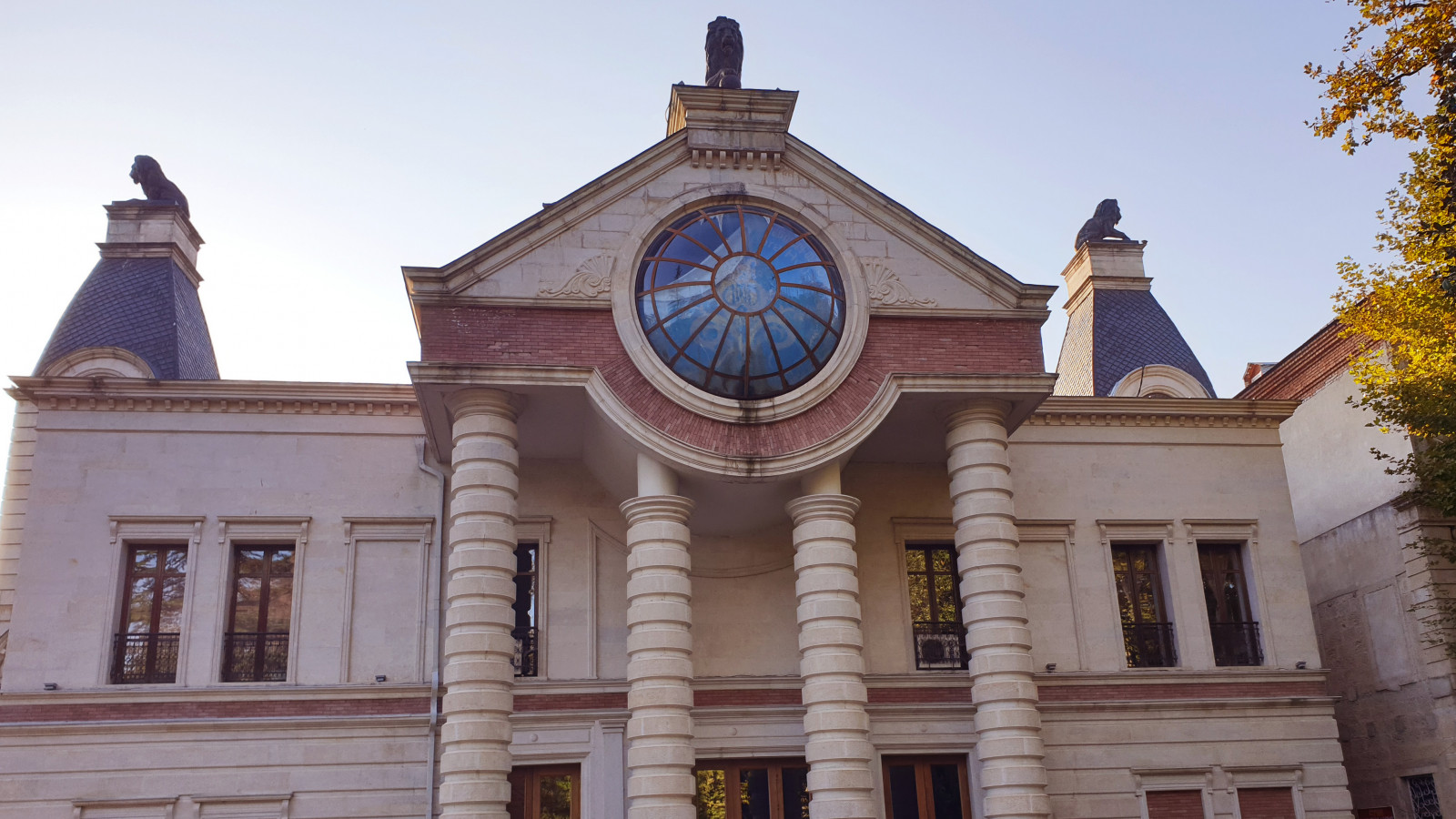 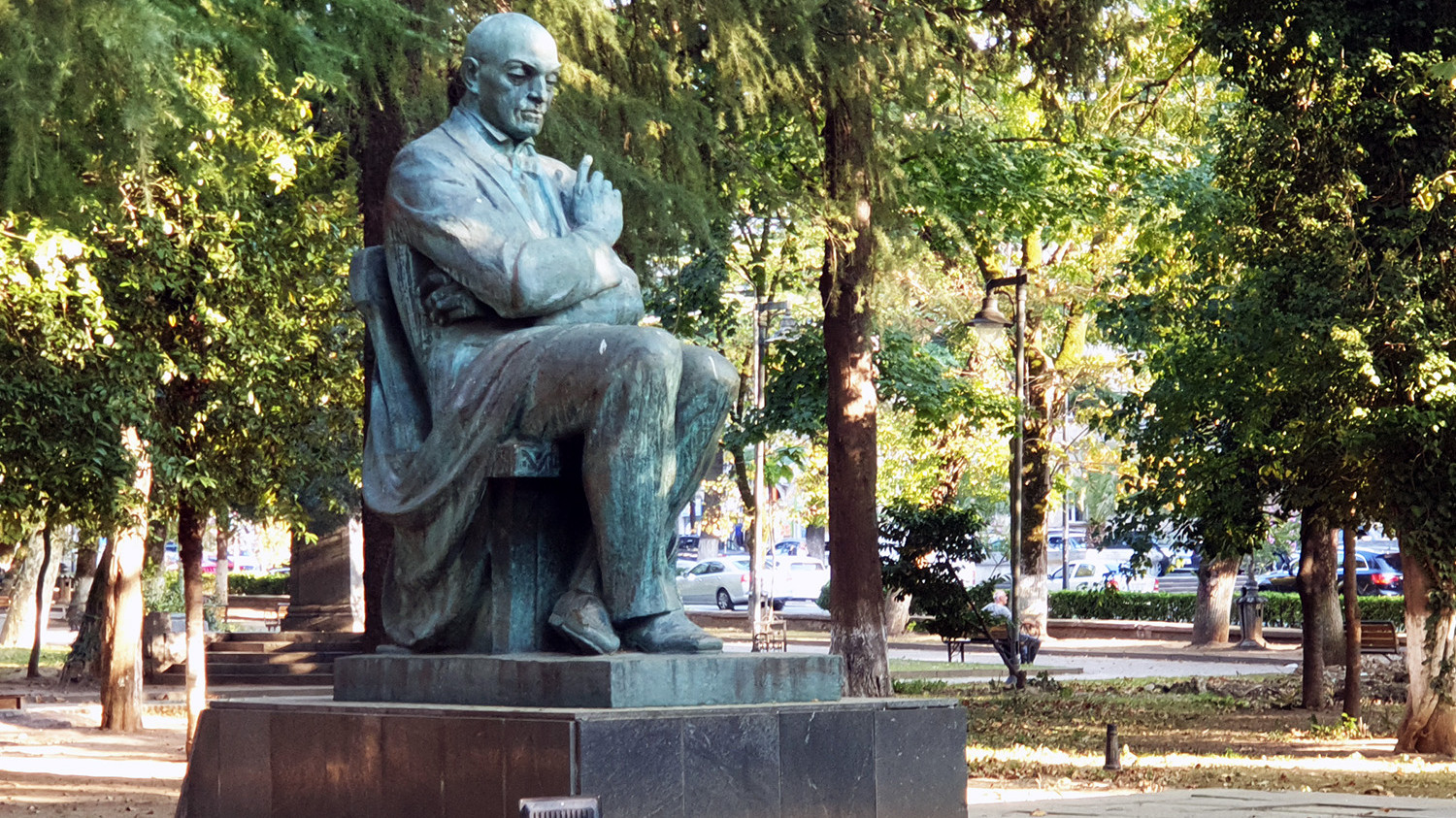 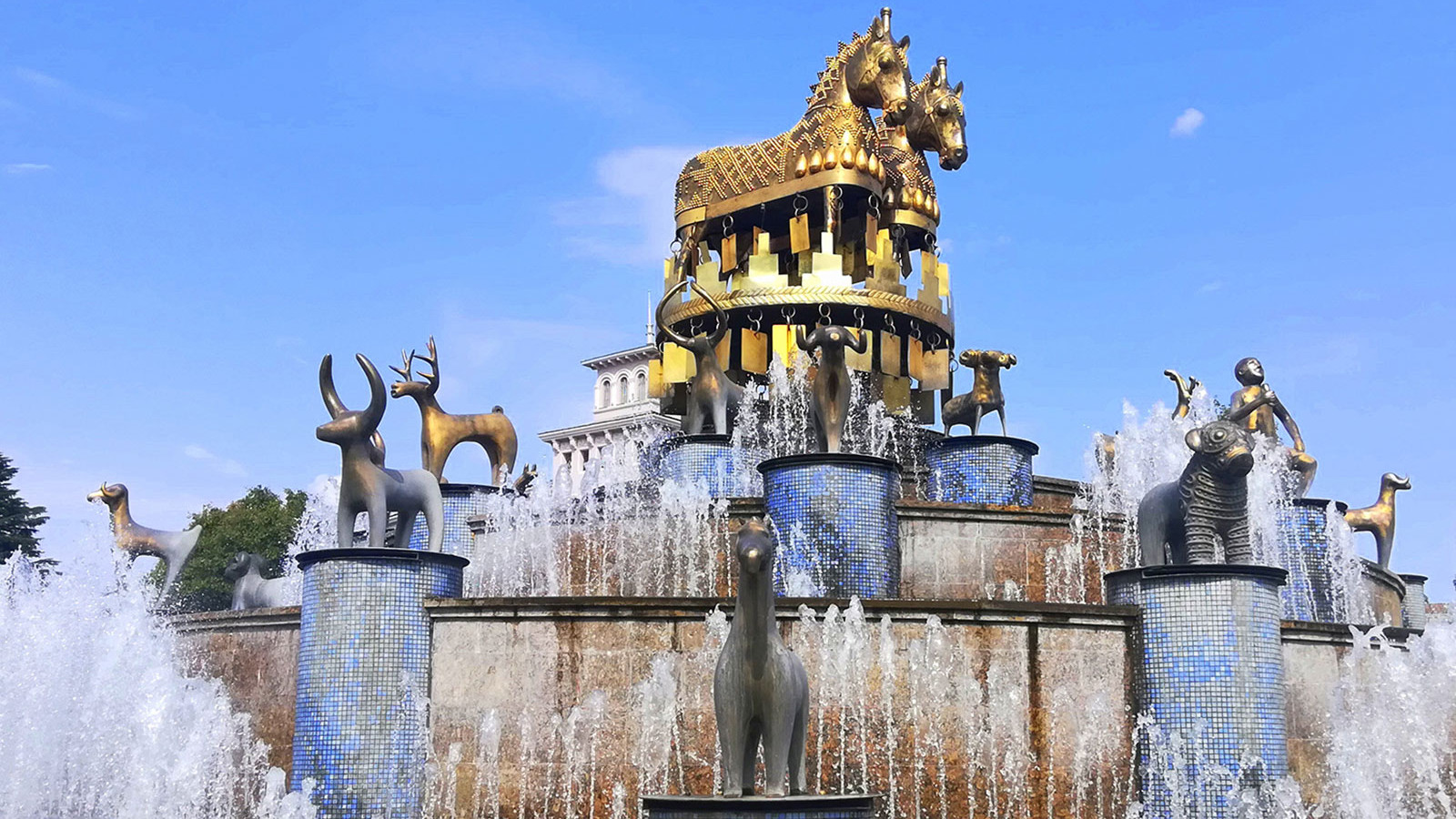 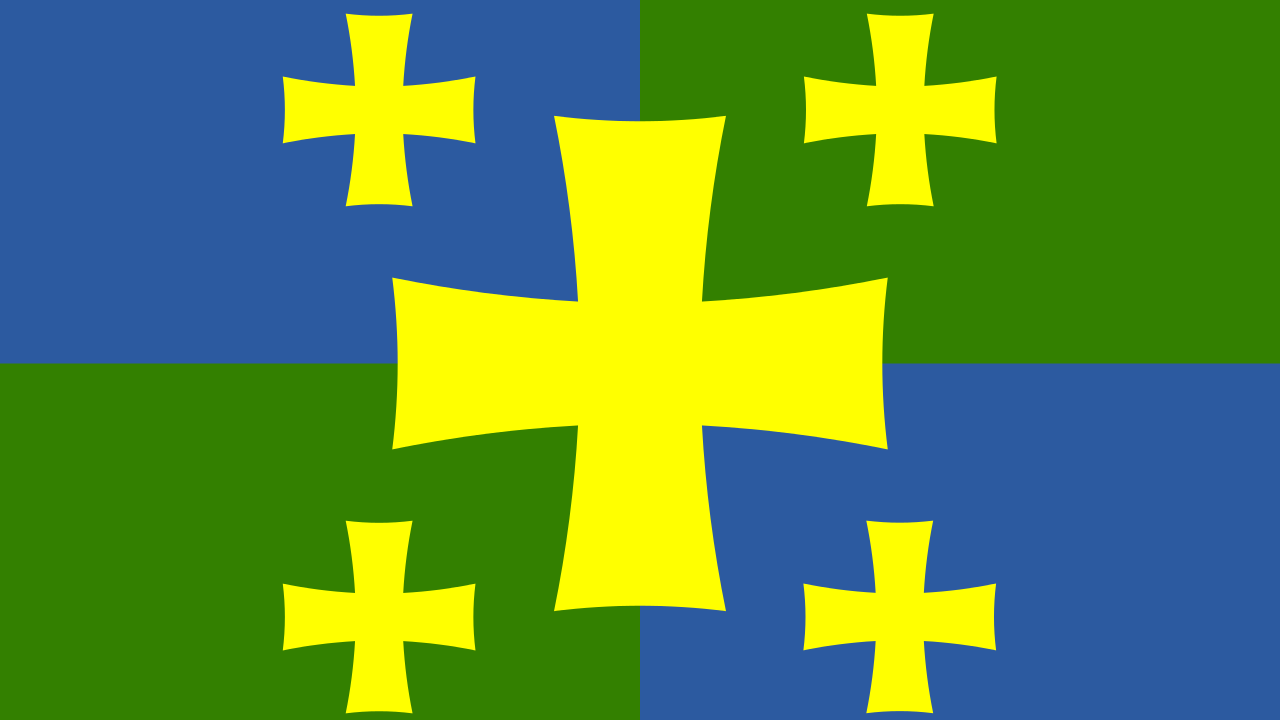 flag of the municipality of Kutaisi

Enlisted as one of Europe’s oldest cities, Kutaisi holds remarkable cultural values not only for Georgian history, but also for UNESCO World Heritage.

The ancient written source about Kutaisi could be considered Argonautica, a Greek epic poem about Jason and the Argonauts and their journey to Colchis Kingdom. According to this legend, Jason sealed a wooden ship Argo from Black Sea upwards to Rioni River and visited the city Aia ruled by King Aeëtes, or Aeeta. The city name Aia after the centuries changed to Kut-aia. Georgian word "Kuat" means "stony". Archaeological evidences indicate on well-developed settlements here in 6-5th cc.

Kutaisi used to serve at various periods as the capital of successive kingdoms: Iberia, Lazika, Imereti, Abkhazia and Ancient Colchis, the latter was famous for its gold mining culture. From 1008 to 1122 Kutaisi became the capital of United Georgia Kingdom and a seat of Bagrationi Dynasty. Russian-Turkish war and the annexation of Imereti Kingdom in 1810 turned the city into a provincial settlement of Russian Empire.

Today Kutaisi represents an administrative center of Imereti Region, the third largest city of Georgia, with 135 201 inhabitants (2020). In October 2012 Kutaisi became the parliamentary legislative seat, until it was moved back to Tbilisi.

The city lends cosmopolitan vibrancy to its small-town charm by serving as a transportation hub for domestic and trans-European air travel, via low-cost carriers Wizz Air, Flydubai, Ryanair and SkyUp Airlines. Batumi, Zugdidi, Svaneti, Tbilisi are within reach of Kutaisi Airport by bus and taxi. In future a train station is expected to open at the airport, which will ensure fast and seamless travel.

Kutaisi attracts the visitors with its beautiful natural scenery and impressive architectural monuments, such as mediaeval cathedrals, futuristic parliament building, quaint cafes, widely esteemed delicious Imeretian cuisine and trendy wine houses, where you can shop famous Imeretian wines: Tsolikouri, Tsitska and Krakhuna. White, Red and Iron bridges across the river Rioni connect both sides of the town. Green Bazaar is right there, on a walking distance from these famous bridges. One of the must visit places in the town is the Bazaar - with multiple stalls of fresh fruits and vegetables, sweets, meat, walnuts, variety of spices, massive wheels of cheese and Imeretian organic products.

Here is a guide to the best attractions you should visit while being in Kutaisi:

Bagrati Cathedral (975-1014)-possessing architectural and artistic merit, the cathedral is one of the most iconic examples of medieval architecture considered a symbol of united Georgia.

Kutaisi Opera House (founded in 1969), Lado Meskhisvili Drama Theater (has a 100 year-old history) and Puppet Theater are close to the main round-about square of Kutaisi.

There are several parks in Kutaisi:

Kutaisi Botanical Garden – charming place on Rioni River bank, this oldest garden is distinguished for its unique chapel inside a tree.

Central City Park also known as the Boulevard (1840) - a beautiful and relaxing green space located next to Colchis Fountain. There are some statues and monuments in the park with plaques, written in both Georgian and English.

Kutaisi State Historical Museum (1912)- officially known as Niko Berdzenishvili Kutaisi State History Museum is considered one of the major scientific-research centers in Georgia with its advanced research laboratory and library.

David Kakabadze Fine Art Gallery on #8 Shota Rustaveli street houses collections of the 19th and 20th century artists. There are other museums on a walking distance from each other: National Museum of Military Glory, Kutaisi Museum of Sport, Kutaisi Museum of Martial Art, Zakaria Paliashvili Museum

Kutaisi Synagogue (1885) - the largest Synagogue in Kutaisi can seat 500 worshipers. It is located in once historic Jewish Quarter and operates for Shabbat and Feasts.

The sites to visit near Kutaisi:

Gelati Monastery and Academy(1106) – 9 km from Kutaisi - a masterpiece of Georgia's medieval renaissance and treasured educational, religious and cultural landmark. One of the largest medieval Orthodox monastics is preserved in the cathedral (UNESCO world heritage site).

Motsameta Monastery (8th century)-known as "Place of the Martyrs" this majestic complex was built to honor fallen heroes David and Konstantine Mkheidze - Princes of Argveti. According to ancient superstition associated with Motsameta, if one crawls three times under the tomb of the saints and makes a wish without touching it, then their wish will come true.

Okatse Canyon - one of the most famous natural attractions is located in the village Zeda Gordi, Imereti region. 2 km long and 50 m wide canyon is divided into two parts: “First Canyon” and the “Bottom”.

The 2300 m long stone paved path leads through Dadiani historical forest-park, 780 m long hanging cliff trail and ends with a 20m long panoramic view at the incredible scenery, where you can take photos.

Book private tours with us listed below or contact our travel expert here: