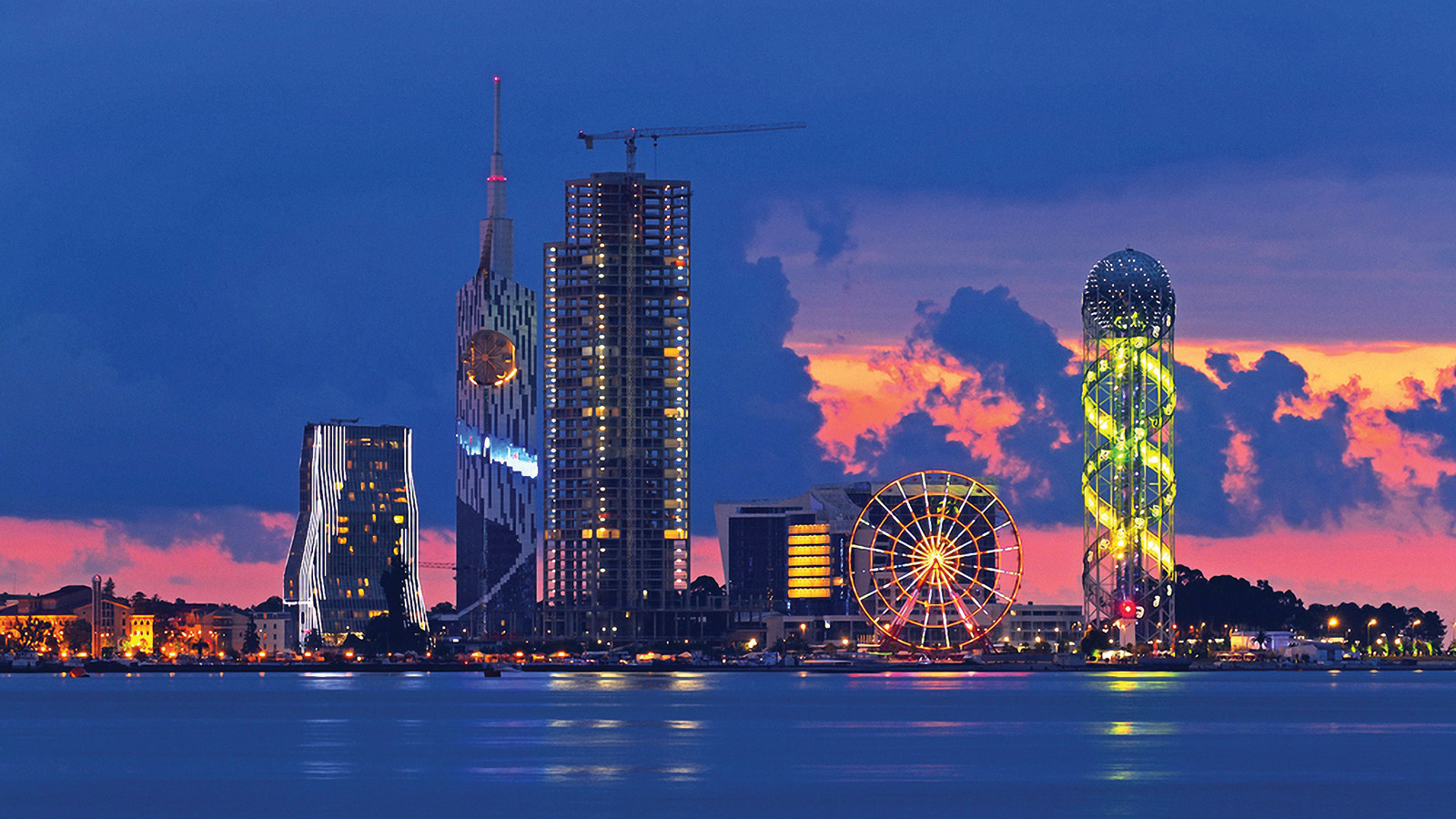 Batumi and its Surroundings

Black Sea port and resort city Batumi is the capital of the Autonomous Republic of Adjara. Now Batumi is the second largest city in Georgia with Population 155,000 (2016). Dynamic architecture, ancient history, attractive surroundings, warm and sunny seaside, and delicious Adjarian cuisine makes this city a beautiful resort and one of the top places to visit.

Batumi was built at the end of the 19th and at the beginning of the 20th century in a grand, elegant style. There are fine classical buildings designed and built by Italian and German architects, lots of palm trees, exotic flowers - the jewel of the Georgian Riviera. Batumi is a major port and resort city. Batumi Boulevard, the main promenade with fountains and cafes, attracts numerous holidaymakers with its greenery and location.

Batumi Piazza is located in the center of the capital of Adjara, Batumi. The biggest figurative marble mosaic in Europe is situated on the piazza square. The idea of the mosaic is to show the harmony between sea elements and a continual urban expanse.

Another famous square in Batumi is called Europe Square (former Era Square). The main highlight of the place is fountain area and the statue of Medea, the daughter of King Aeetes of Cloches, holding the Golden Fleece. The statue illustrates Georgia’s connection with classic Greek culture.

Batumi Botanical Garden in Chakvi, 9km north from the town at Mtsvane Kontskhi (Green Cape), covers 113 hectares along the Black sea coastline and is well worth of the pleasant walk. Botanical Garden houses unique species of plants from various parts of the world.

Batumi Delphinium and Aquarium, which is more than 40 years old, was the first delphinium in the former Soviet Union. Here the visitors can discover bottlenose dolphins, also find sea lions.

Batumi Archaeological Museum is believed to be one of the oldest museums in Georgia. Visitors can see more than 22800 exhibits. The items in the museums date back to the Stone, Iron, Middle Ages. Several things show the influence of Arabic and Ottoman Empires on Adjara. Another museum can be seen only 2 km from Batumi center. The ethnographic museum Borjghalo covers 3000 m². More than 60 mannequins show the traditions of Adjarian people. Visitors will find wax figures dressed in traditional clothes. The owner of the museum is always telling stories about different families of Adjara.

25 Meters Chacha Tower is located in the center of Batumi. Chacha is a traditional Georgian alcoholic drink, distilled from grapes. It is like vodka but is much stronger. It is surrounded by four pools which enable the visitors to taste chacha for free.

The monument Ali and Nino was erected in 2011 in Batumi. It is a moving steel sculpture 8 meters in height. Every night the monuments of lovers begin to move, embrace, and then pass through each other.

Not far from the mentioned monument, one can see the famous 130 meters high Alphabetic Tower, which represents 6 floor panoramic watch tower and is designed by Georgian alphabet with 33 letters. Each of the letters is 4 meters high. An elevator takes passengers to the top observation platform to enjoy the city, mountain and Black Sea views.

Batumi State Maritime Academy was opened in 1929. Maritime faculty offers bachelor’s programs in maritime navigation, engineering, and electromechanical. Shota Rustaveli State University in Batumi is named after famous Georgian poet Shota Rustaveli. It was founded as a boy’s gymnasium in 1895. Later it turned into a pedagogical university. Outside of the city center, The Batumi Arts Center is located along the seafront. It is the home of Batumi State Musical Center Opera Studio, Musical Theatre of Youth, Batumi State Symphony Orchestra, Batumi State Cappella, and quartet NOTA. The visitor has an opportunity to attend 150 different concerts or events every year.

Batumi Sea Port was active even during the ancient times when the Roman Empire used it for trading. The total throughput of the Port is 18 million tons per year, 5 terminals. Batumi Oil Terminal is located on the Black Sea shore and offers its customers transhipment services for crude oil and oil products from Kazakhstan, Azerbaijan, Turkmenistan, Georgia, and other countries. On the border of Georgia and Turkey, one can see the Sarpi border checkpoint, which was opened in 2011. During the summer 1000 trucks, 2000 passenger cars, 400 buses, and 25,000 pedestrians cross the border each day.

Batumi was declared the best tourist destination by the American Academy of Hospitality Sciences in 2012 and was chosen by Forbes as the top five ‘velvet season’ recreational resorts. However, this doesn’t mean that Batumi is suitable for only ‘velvet season’ activities. You can visit the city all year round for business or recreation. Batumi is a perfect destination whether for high-profile international meetings or family weekends. Batumi city is beautiful and desirable in any weather.

Batumi is welcoming you!

Check the private tours below: