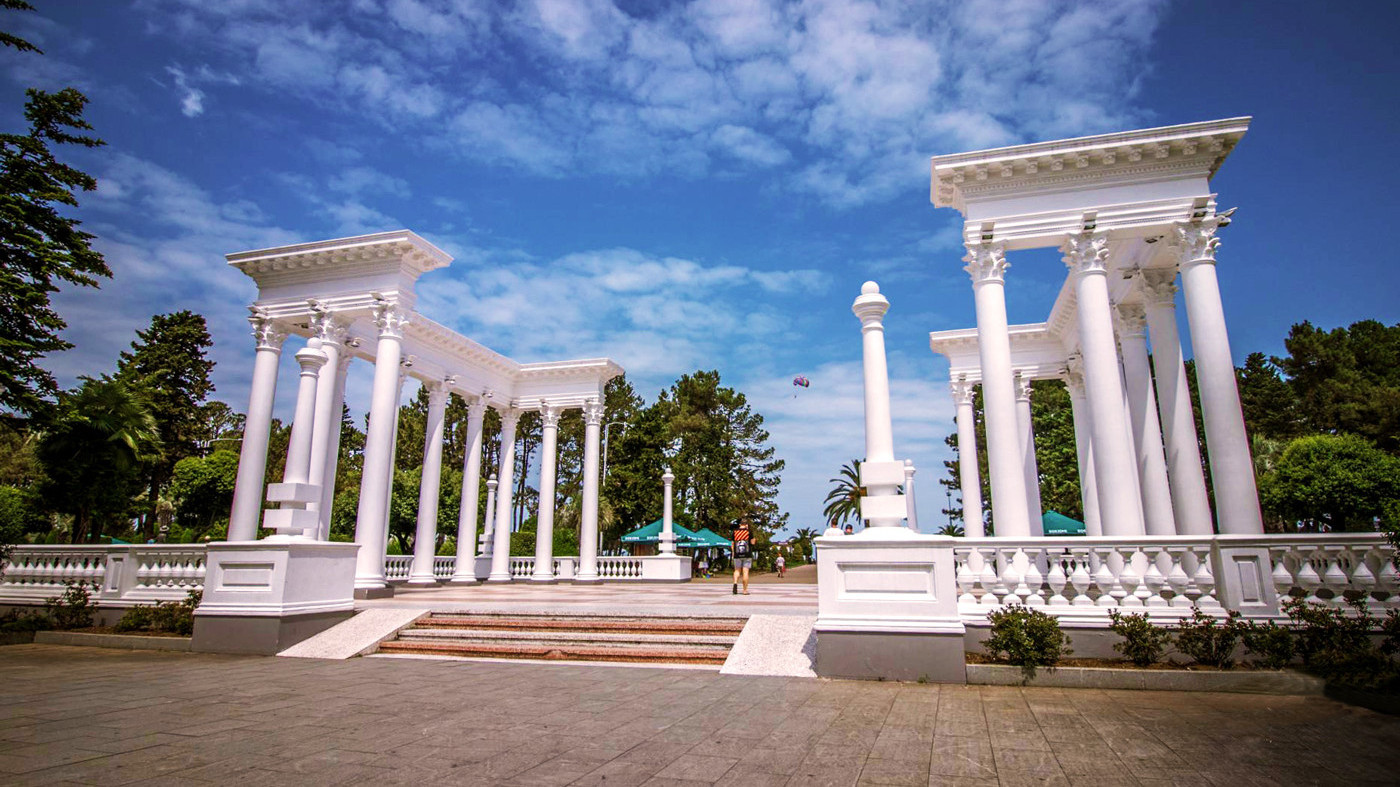 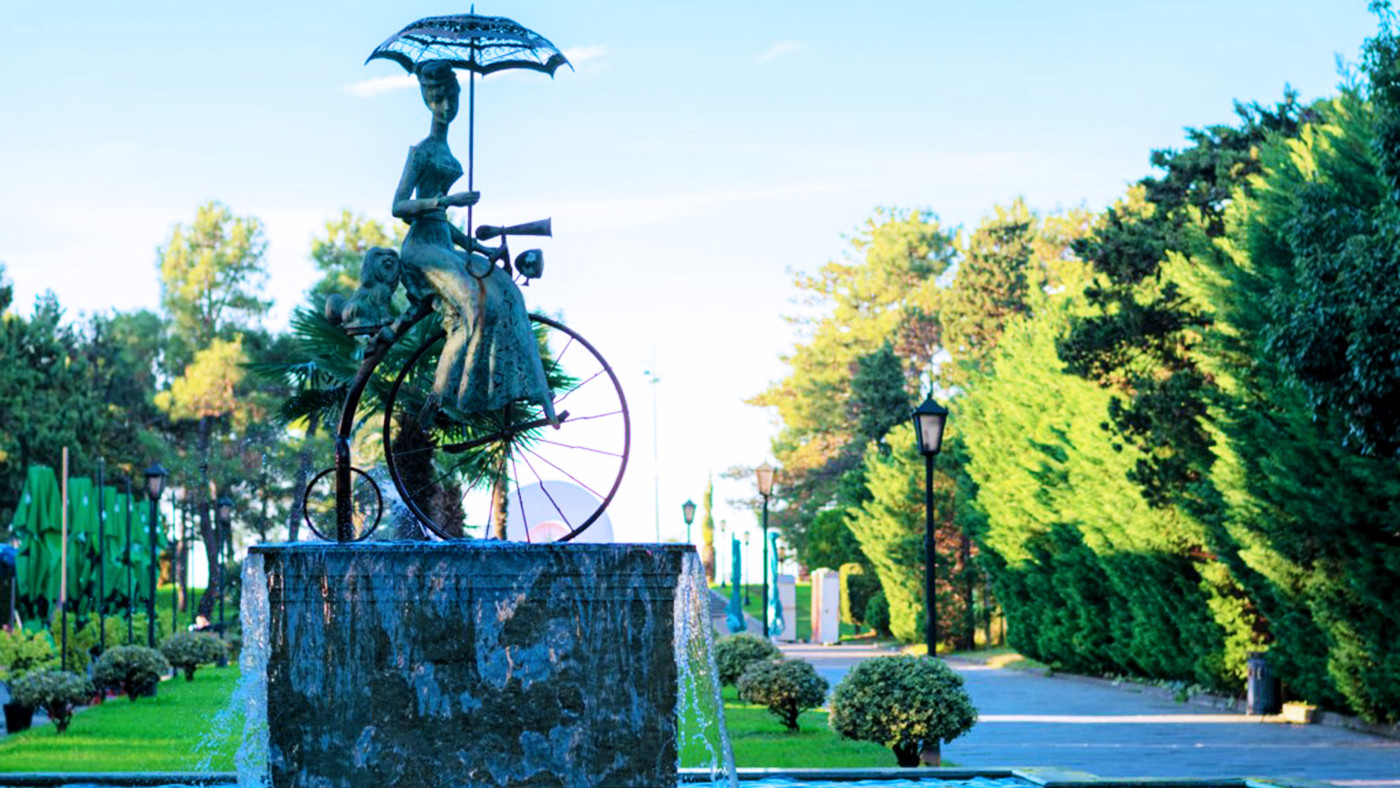 Lady with a dog on a bicycle 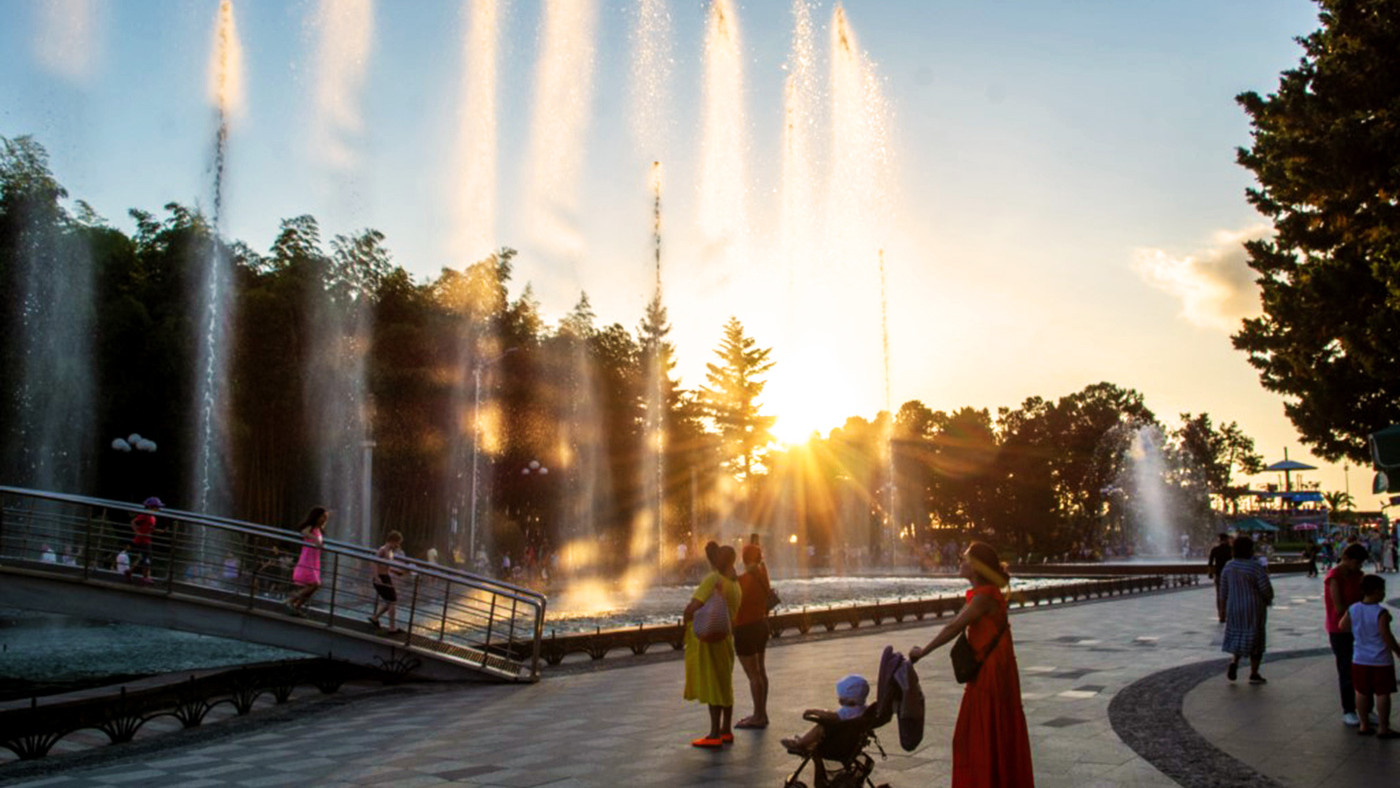 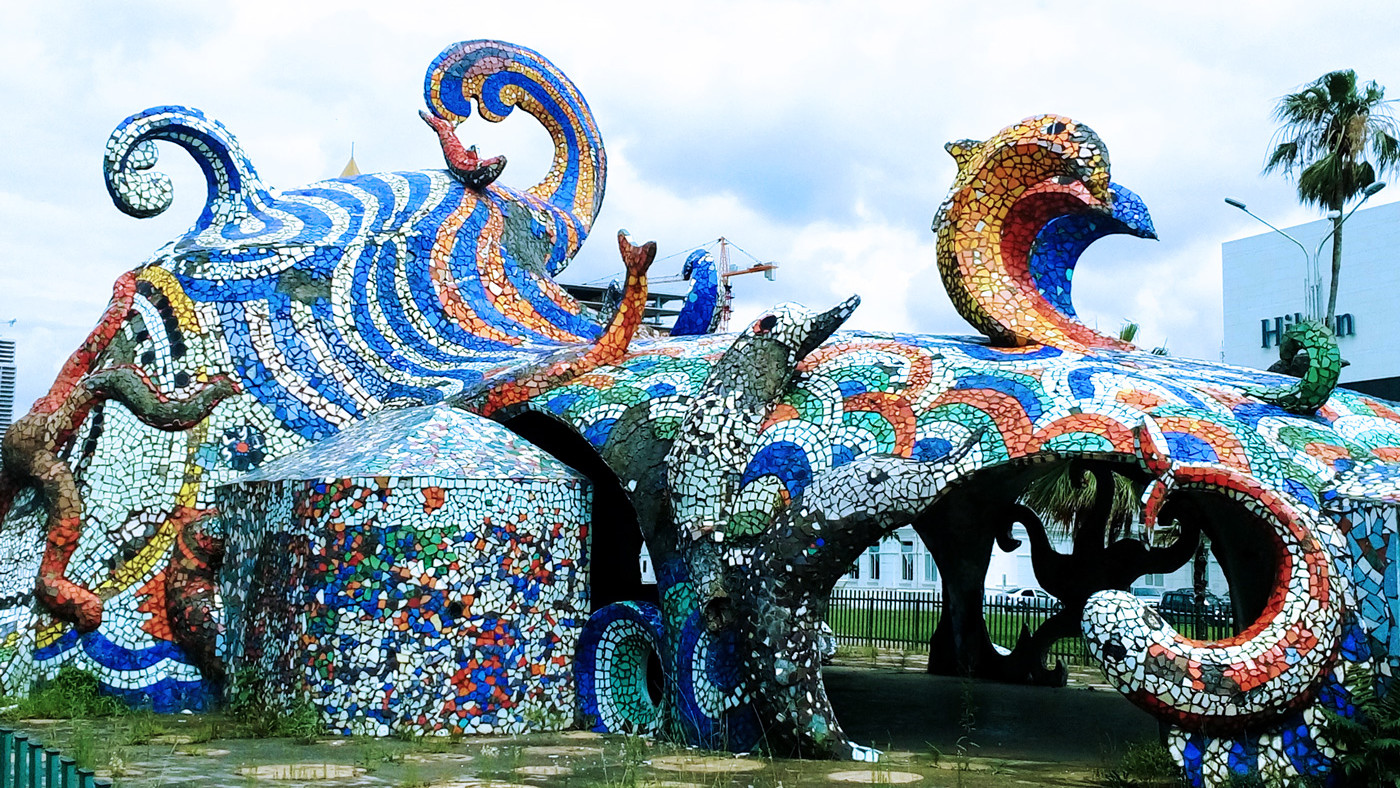 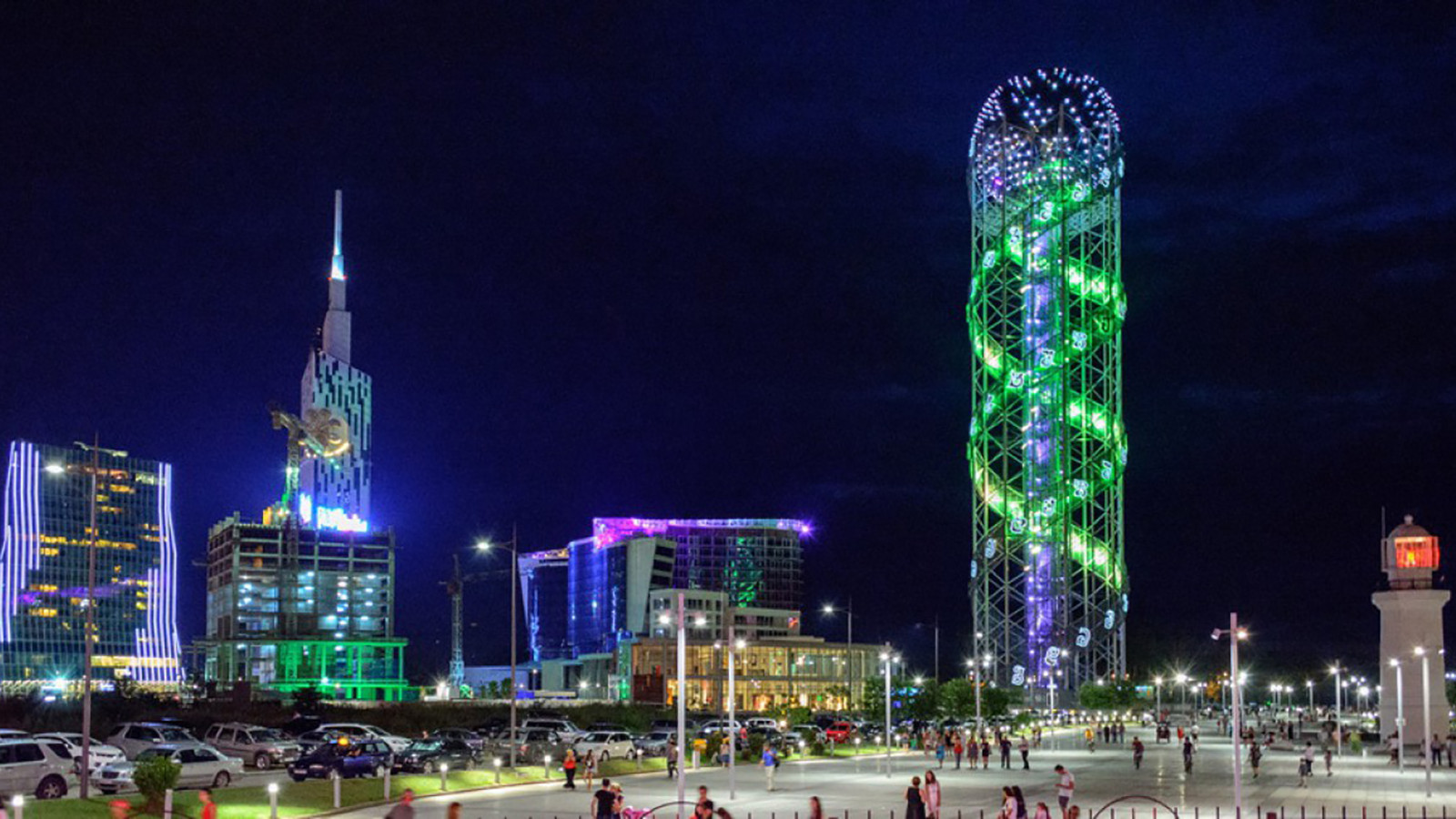 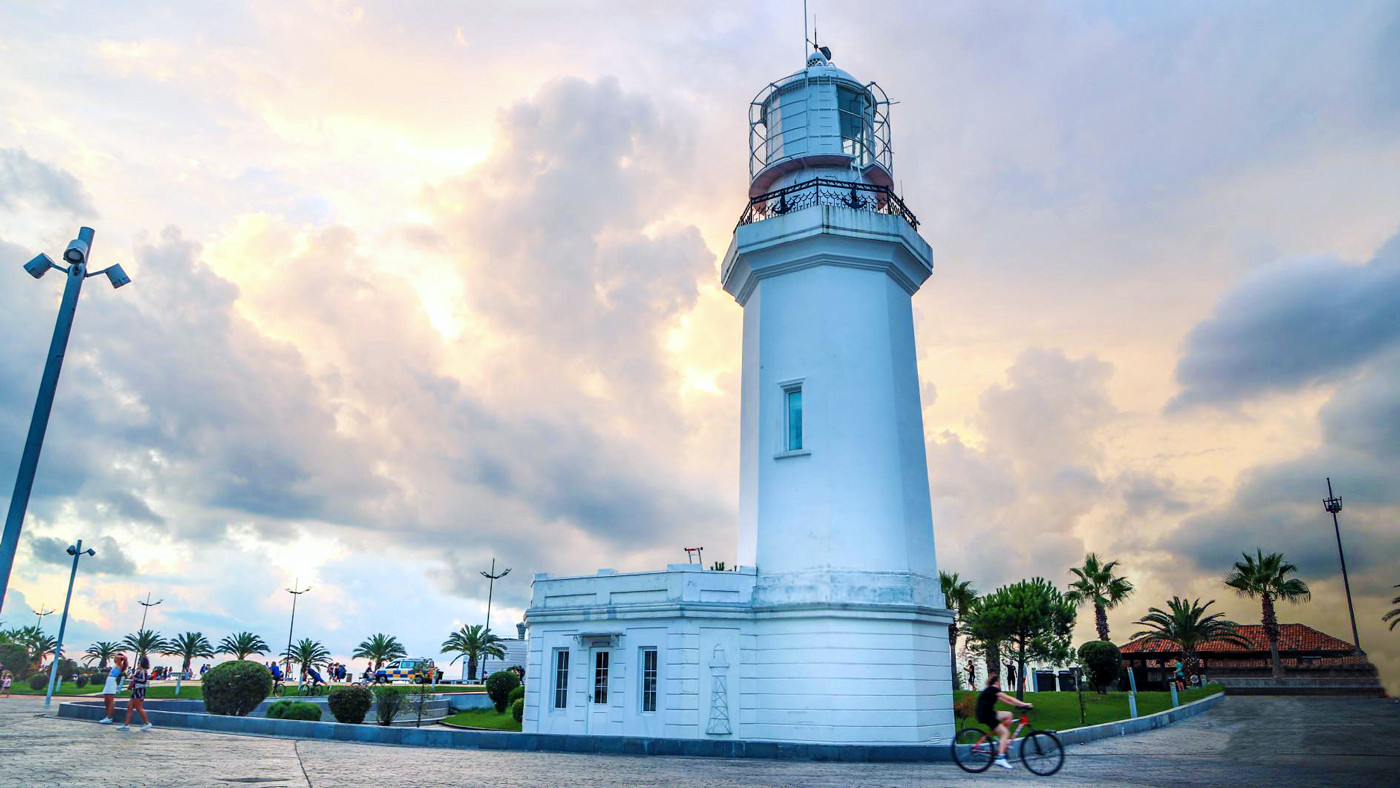 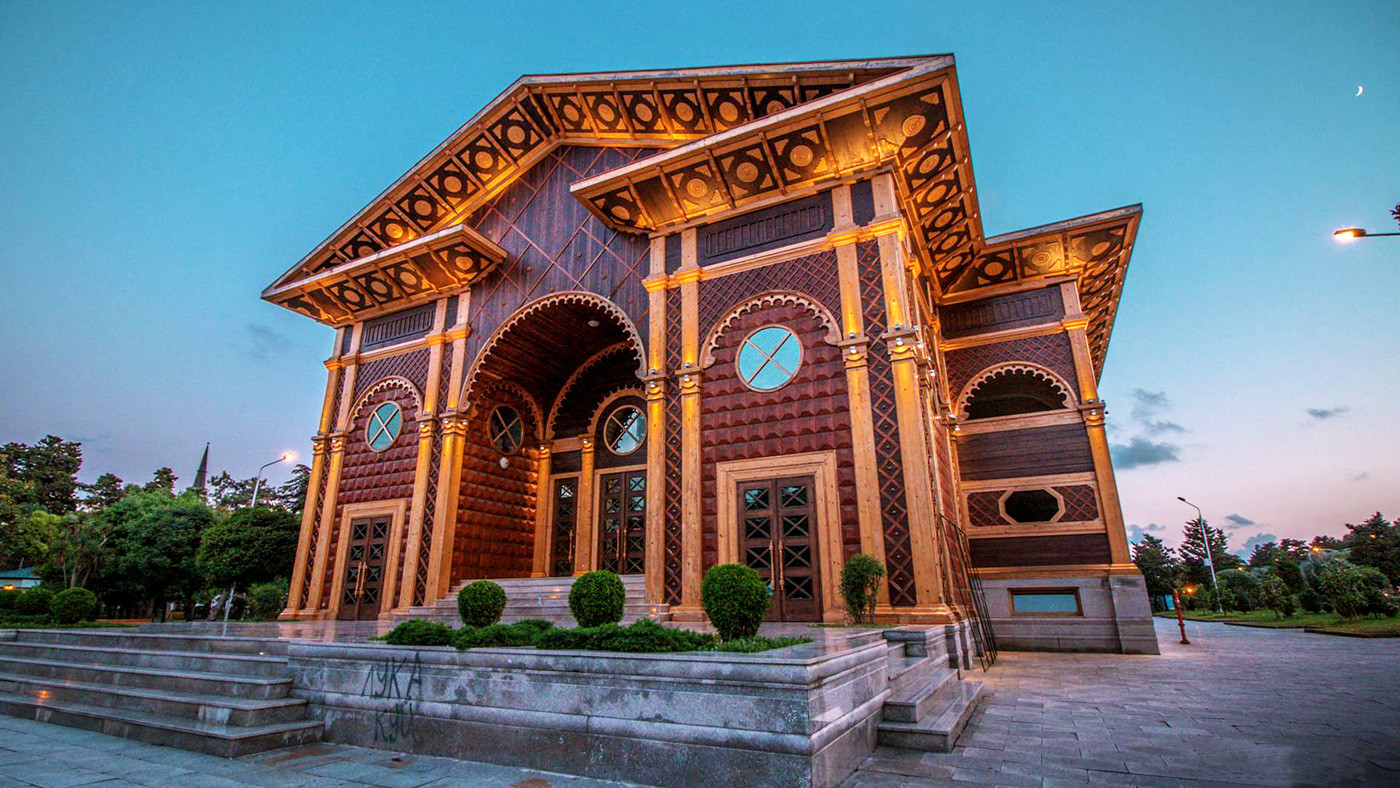 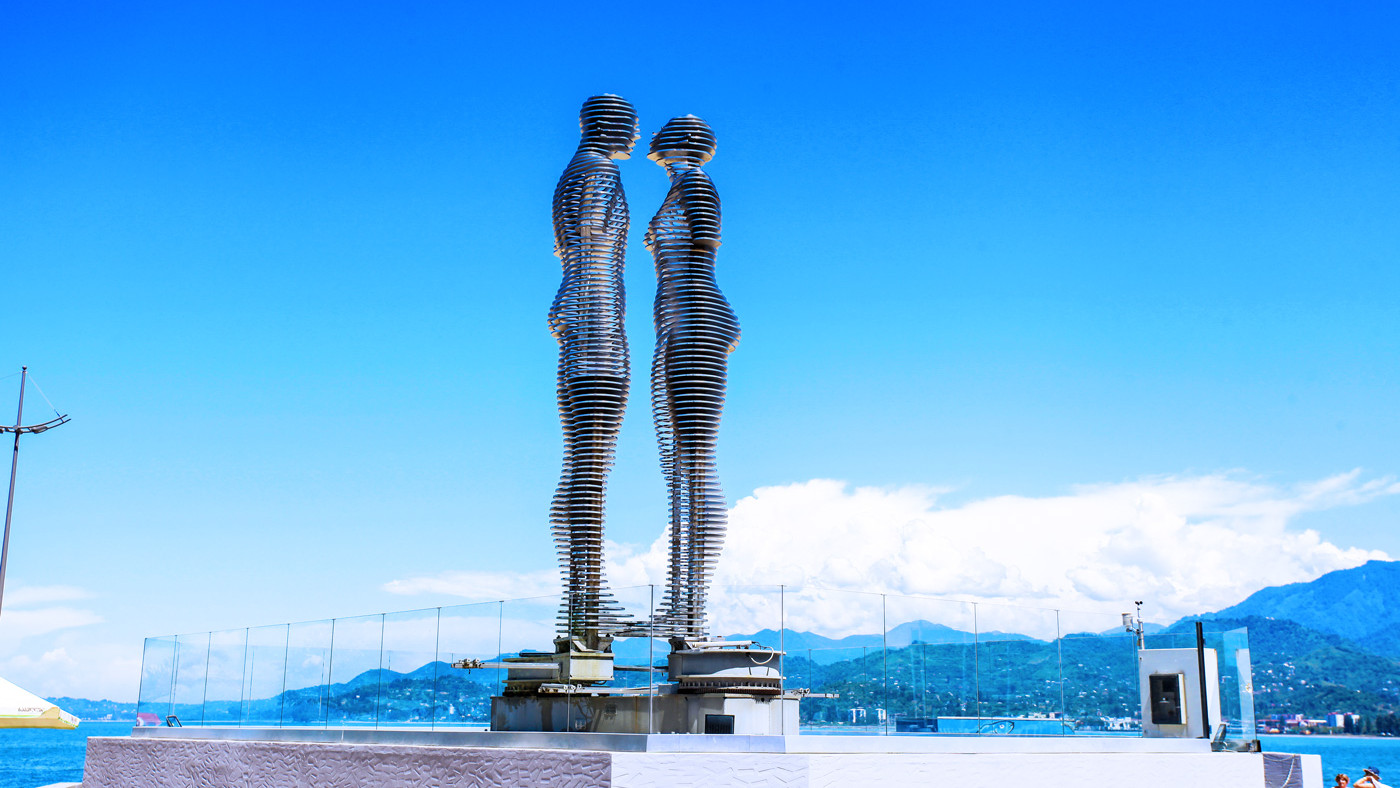 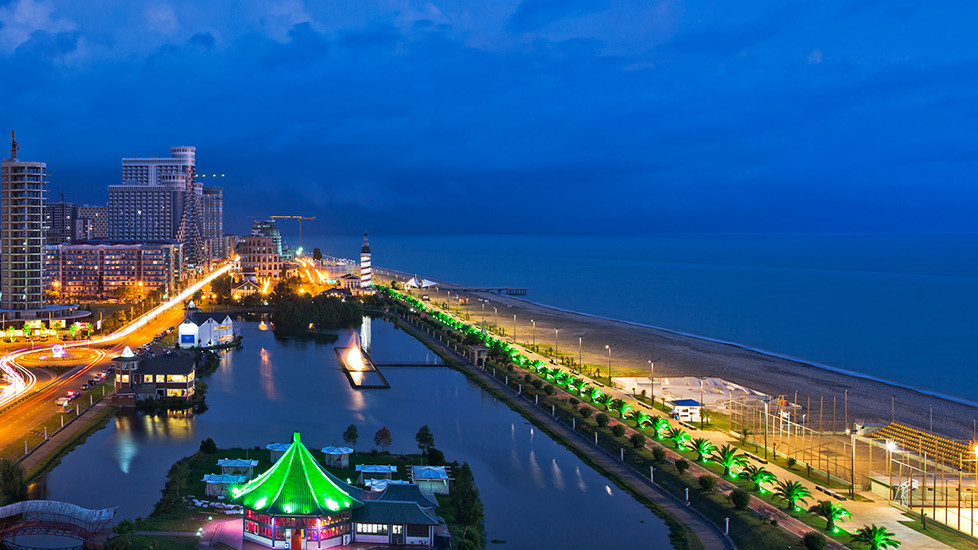 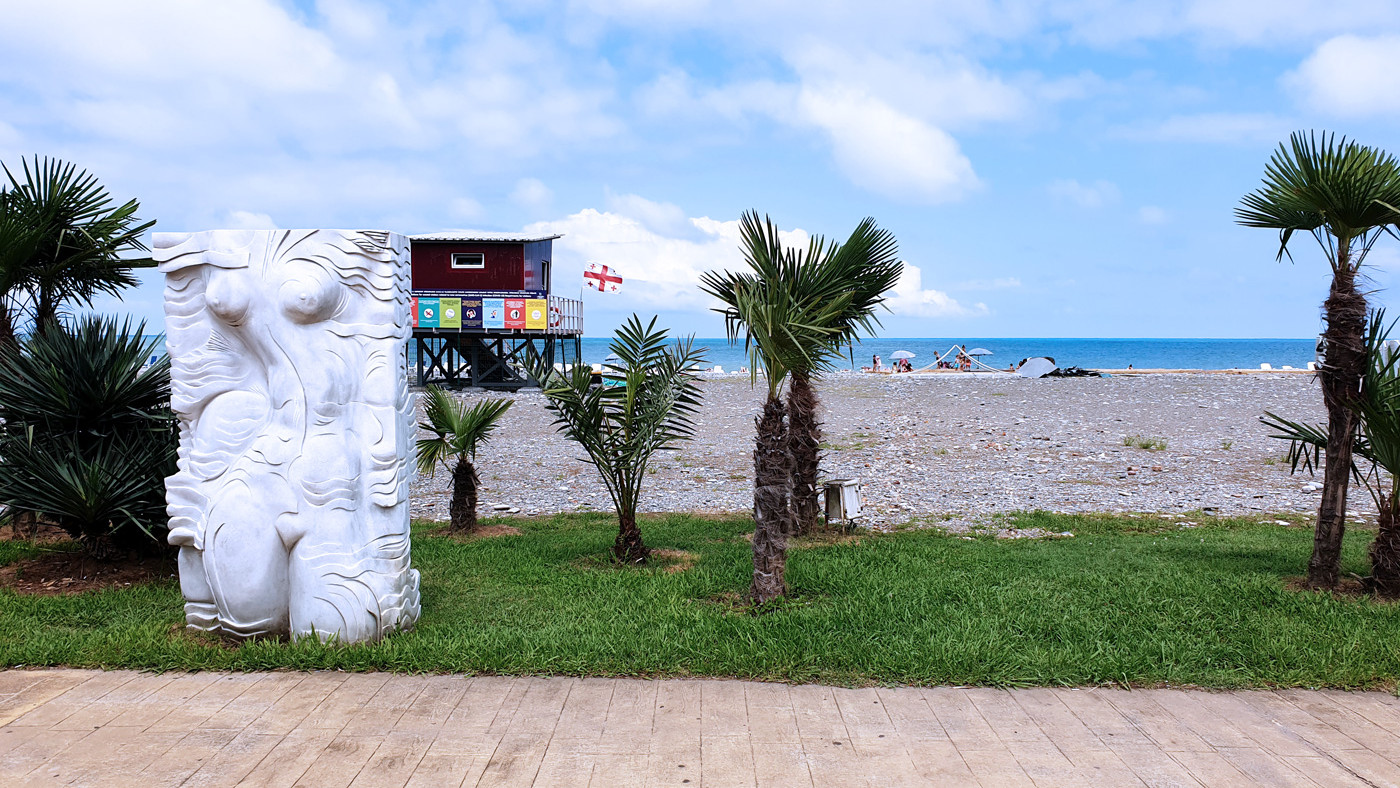 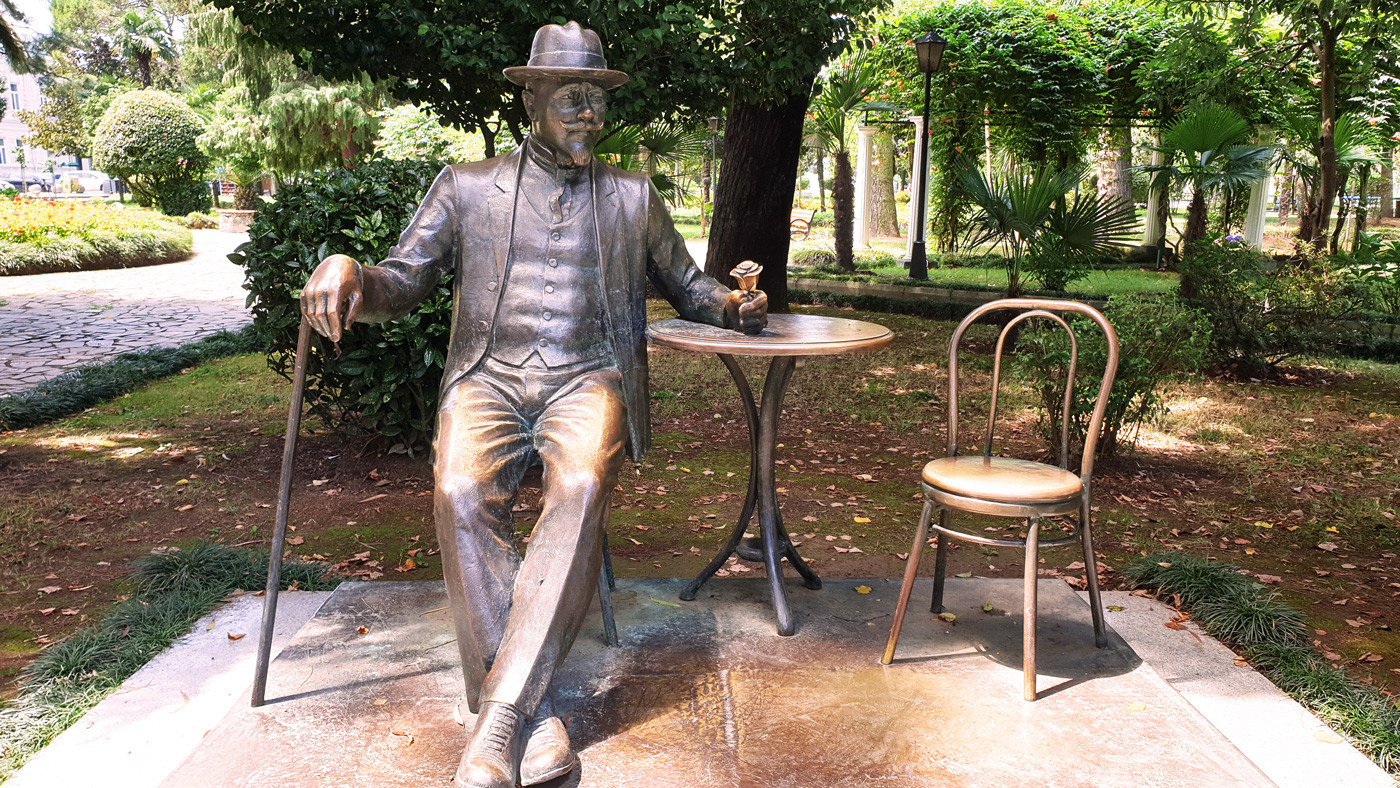 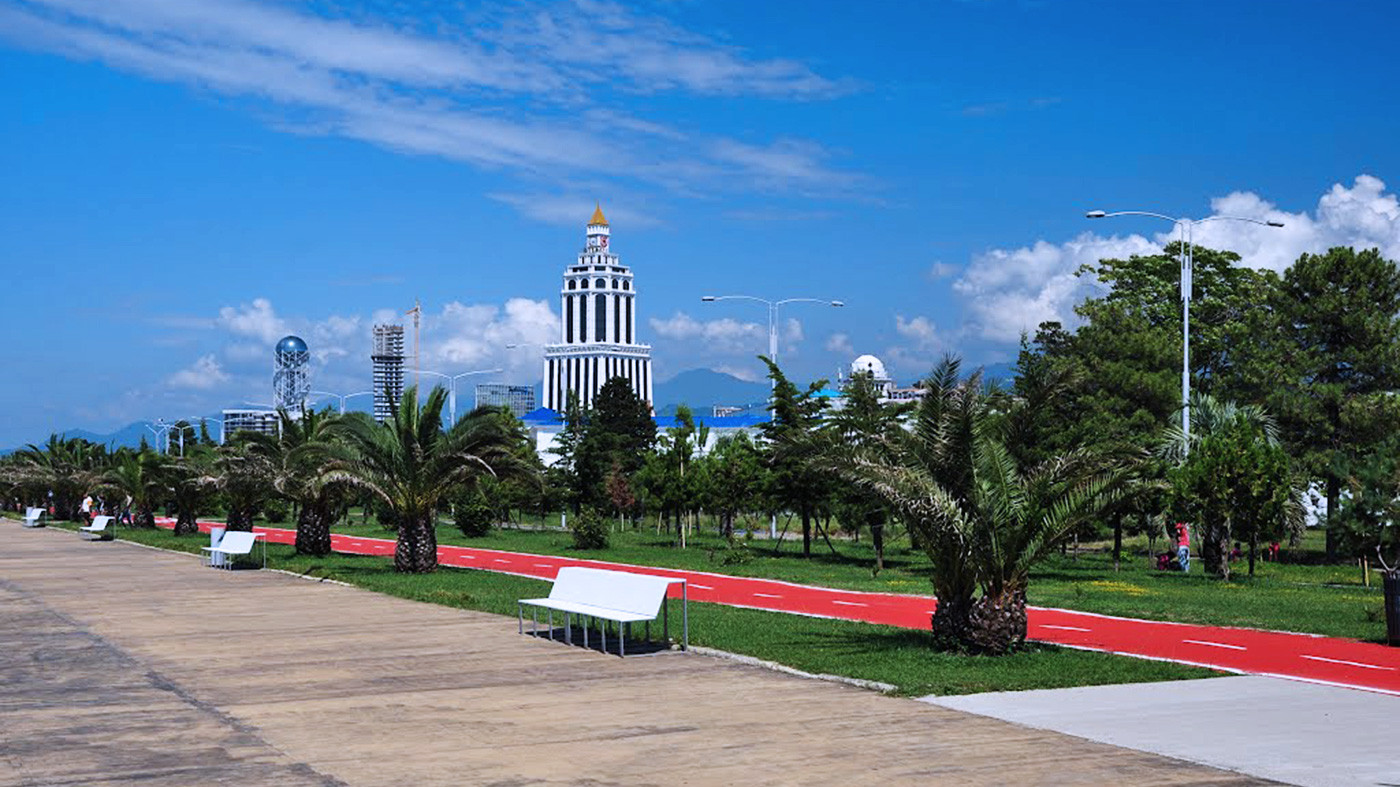 Construction of the boulevard began in 1881, when Mekalov-the Governor of Batumi District assigned German gardeners and landscape architects Rayer and Reseller to create a park along the seaside of Batumi Old Town. Two years later, Ressler passed away and development of the complex was handed to Michael D'alfons-a French architect, designer and nobleman. In 1885-1889 years D'alfons renovated the area in a French style and managed to transform it into a marvelous resting place. The first movement of horticulture in Batumi was connected with his name as well. D'alfons was a gardener who foresaw unique resources and potential of Batumi Black Sea coast and managed to use fertile soil adequately. Because of his unique vision and extensive knowledge the designer is often referred to as a "Genius of Batumi sea coast".

In 2012 the bronze sculpture of Michael D'alfons was installed in the boulevard, thus honoring his contribution to development of the boulevard and Batumi Botanical Garden.

In 2009 a Spanish architect Alberto Domingo Cabo constructed 1200 m modern addition for the boulevard, making it one of the most attractive tourist destinations. As a result, modernized coastal line reached 7 km length and was divided into ‘new’ and ‘old’ boulevards.

The unique recreation zone, which is also a cultural heritage monument, follows a seaside line that’s wooded in some places, open in others, and comprises restaurants, beach bars, café-lounges, bungalows, clubs, amusement rides for children, colorful dancing fountains, bike path, zoo-corner with more than 140 inhabitants and unique vegetation: more than 40 thousand tree-plants planted on the area, you will also find here many iconic architectural landmarks of Batumi :

Batumi's Lighthouse (1882) - situated in Miracle Park, at a unique spot, where 41 degree parallels of the longitude and the latitude coincide with each other. This innovative 21-meter stone building also functions as a hydrographic center, where weather forecasters observe weather condition for 24/7.

Alphabetic Tower (2012) - 130-meter high iron structure in the shape of the DNA strand, which symbolizes the uniqueness of the Georgian alphabet and people.

Batumi Colonnades (1930-1934) - two elegant white Greek-style columns, a circular one in the 6th of May Park, and a rectangular one on the Boulevard. They were built about 100 years ago and symbolized the entrance to the embankment.

Monuments of Ali and Nino (2010) - a kinetic sculptural composition by famous Georgian artist and sculptor Tamar Kvesitadze. 8-meter long almost translucent and made of steel figures of Ali and Nino, slowly moving towards each other, creating a single integral piece for a moment to be separated again. The process repeating every 10 minutes.

Summer Theater (1948-1949) -one of the most striking wooden building, constructed in Batumi without a single nail. The wooden facade features large round windows and cascading geometric patterns in alternating lighter and darker finishes with carved ornamentation. Inside, the ceiling over the orchestra is painted to mirror the sky.

Cafe Fantasy Octopus (1981) - octopus-shaped, Soviet-era café formally known as Cafe Fantasia is a truly magnificent sample of the mosaic art preserved until now in the city.

Historic Alleys: Alley of Magnolias and Alley of Palms – the idea of planting famous alleys emerged from its founding in 1881. In 1884, the first alley was planted along Ninoshvili Street, now called the Alley of Magnolias, stretched over a kilometer and boasting Magnolias of different sizes. For over three centuries, Magnolias have been the visitors with its mind-blowing scent.

The development of a Palm Alley plan started in 2003 and was finalized in 2006. The subtropical ever-green palm alley stretches along the coastline for over 4.7 kilometers.

Lady with a dog on a bicycle by Georgian sculptor Irakli Zhvania – a kinetic statue of a woman with a dog above a picturesque fountain was installed in 2012. Wheels are spinning thanks to water cannons, creating an illusion of a girl riding Penny Farthing bicycle on the water.

With the growth of tourism, a lot of modern hotels, apartments, and other buildings have appeared along the seashore. All along the Boulevard, you’ll encounter cute cafés, carts selling refreshments, jewelry, local crafts. Stop to enjoy the Ferris wheel and the famous dancing-light fountains.

By day or by night it’s always a great idea to stroll along the shore. The beach is spotless and not too crowded. There are many benches along the boulevard, from where you can watch great sunset views and create unforgettable memories on your Holiday.

Book Batumi private walking tour with us or contact us here.

Check below the detailed itineraries available to book from Batumi: