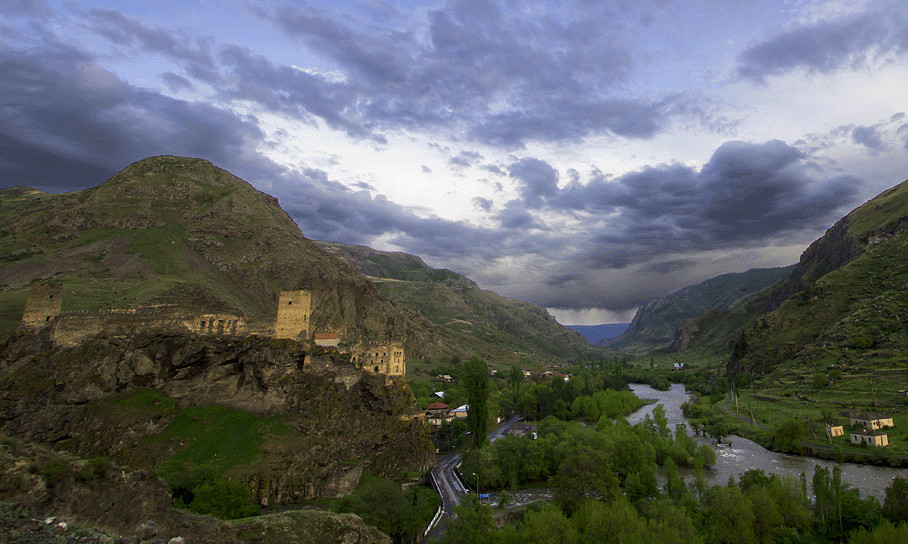 Vardzia-Khertvisi, comprising a vast territory in the upper reaches of the river Mtkvari basin, and spread over 18 km from Khertvisi (Medieval residence) to Vardzia (12th-13th cc. rock-cut monastery) is significant in many respects: unique natural conditions contributing to the specific microclimate and landscape, historical context and diversity of cultural heritage.

Rock-cut complexes forms integrate part of the landscape. Rock-cut structures of the nominated site have preserved interiors and planning type, which have not reached us in the samples of built architecture. This is especially vivid in the samples of vernacular architecture, monk cells, subsidiary and public structures. Rock-cut monuments preserved in Vardzia-Khertvisi gorge comprise quite vast chronological limits - from the 8th-9th cc. up to 15th-16th cc. They make it possible to trace the development of the type from simple caves up to grand, multi-tiered complexes. This gorge has preserved rock-cut villages with the unique samples of dwellings, minor and great monastic complexes, with the masterpieces of the medieval mural painting, as well as epigraphic monuments containing important historical records.

Fortification structures of the site are erected in strategically important places. At the same time, aesthetic aspects are also taken into consideration, being reflected in the ingenuous merging with the setting. This interconnection is harmonious to such an extent that local landscape is hardly imaginable without these structures.

Murals preserved in the site are not numerous, but have crucial significance in the development of the Medieval Georgian mural painting. They range from the earlier period (10th c.), when a tradition of complete church decoration was not yet fully established in Georgia, up to Late Middle Ages (16th c.). Of special significance are the murals in the main church of Vardzia rock-cut monastic complex (12th c.), containing portraits of the Georgian royal family. This epoch marks a heyday of the Medieval Georgian mural painting, being reflected in the highest development of the national artistic traditions and clear cut originality of its brightest samples, which greatly differ from the contemporary Byzantine monuments.

Archaeological excavations provide evidence on dense habitation of this area beginning from the Eneolythic epoch. Burial-mounds unearthed here (17th-16th cc. BC) confirm existence of the local centre of Trialeti culture. They show that at that period the gorge was inhabited by separate families united in tribal organizations.

This area is rich in the epigraphic monuments - building and memorial inscriptions, executed in old Georgian uncial script ‘Asomtavruli’, which represent an important historical source. Vast chronological range of these monuments show development of the letter outlines from the 9th c. up to 18th c. Of special interest are painted inscriptions and inscriptions written in ink.

Among the monuments preserved in the site, distinguished are tetrahedral stone stelae erected in the open air (Zeda Tmogvi, Pia, etc.). Tradition of erecting such stelae in Georgia goes back to the period of Christianization of the country (4th c.). These monuments are decorated with ornamentation, symbolic and figure representations. Chronological range of these interesting samples of the Medieval Georgian art covers 6th-9th cc.

Vardzia-Khertvisi area has preserved both churches of high artistic value and ordinary modest chapels. These are mainly domeless structures. Special mention should be made of the two aisled churches type samples of which are also preserved here (Zeda Vardzia 11th c.). It should be noted that development of this architectural type wide spread in Georgia could be traceable on the example of Georgian samples only. Ordinary chapels are characterized quite high building mastery and interesting artistic solution. They belong to the local so called ‘Javakhetian’ architectural school.

Landscape of the nominated area is a distinguished monument of nature and human activity. Villages and their arable lands located in the deep canyon of the gorge are situated on the terraces following topography of the gorge. Fortresses and churches erected on high mountains and hills are perceived as distinguished vertical accents in such a horizontally developed setting. They terminate and emphasize natural verticals, being in perfect harmony with the latter. They introduce great emotional impulse imparting specific grandeur to the whole environment. The same artistic affect is created by rock-cut monasteries and villages arranged in several tiers on high rocky mountain slopes.