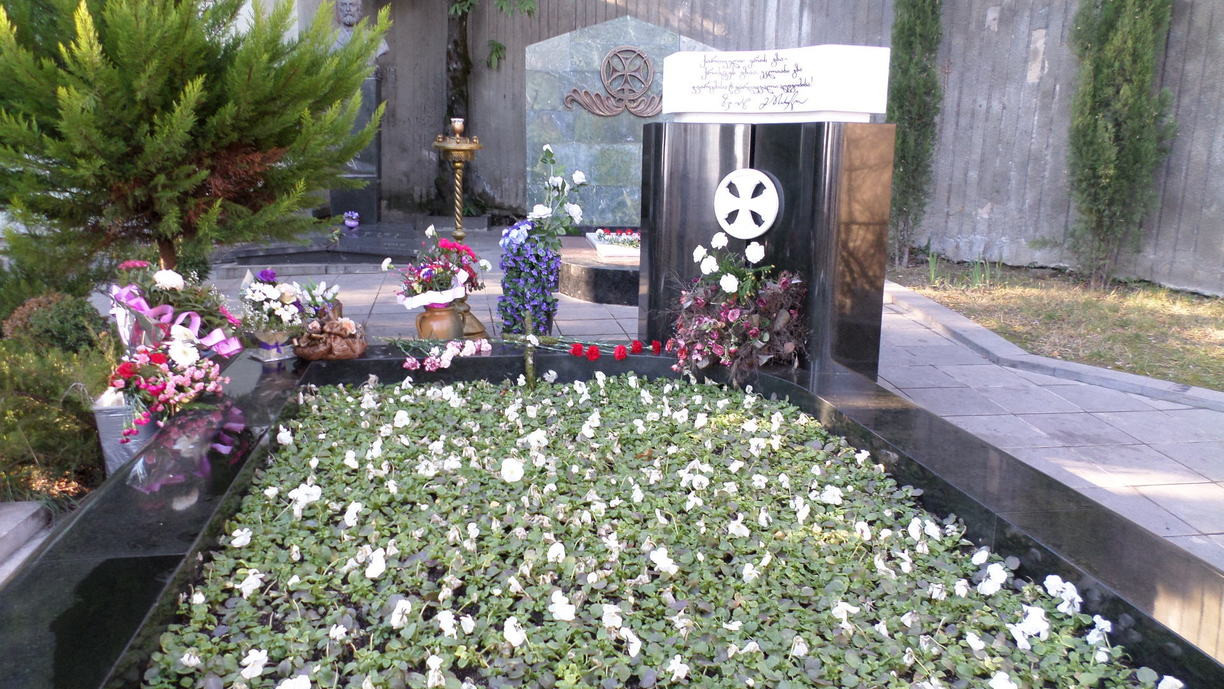 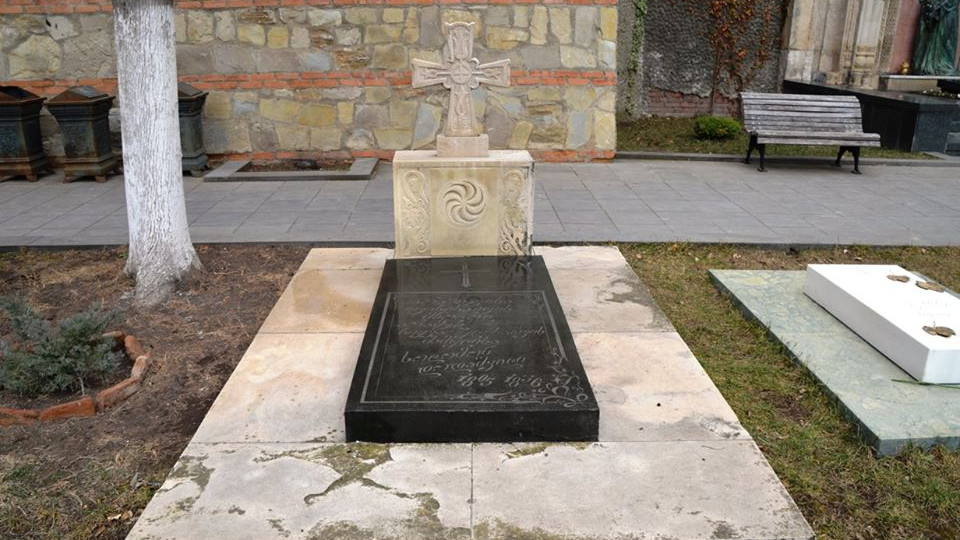 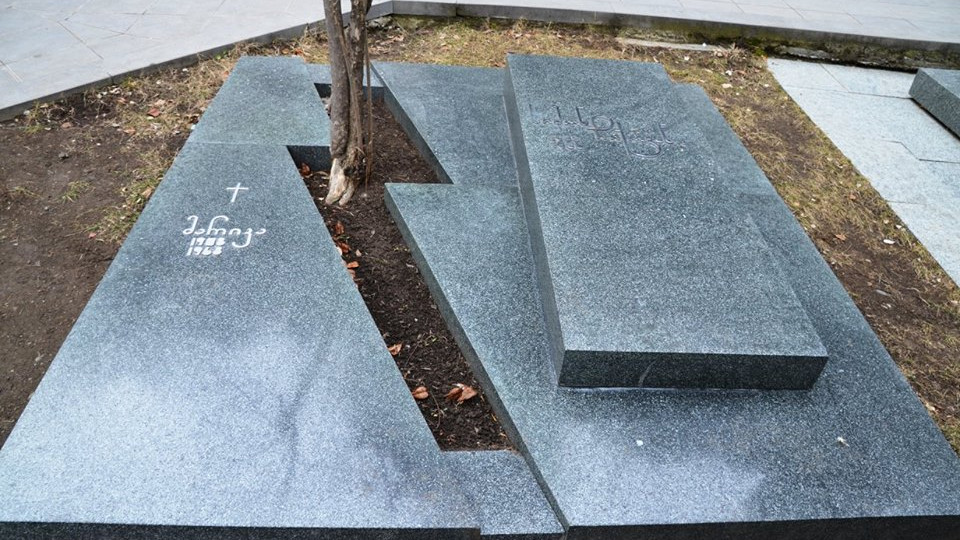 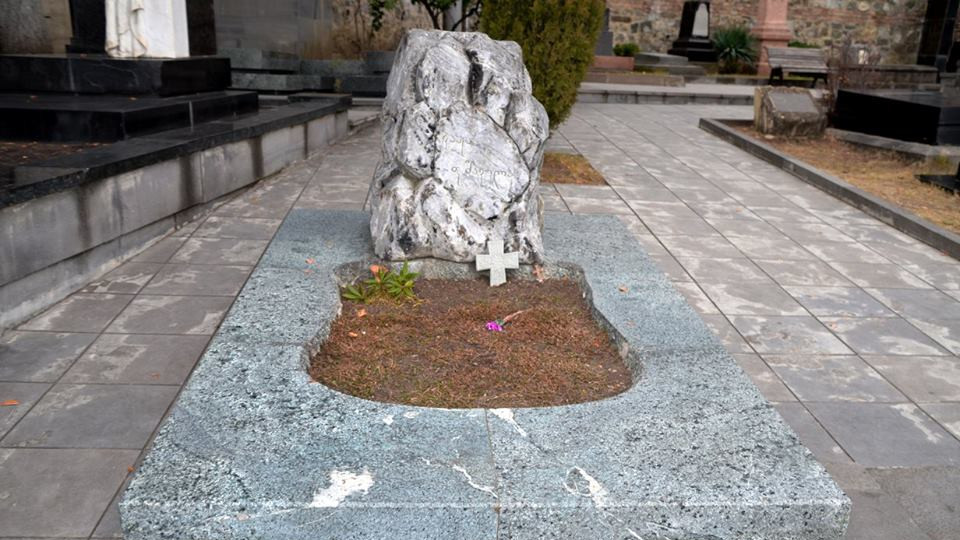 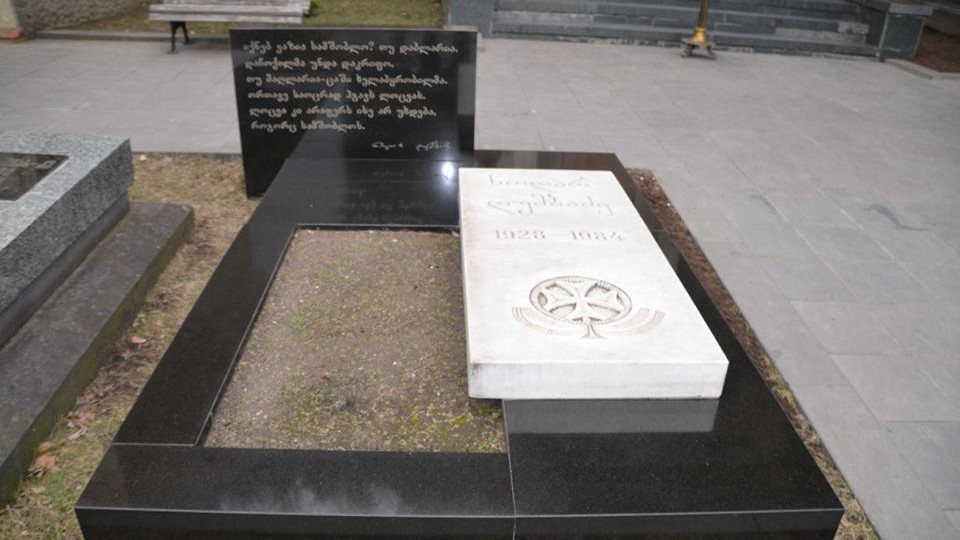 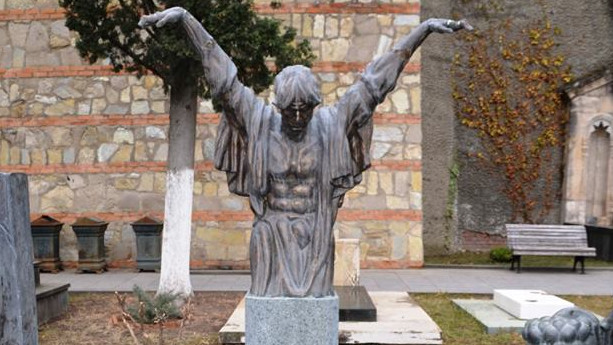 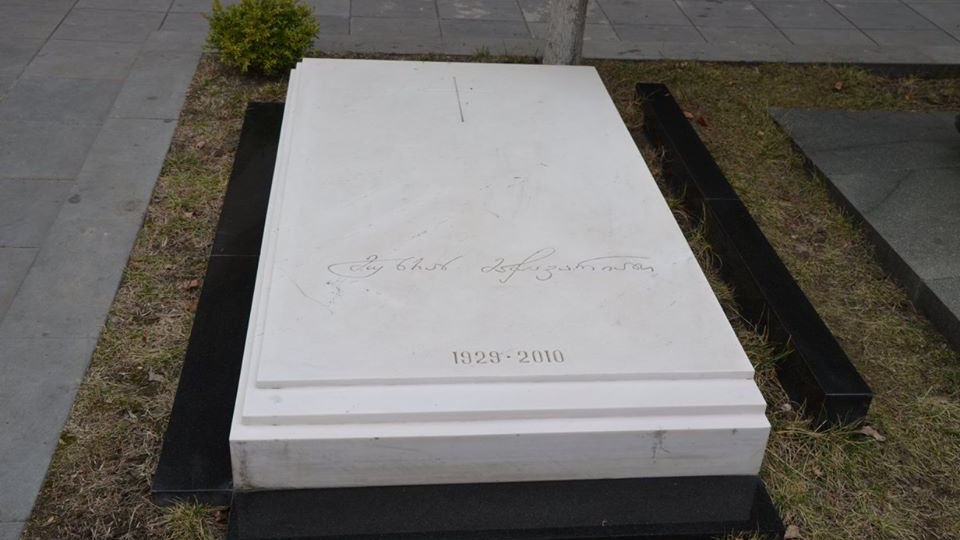 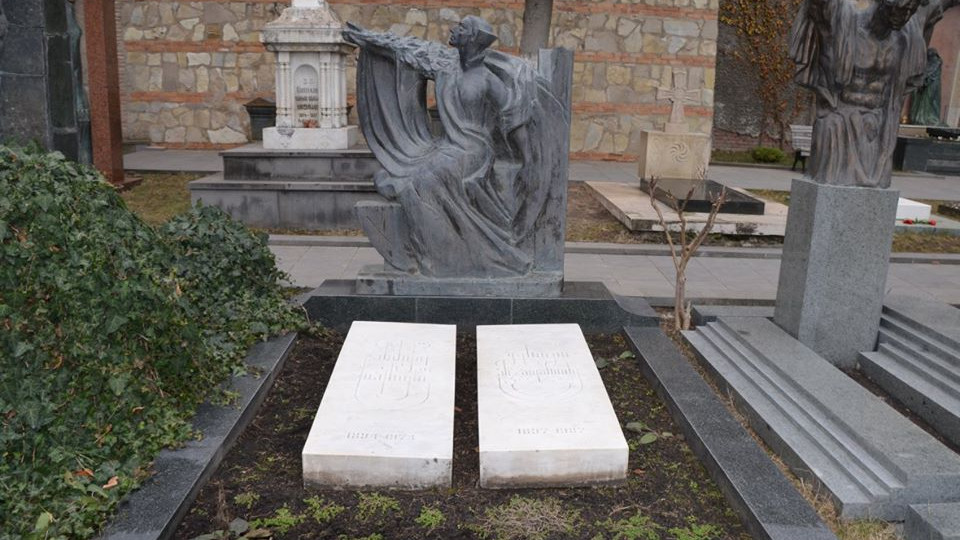 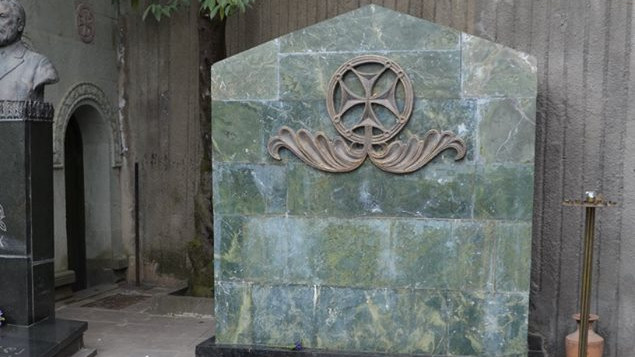 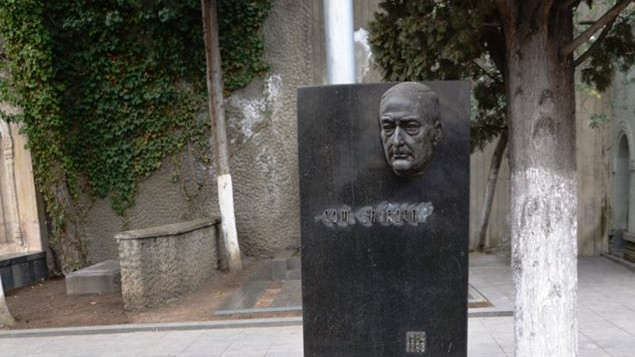 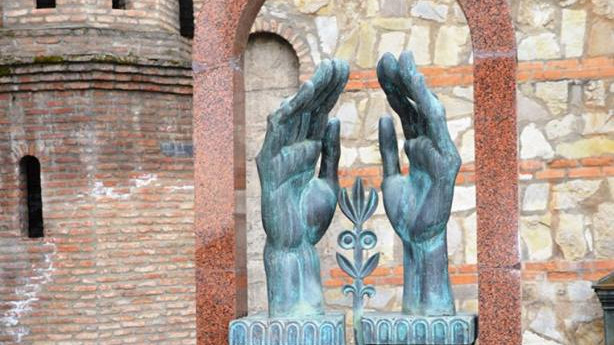 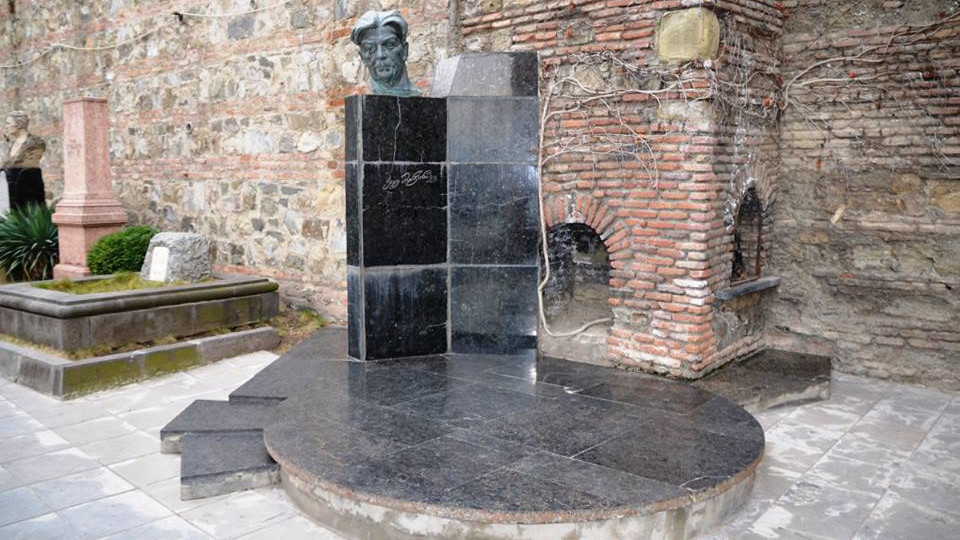 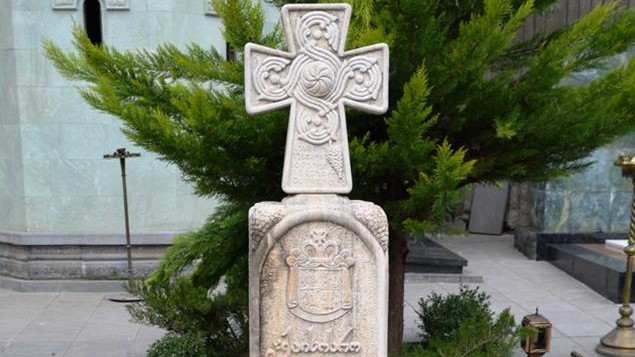 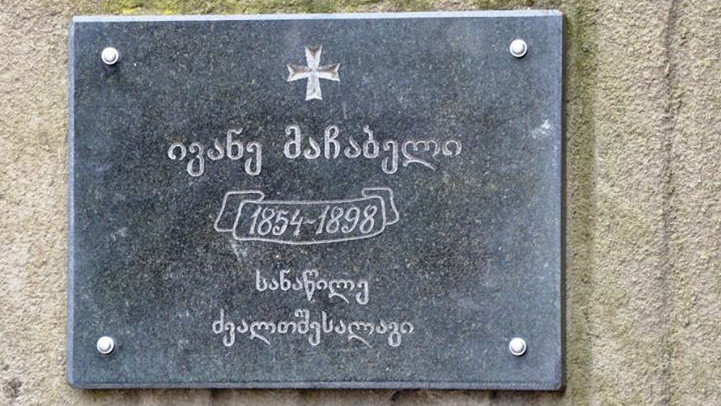 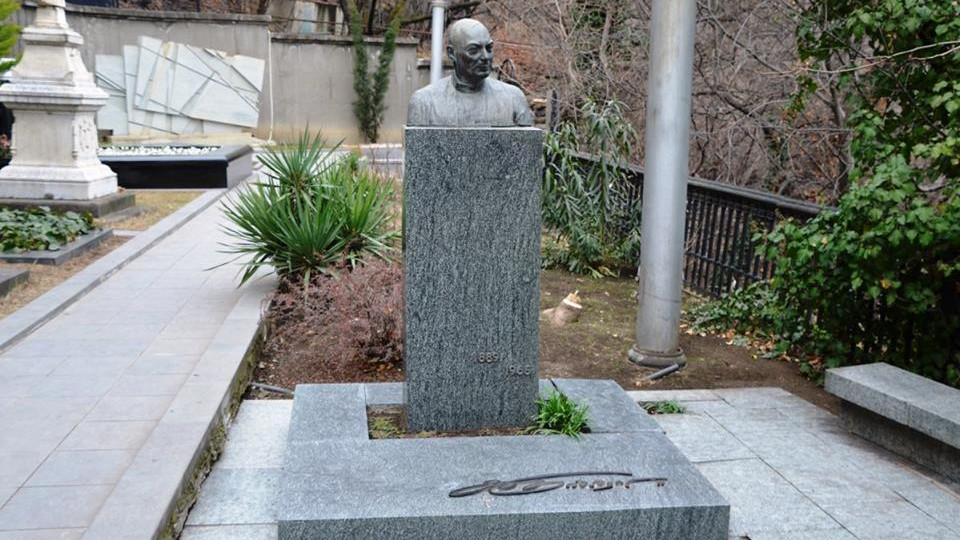 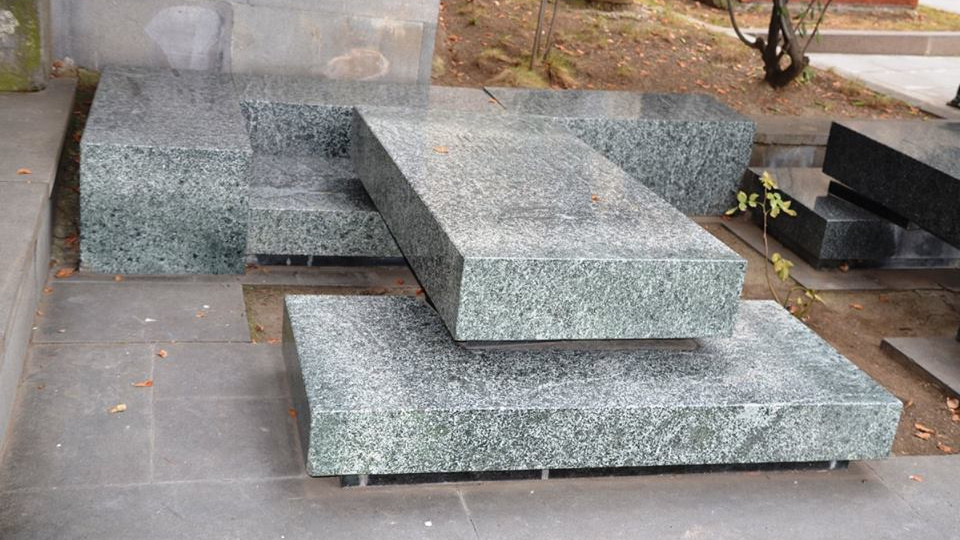 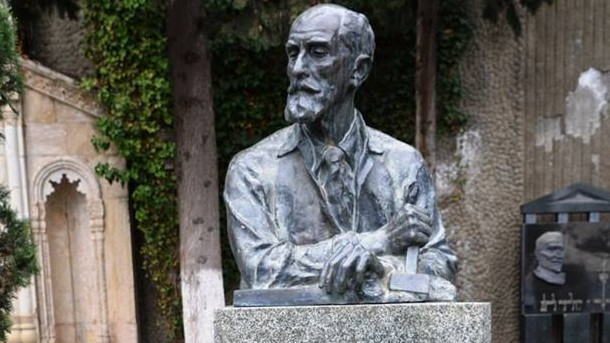 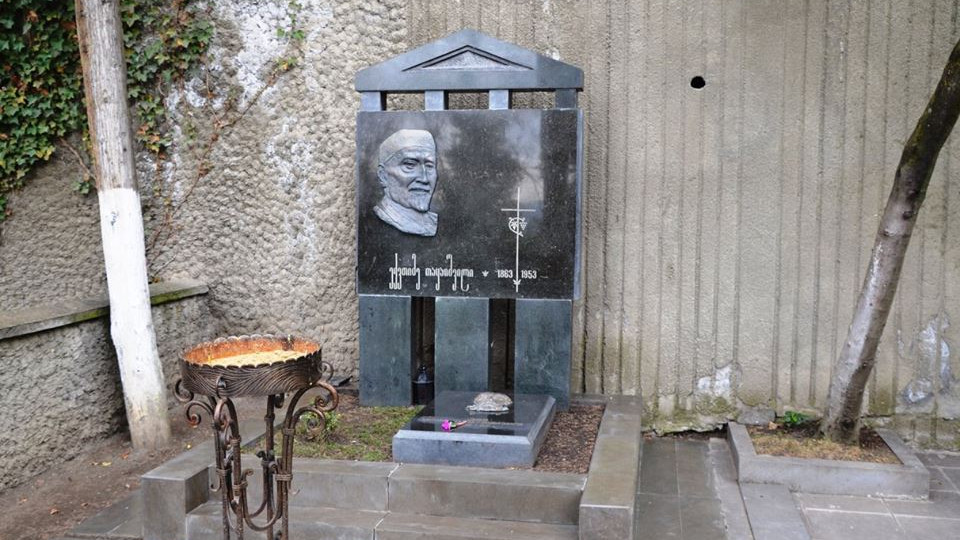 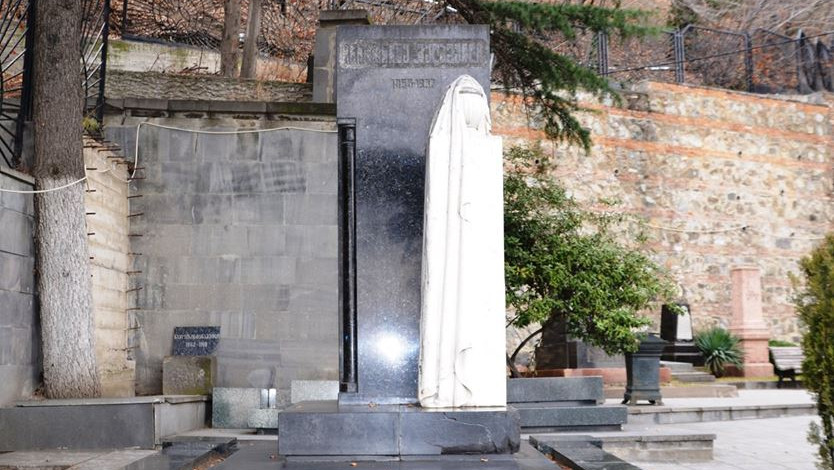 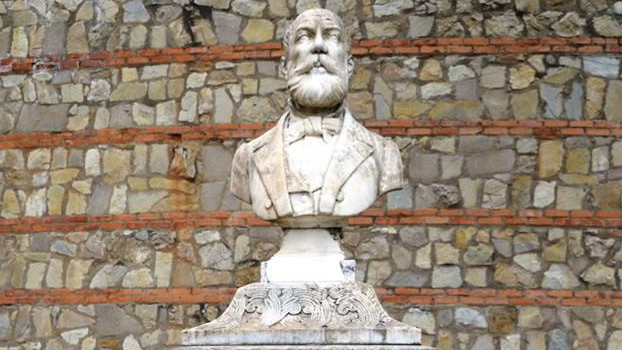 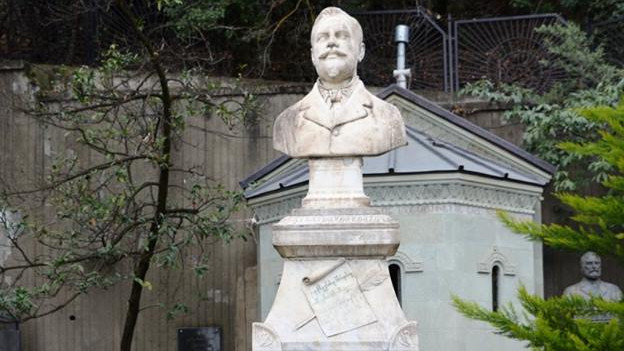 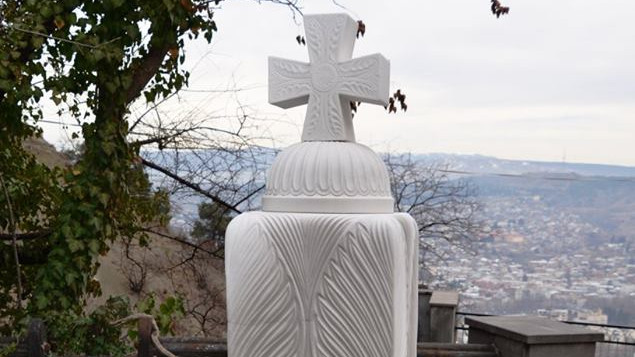 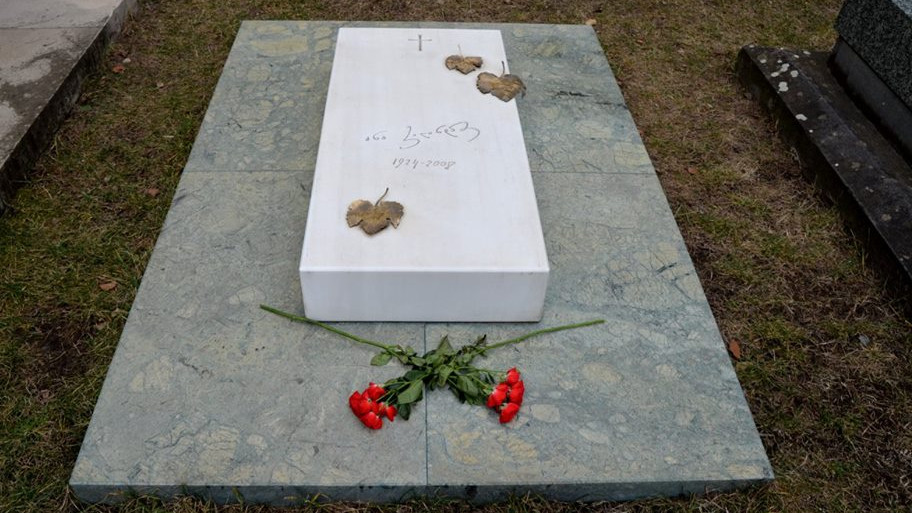 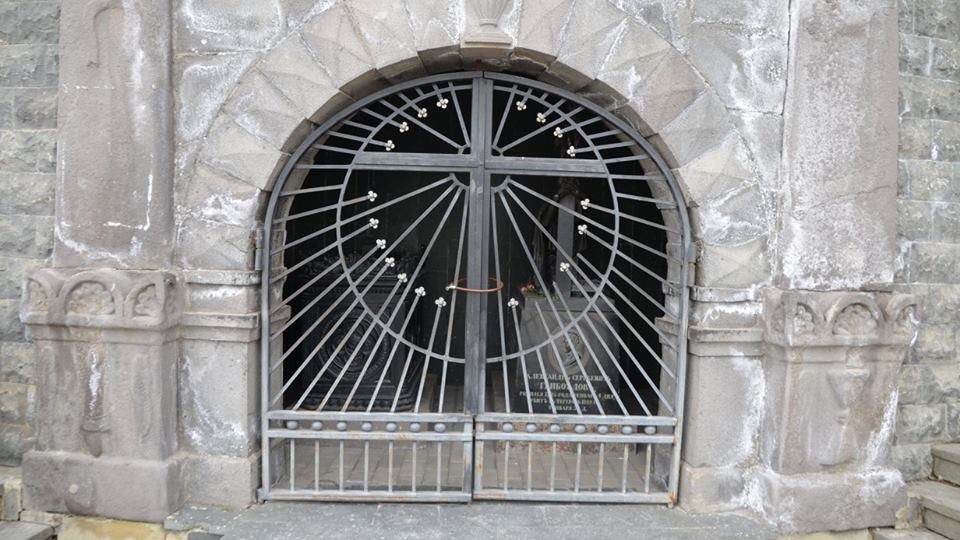 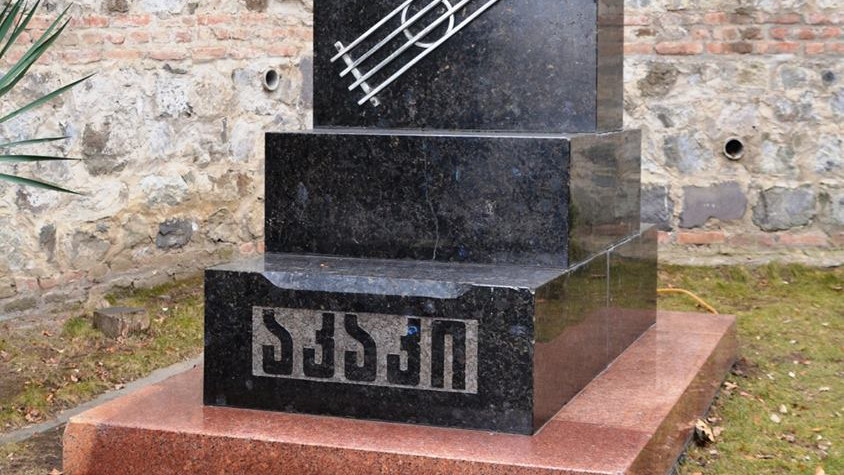 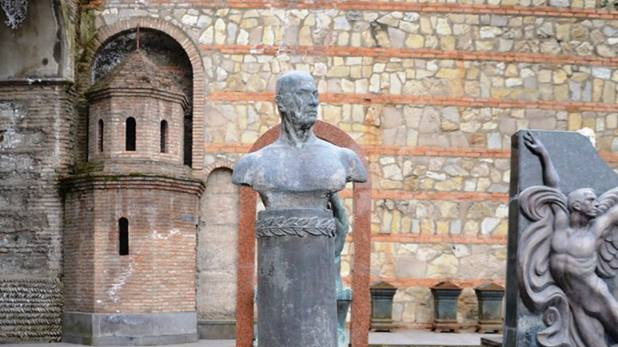 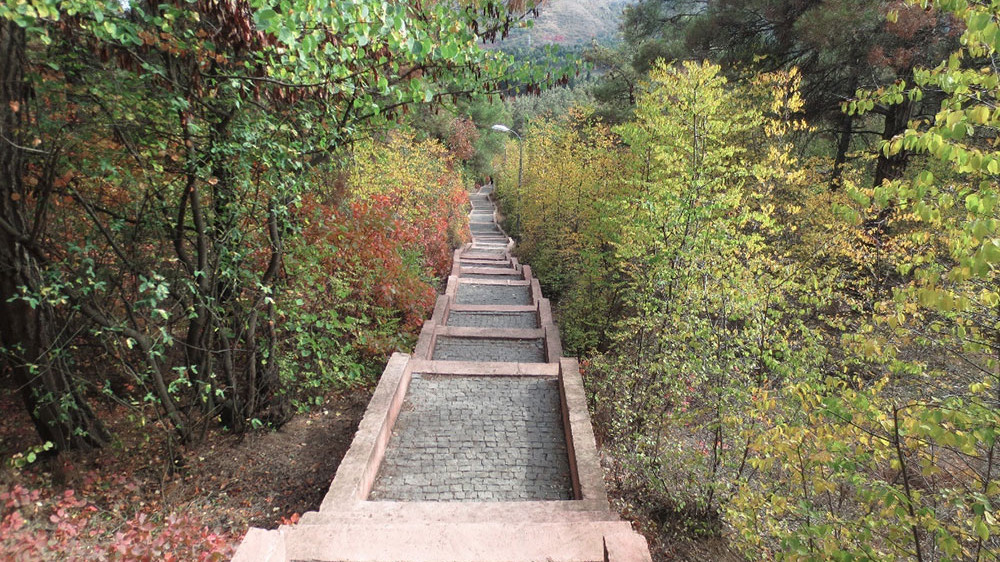 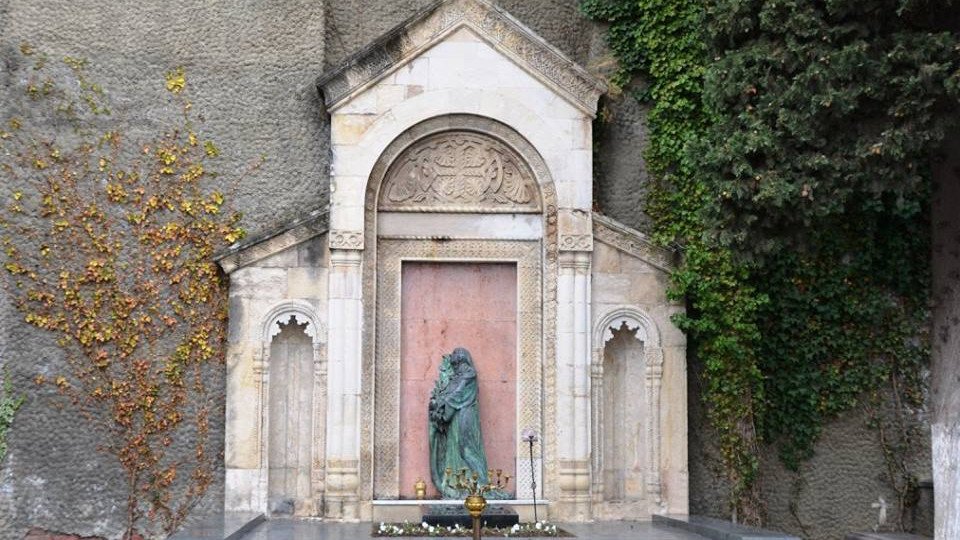 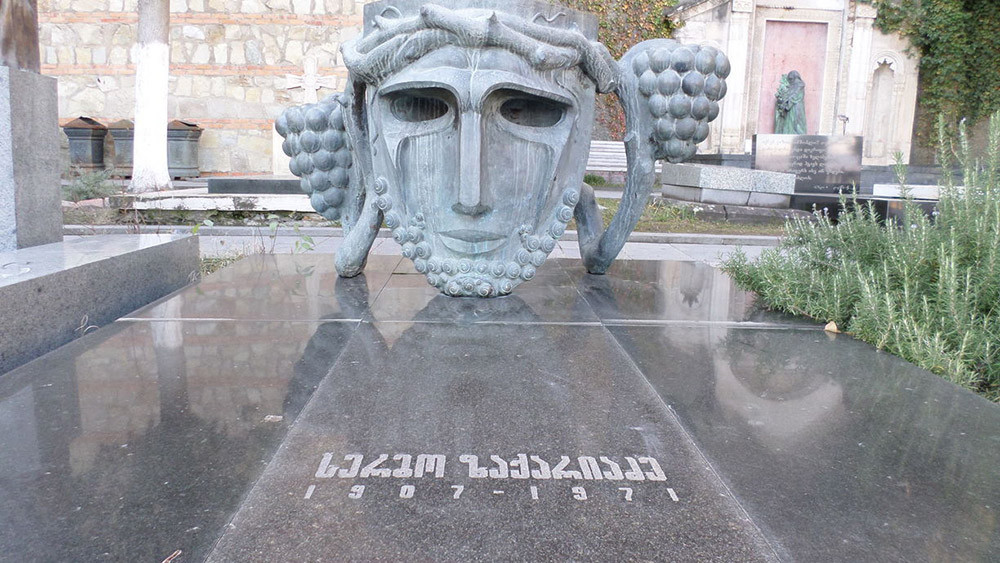 Mamadaviti or Mtatsminda Pantheon is a necropolis of Georgian Writers and Public Figures. Situated in the middle level of Holy Mountain Mtatsminda, it is nested in the volcanic rocks. Pantheon overlooks the city Tbilisi.

The Pantheon was established in the yard of St. David’s Church Mamadaviti. This is a place where the monk David – the holy father - settled in 6th c. Necropolis developed in 19th-20th cc - famous artists, writers, heroes, scholars are buried.

The Russian writer Alexander Griboyedov and his wife Princes Nino Chavchavadze (the daughter of prominent Georgian poet Alexander Chavchavadze) were the first people to be buried there. The opening of the pantheon was related to the celebration of a century of Griboyedov’s death in 1929.

Nowadays almost 55 tombs of writers and poets, public figures and sculptors are buried in this territory.

The visitors can get here by the funicular tram, also walk from the parking plot.

Ekvtime Takaishvili - was a Georgian historian, archaeologist and public benefactor (1862 –1953).

Iakob Nikoladze - Georgian sculptor, People's Artist of the Georgian SSR, one of the founders of the Tbilisi Academy of Arts and its first professor (1876 - 1951).

Professor Ilya Vekua - Georgian mathematician, the Hero of Socialist Labour, the first rector of Novosibirsk State University, and president (1972–1977) of the Georgian Academy of Sciences (1907 – 1977).

Nobleman Kaikhosro "Kakutsa" Cholokashvili -(1888 –1930) -Georgian military officer and a commander of an anti-Soviet guerrilla movement in Georgia, A national hero.

Kote Marjanishvili - Georgian theater director, an important contributor to the pre- and post-revolutionary evolution of Georgian, Russian and Soviet stages. famous for his lavish and massive theater shows (1872 –1933).

Merab Kostava - (1939 – 1989)- musician and poet; one of the leaders of the National-Liberation movement in Georgia.

Veriko Anjaparidze - Georgian stage and cinema actress People's Artist of the USSR and a Hero of Socialist Labour (1897 – 1987).

Nodar Dumbadze - Georgian writer and screenwriter, member of the Board of the Writers' Union of the USSR (1928 - 1984)

Olga Guramishvili-Nikoladze - Georgian biologist and educator, founded a girls' school, and later a women's gymnasium, in Didi Jikhaishi. the chair of the school board in Poti (1855 –1940).

Simon ChikoVani - Georgian poet, the leader of Georgian Futurist movement, he ended up as a Soviet establishment figure (1902 –1966)

Zviad Gamsakhurdia - Georgian politician, scholar, and writer who became the first democratically elected President of Georgia in the post-Soviet era (1939 –1993)

Vasil Barnov - Barnaveli - Georgian writer, teacher and public figure, one of the founders of the Georgian historical novel (1856 -1934)