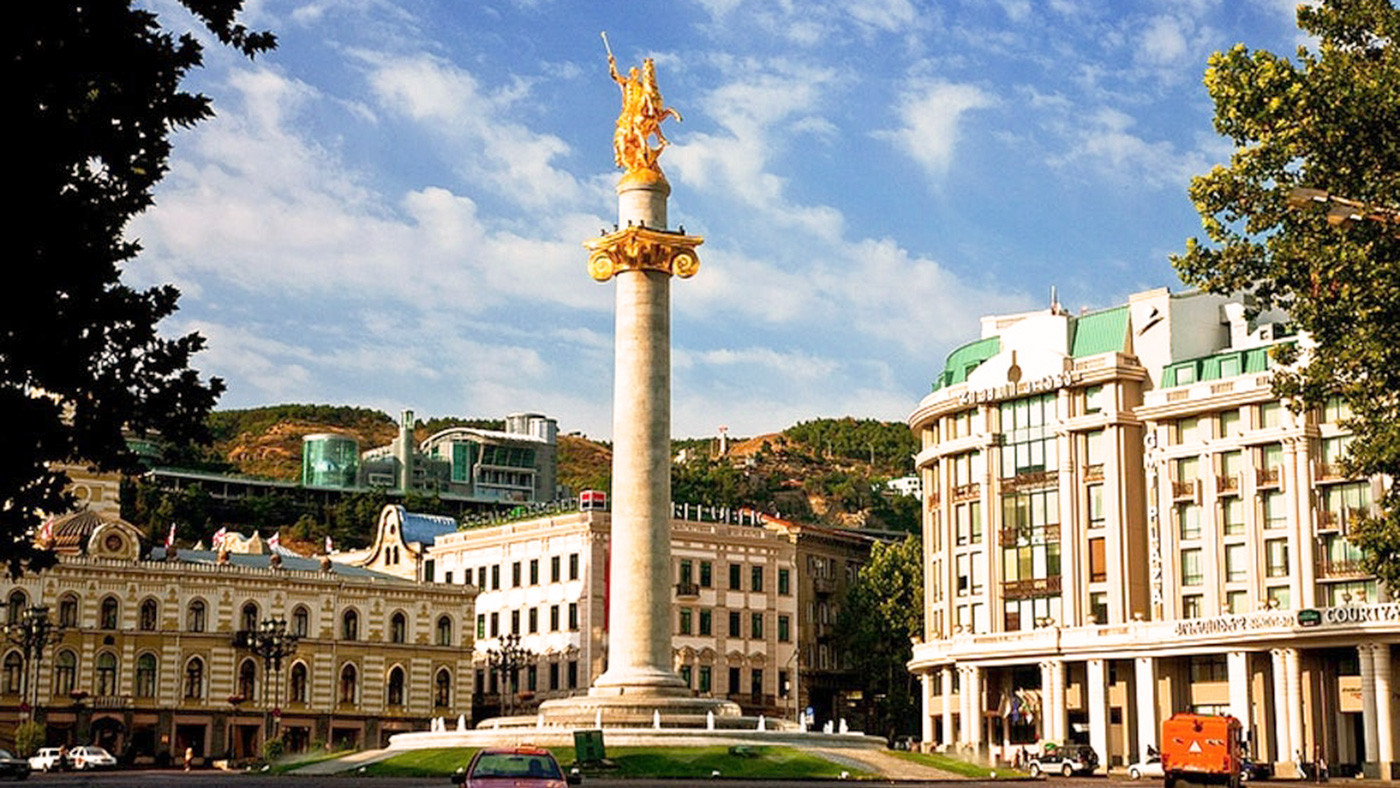 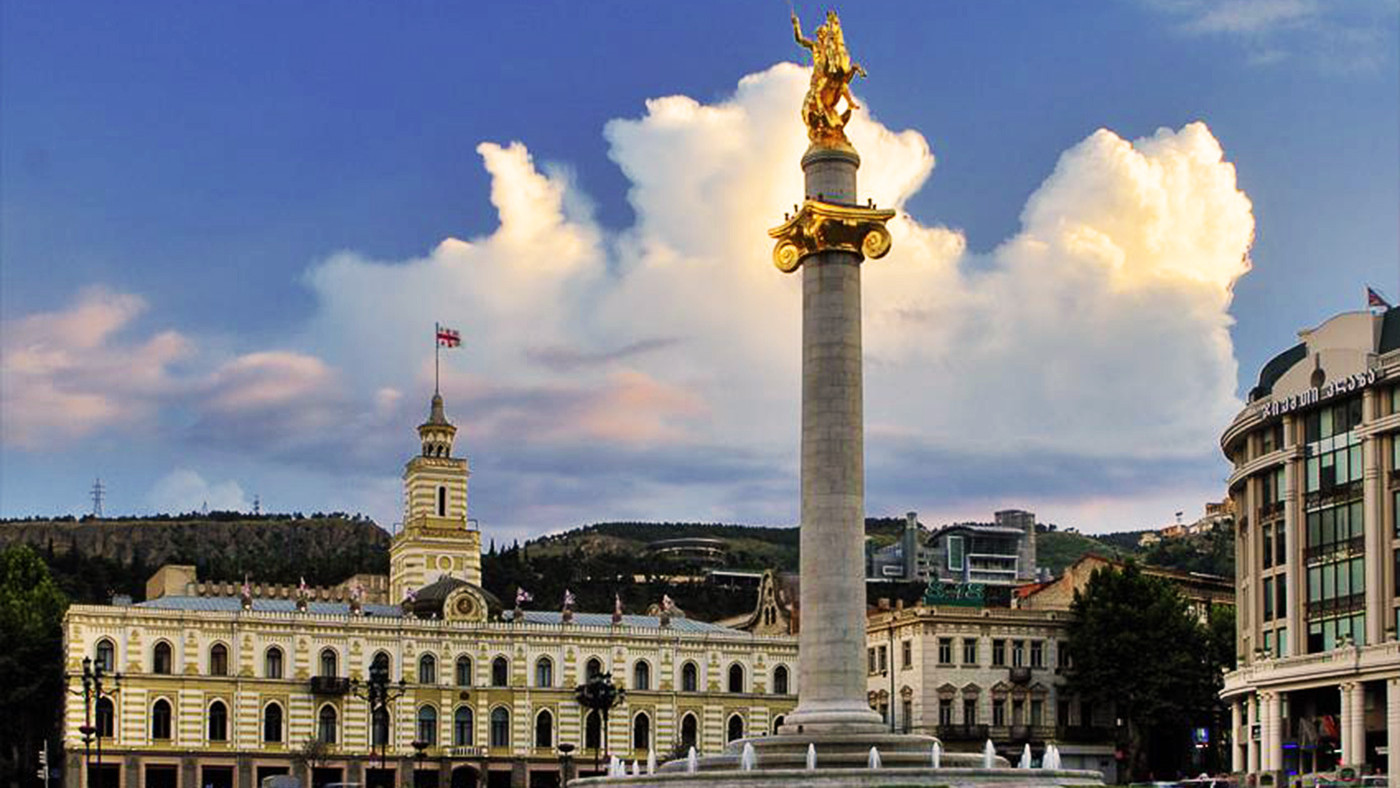 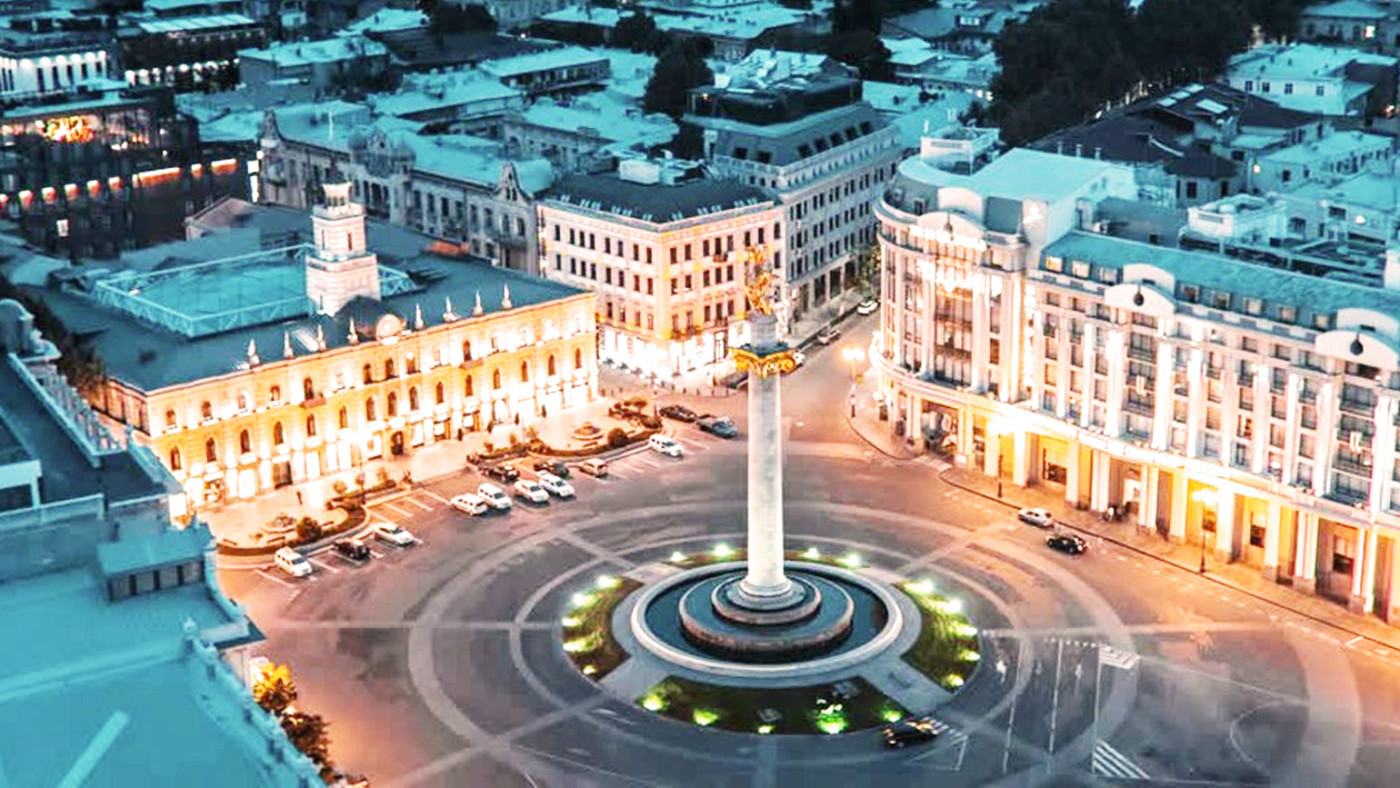 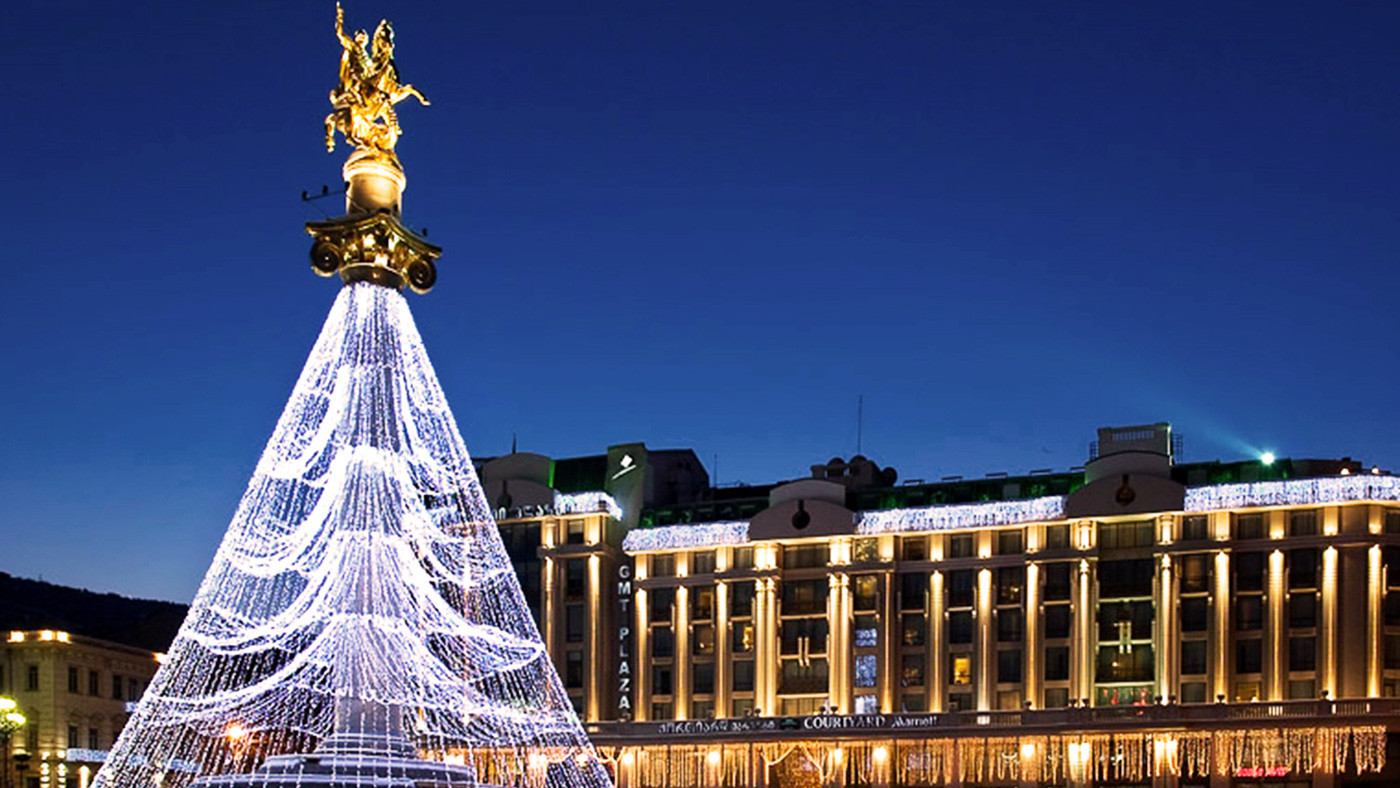 Freedom Square is one of the oldest central squares of Tbilisi. 44-meter-tall Golden statue of St. George stands in the very center (sculptor Zurab Tsereteli). Tbilisi City Hall (1878) is dominated by the South side whose symmetrical Neo-Moorish style facade and Central Clock Tower were intended to serve as the central axis of the square. It also determined the scale of the surrounding buildings.

The history of square goes back to 1801, when this area outside the wall of an old town Kala, cut by Sololaki mountain ravine and surrounded by Kings’ Gardens and Fig Trees was an uninhabited suburb, originally called Garetubani (outside district). On Sundays, there was a semi-official bazaar where Pheasants from nearby villages used to sell wood among other things. Because of that locals named the territory Square of Firewood - Drovyanoy.

The first structure built on the square was Transcaucasian Military Headquarters (1824-1829) - a stone building in Russian neo-classical style. Firewood was renamed Square of Headquarters. However, both were unofficial names. The next year (1825) Swiss architect Giuseppe Bernadazzi constructed a large neo-classical house for Georgian entrepreneur and philanthropists - Iakob Zubalashvili, which subsequently transformed into famous Theological Seminary (Stalin and many of the Georgian Menshevik party members studied here). One century later (1953), the Seminary became an Art Museum named after Shalva Amiranashvili (Museum of Fine Arts). Both buildings are well preserved today, but constructions between them were replaced in the Soviet period.

In 1829 the area was officially named Pashkevich-Erevanski Square honoring Imperial Russian military leader Ivan Paskevich-Yerevansky’s (Count of Yerevan in 1828) conquest of Erivan (present-day Yerevan) for the Russian Empire in Russo-Turkish War (1828-1829). It should be noted that in the same period, in 1829 Russian poet Alexander Pushkin lived not far from the Freedom square, short of Baratashvili Bridge. Today the street is still called Pushkin Street.

During the years 1840-1851 intense construction works on the Square began. Sundays were for trading and weekdays for remodeling the Maidan: Government House in the governor’s palace (current Students’ Palace) was renovated by Otto Simonce, police station and houses were built. Inspired by Renaissance architecture, with interior paintings by Russian painter Grigory Gagarin, an architect Giovanni Scudieri constructed one of the best theaters’ - the Grand Theatre. The theatre included Caravanserai, belonging to the famous merchant Gabriel Tamamshev. Now the Square was renamed as Theatral because of that fact. After a great fire in 1874, Grand Theatre burned down. The government planned to rebuild it, however, construction didn’t start right away, as the design was not officially approved until 1880 by Grand Duke Michael Nikolaevich. The theater finally opened after 16 years, in 1896.

As for the square’s eastern side, the old city wall was removed in 1880 and in 1885 the north-eastern side received the name New Garden (Novi-sad), where current Pushkin Square is located. Originally 3-floor building of First Credit Society (later became Bank of Georgia) by architect A. Salzman stood there, nearby was Tifliski Pasaj (1902-2003) building, designed by the architect Shimkevich.

When Russian Tsar Nicholas II was forced to abdicate in 1917, the leaders of the revolutionary parties gathered here and came up with the idea to rename Tbilisi's main square as Freedom Square.

One of the tragic historical events of that period have happened on Freedom Square, it was Tiflis Bank Robbery. The crime was organized on June 26, 1907, by a number of top-level Bolsheviks, including Vladimir Lenin, Joseph Stalin, Maxim Litvinov, LeOnid Krasin and Alexander Bogdanov headed by famous communist Kamo (Simon Ter-Petrossian). Heavily armed robbers attacked the State Exchequers carriage, transporting money through Yerevan Square (now Freedom Square) between the post office and Tiflis branch of the State Bank, and escaped with 241,000 rubles to fund their revolutionary activities.

In 1940 Caravanserai building was demolished and a marble tribune was built only to be destroyed in 1950 and replaced by Lenin statue 6 years later (sculptors S. Kavlashvili, U. Japaridze). The square extended gradually becoming central square of Tbilisi and received the name Beria Square after Lavrentiy Beria - a Georgian Bolshevik and Soviet politician. After execution of Beria in 1953 local officials changed the Square name again to Lenin Square.

During Tbilisi civil war (1991-1992) 2-story buildings on the west side of the square were destroyed: Hotel Kavkaz and the former Hotel International located at the corner of LeOnidze Street. they were replaced with 9-story Marriott Courtyard Hotel in 2002 (architect V. Tsintsadze).

In August 1991, Lenin Monument was symbolically removed, along with Communist governance in Georgia. At the initiative of the first democratically elected President of Georgia Zviad Gamsakhurdia the Square got the name Freedom Square again.

After Rose Revolution (2003) the Liberty Monument depicting St George cutting the tang and winning the dragon (sculptor Z. Tsereteli) was mounted in the place of dismantled Lenin’s Statue.

Strolling down or up rise the streets, observe the daily life of the city, explore the routine, shop international and local brands and fully enjoy your stay in Tbilisi.