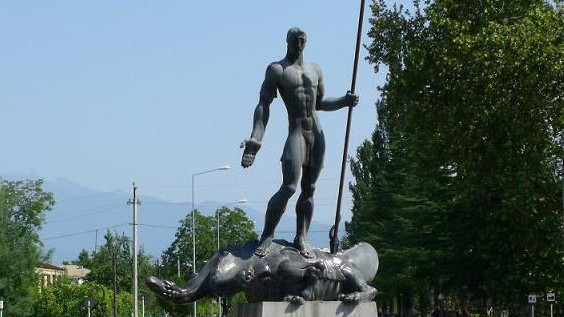 the bronze Statue of Good vs Evil (by Demur Eloshvili), depicting St George slaying the dragon. 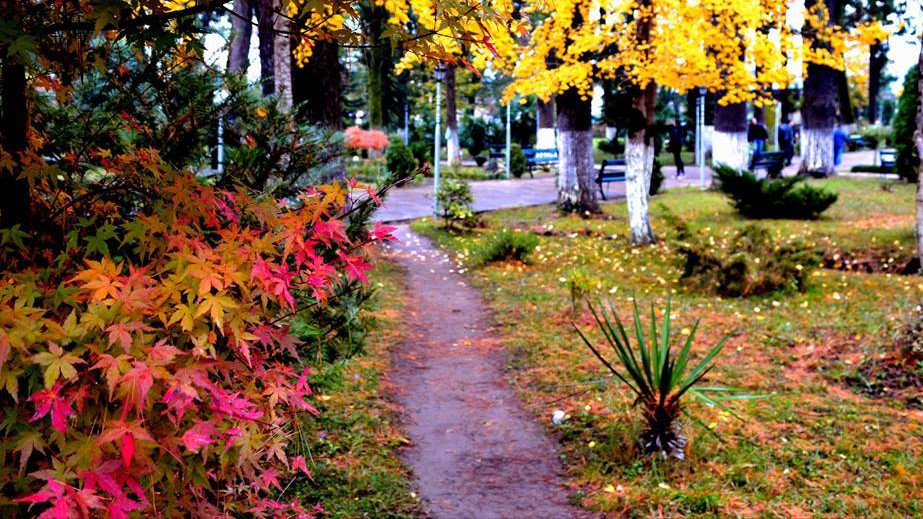 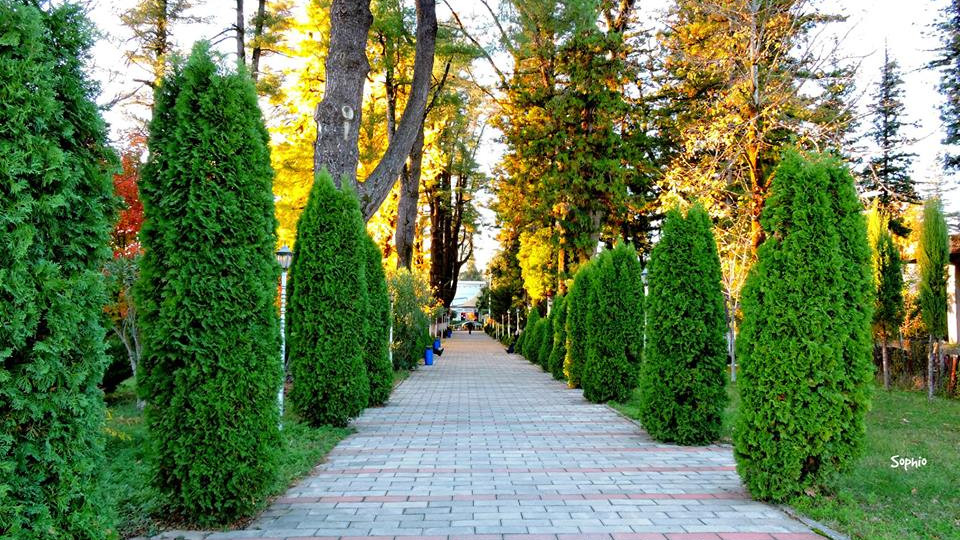 According to archaeological excavations, the record of human ancestors goes back to ancient times, starting from the Stone Age and comprising periods aftermath.

A century-old park has been main visiting place of Chkhorotsku for years. Here you will find Lapan - a maple plant and 10 double - leafed Gringko trees included in the Red Book. The grave and bust of Besarion Keburia - the first pilot of Georgia is located inside. The monument honoring memory of victims fallen on April 9 (authored by Demur Antia) also stands in the park.

Two-storey Soviet-era building of Historical Museum (1978) stands in the city center, housing more than 22 thousand exhibits. It should be noted that all items on display are made by the residents of Chkhorotsku from local raw materials: the first iron smelting machine, a tobacco cutting machine which was actively used in Abkhazia and Samegrelo, a jewelry-making machine, the first silk weaving machine in Western Georgia founded by local resident Basa Sichinava. In 1860, the newspaper Iveria even wrote that “silk made in Chkhorotsku was exported to Marseilles and Lyon".

According to the employee of the museum: “Historians suggest that in ancient times our ancestors living in this area used to mine stones in the caves and melted iron from it. A stone is stored here, 58% of which contains iron. Such a stone is mostly found in Zisnakhne cave. Using these stone tools people made high-quality, exquisite decorations. We keep samples of bronze, agate, gisher, stones, and glass jewelry, that even modern women would wear with pleasure".

Agriculture is developed in the region. Minerals, iron, limestone, dolomite, semi-precious stones and andesite-basalt were mined here. Beekeeping is especially popular activity among citizens. The long-trunk bee of Mukhuri village is a three-times Gold medal winner at the World Apiarist Congress. Compared with other species of bees, Mukhuri bees make more honey. Mineral water Lugela’s springs are spread at the distance of 4 km from Mukhuri, in the resort of the same name. Unique therapeutic qualities of Lugela springs are widely acclaimed. This healing chloride-calcium water effectively treats diseases of the skeletal system and joints, allergies, stomatitis, jade, bleeding, and so on.

Mineral water Lugela began to be bottled for the pharmacy chain in 1946. Lugela toothpaste is prepared from it, and is also regularly used in cosmetology.

Visitors usually consider making a quick stop in this town before heading to the neighboring cities: Martvili to the East, Zugdidi to the Southwest, Senaki to the South and Mestia to the North. The region is distinguished for humid subtropical climate, pristine nature, striking sceneries and interesting cultural monuments. Throughout the area you will discover chestnut, beech and boxwood forests, majestic waterfalls and lakes, caverns, also remarkable historical sights.

Numerous ancient temples and fortresses created by the ancestors withstood the test of time and are still preserved in the form of ruins. Some of them have been studied by scientists, but many monuments are left unattended or not fully explored. To be mentioned: Garahi fortress (Najagu) defensive structure (16-17th c), Najikhari Fortress (Middle ages), Otsindale St. George Church (11th century), St. George's Church of Kveda Chkhorotsku, etc.

In the center of the town stands the bronze Statue of Good vs Evil (by the architect Demur Eloshvili), depicting St George slaying the dragon.

Tourism routs are just developing. You can enjoy the natural beauty of unspoiled and untapped area.

Below is the list of sites, which belong to the cultural heritage, but are not unexplored yet:

Akhuti district: Single nave basilica - Legersame church of the Savior, XIX-XX centuries. On the west side of the temple in the church yard cemetery there is a middle ages Crypta with a slight trace of painting on the surviving wall.

Akhuti, Naberagu: Middle age ecclesiastic building foundation and the ruins can be seen.

Akhuti. Gogoleti ruffles single-nave basilica built of cut stone and a fragment of a painting, Middle age transitional period. On the east wall was placed a stone sculpture of an Aries head, which is now kept in the Chkhorotsku Historical Museum.

Akhuti, Kukhalashvili Karmidamo with oda-house. The second half of the XIX century. The four-room ode-house is made of chestnut material. Is ornamented, in good condition. It has a yard decorated with Colchian plants.

Garakha Najagu fortress XVI-XVII cc. Two towers are 300 meters away from each other.

Kirtskhi. In a high place of the school yard there is a church of middle ages and a chapel belonging the Goshu family. The excavated items are kept in the Chkhorotsku Historical Museum and the Kirtsk School Museum.

Letsurtsume. Naokhvamu remains of the foundation of middle ages are currently preserved.

Lejike. Remains of Khomakirde Architectural complex fence and gate. On the left side of the river Ochkhomuri. Rectangular building belongs to early Middle Ages.

Lejike. Church of Middle ages - has been restored and is operates.

Nakiani. Church of the Savior at Kalichava Cemetery. Transitional period of Middle Ages, with late remodeling. The temple is built of cut stone. Is currently is in good condition.

Saracon. Najikhari at Sajalaghonio cemetery. Remains of a castle tower with a fence. Middle ages.

Giorgoba –St. Georgi’s day is held annually on November 23 in the village of Taia.