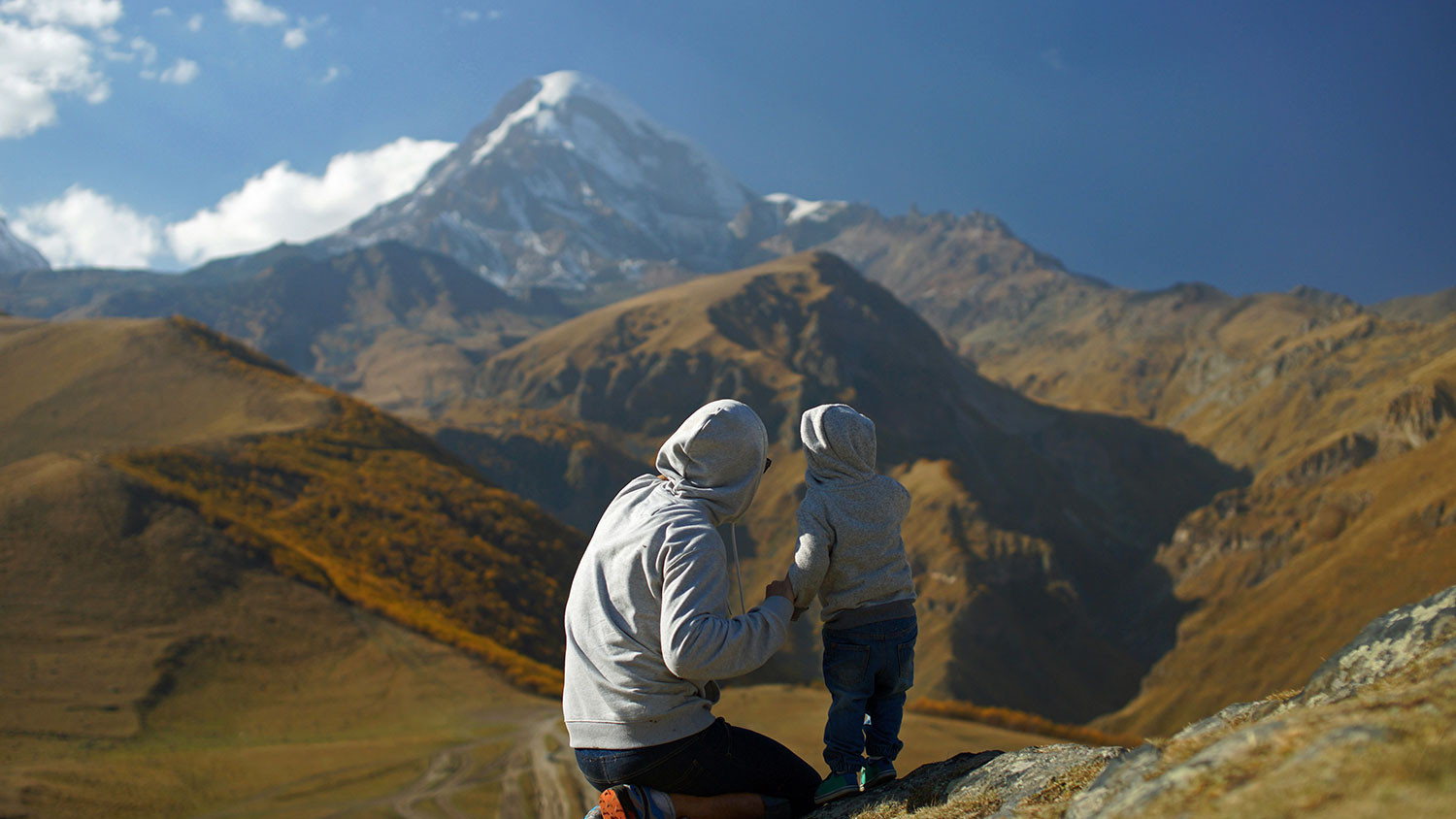 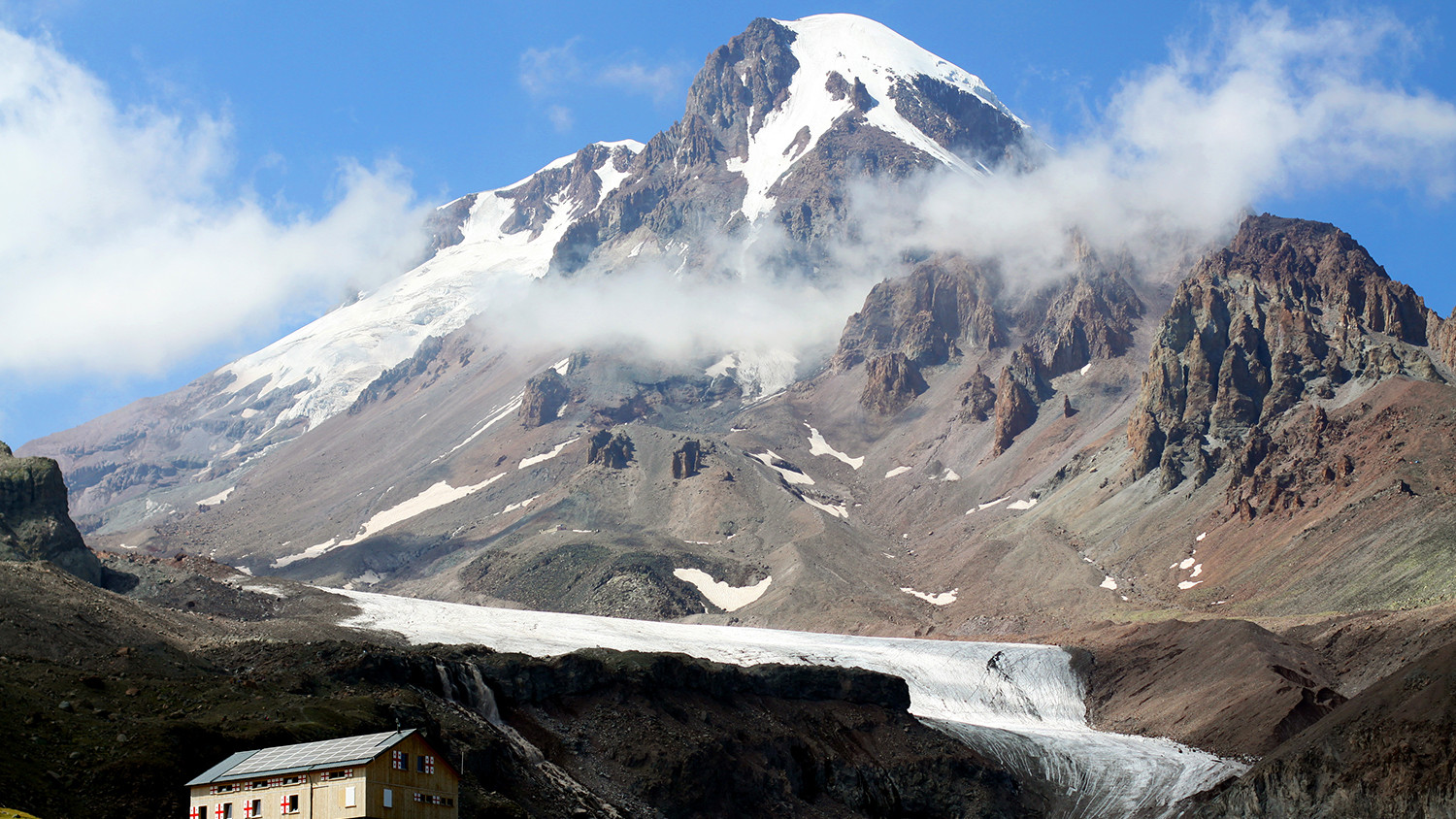 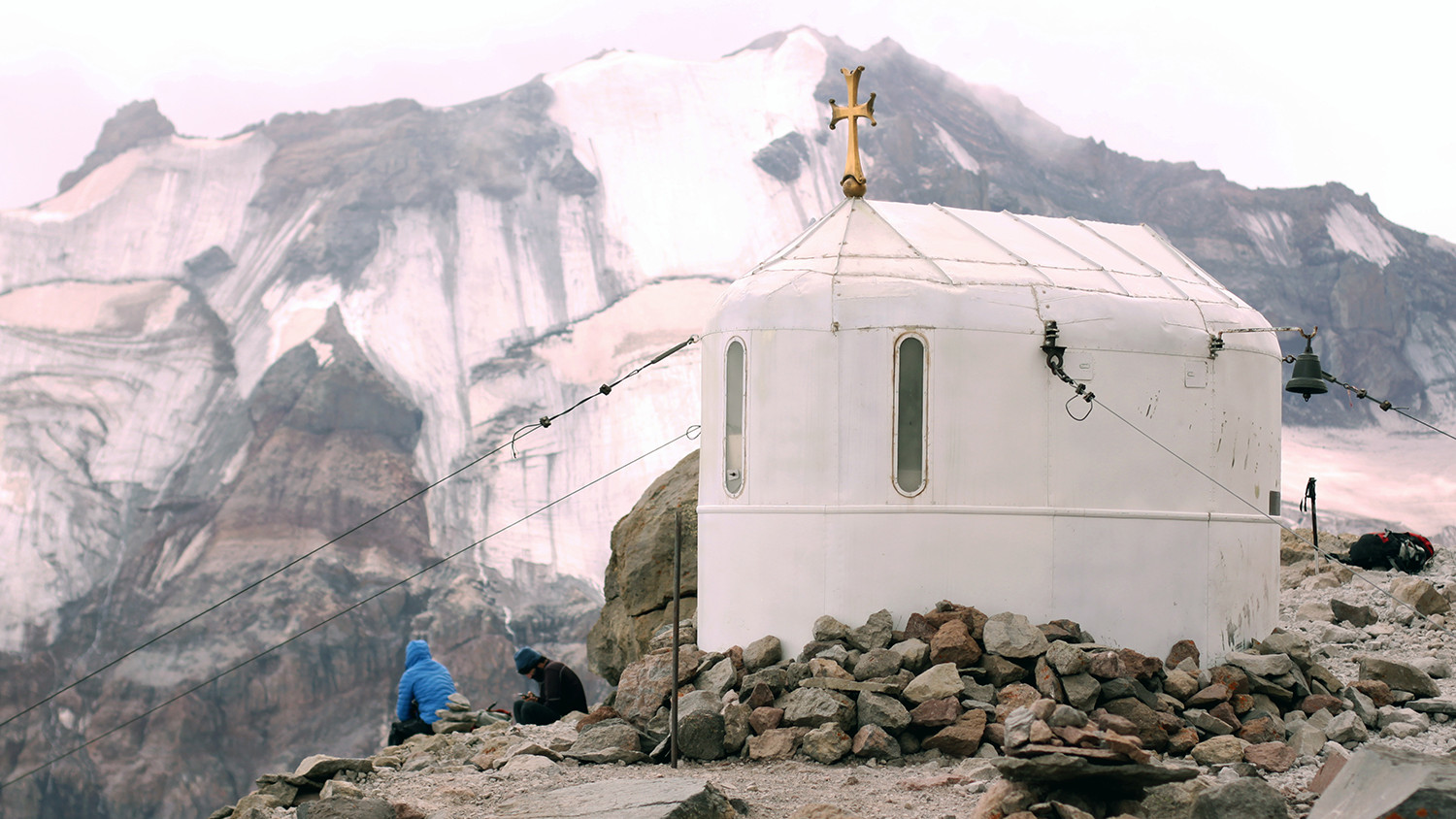 On the way to Kazbegi Summit 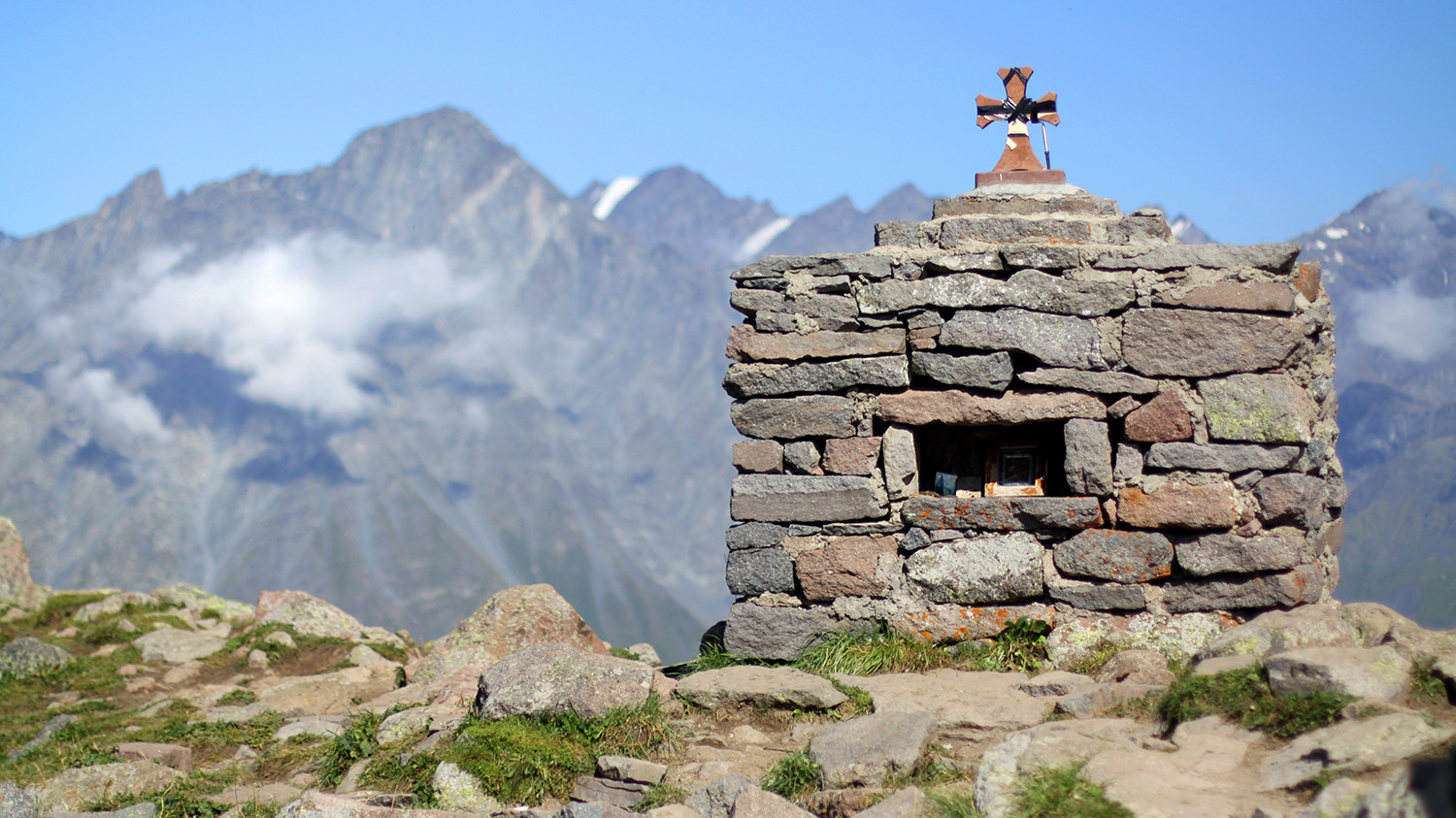 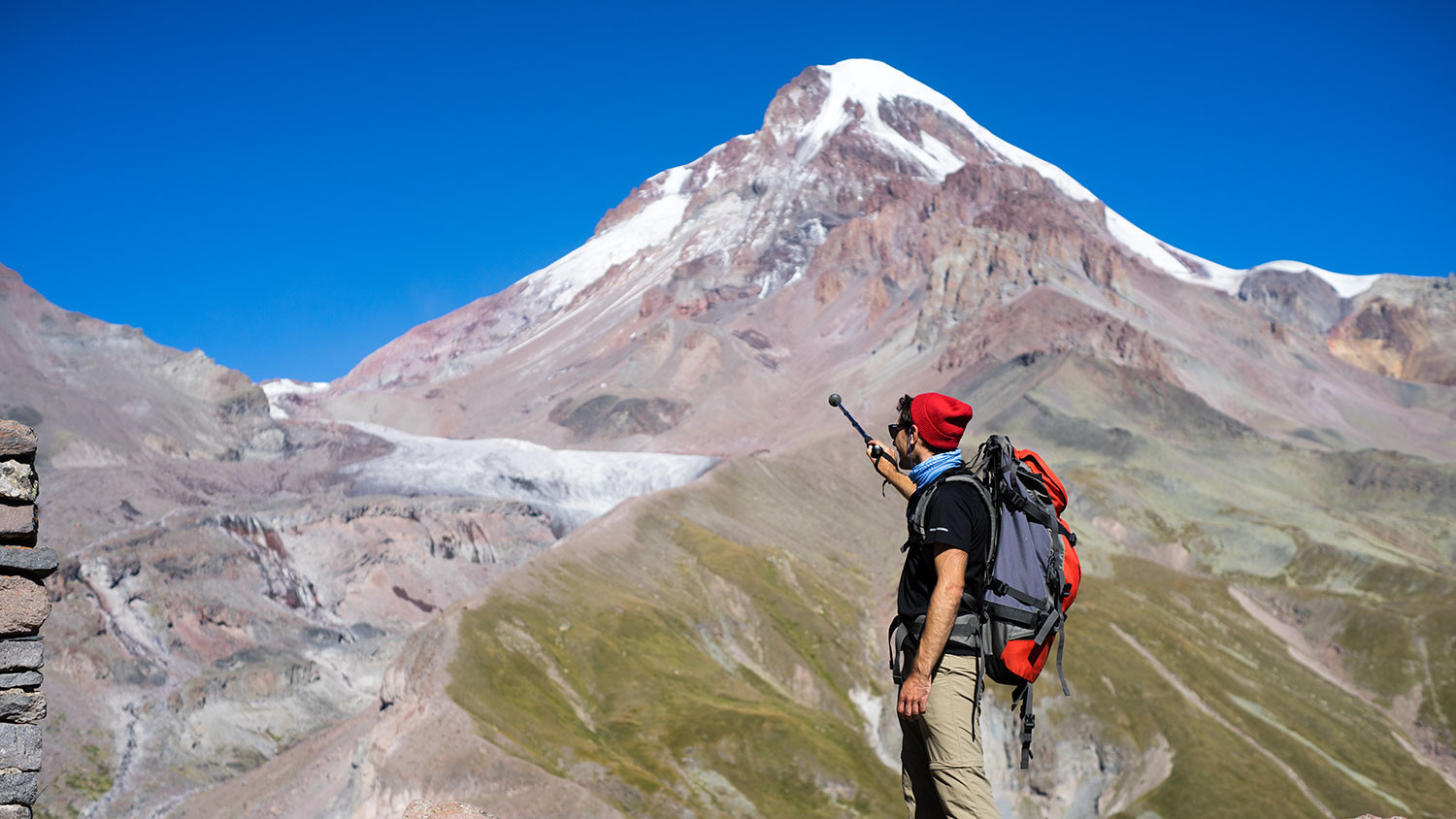 The summit lies directly to the west of the town of Stepantsminda and is the most prominent geographic feature of the area. It is the highest peak in Eastern Georgia. The name in Georgian, Mqinvartsveri, translates to "Glacier Peak" or "Freezing Cold Kazbegi is located on the Khokh Range, a mountain range which runs north of the Greater Caucasus Range, and which is pierced by the gorges of the Ardon and the Terek. At its eastern foot runs the Georgian Military Road through the pass of Dariali 2,378 meters.

The mountain itself lies along the edge of the Borjomi–Kazbegi Fault (which is a northern sub-ending of the North Anatolian Fault). The region is highly active tectonically, with numerous small earthquakes occurring at regular intervals. An active geothermal/hot spring system also surrounds the mountain. Kazbek is a potentially active volcano, built up of trachyte and sheathed with lava, and has the shape of a double cone, whose base lies at an altitude of 1,770 meters.

Kazbek is the highest of the volcanic cones of the Kazbegi volcanic group which also includes Mount Khabarjina (3,142 metres).

Owing to the steepness of its slopes, the glaciers of Kazbegi are not very large. The total combined area of all of Kazbegi glaciers is 135 km². The best-known glacier is the Dyevdoraki, which creeps down the north-eastern slope into a gorge of the same name, reaching a level of 2,295 m. Kazbegi's other glaciers include the Mna, Denkara, Gergeti, Abano, and Chata. The recent collapse of the Kolka Glacier, located in a valley between Mt. Jimara and Kazbegi in the year 2002 was attributed to solfatara volcanic activity along the northern slope of the mountain, although there was no eruption. In addition to the 2002 event, a massive collapse of the Devdaraki Glacier on the mountain's north-eastern slope which occurred on August 20, 2014, led to the death of seven people. The glacier collapse dammed the Terek River in the Dariali Gorge and flooded the Georgian Military Highway.

Mount Kazbegi is associated in Georgian folklore with Amirani, hero, who was half-god and was chained by Lord on the mountain in punishment for having stolen fire from the gods and giving it to mortals (some Georgian version of Prometheus). The location of his imprisonment later became the site of an Orthodox hermitage located in a cave called "Betlemi" (Bethlehem) at approximately the 4,000-meter level. According to legends, this cave housed many sacred relics, including Abraham's tent and the manger of the infant Jesus.

The meteorological station was built on the way to summit in 1941 and it now serves as a base camp for those who come here to climb mount Kazbegi.

Caucasus skitouring network organized expedition to survey Mt. Kazbegi height. For the first time, on 27 May 2019 at 12:22 GMT+4, a survey team placed a GPS receiver on the Mt. Kazbegi peak. The new height is defined with the WGS 84 datum. Height was determinate with 5mm accuracy. Defined height is 5053.927m.

The area around Mount Kazbegi is designated a nature reserve and includes beech forests, subalpine forests and alpine meadows. Many of the plants and animals in the reserve are endemic to the Caucasus region.