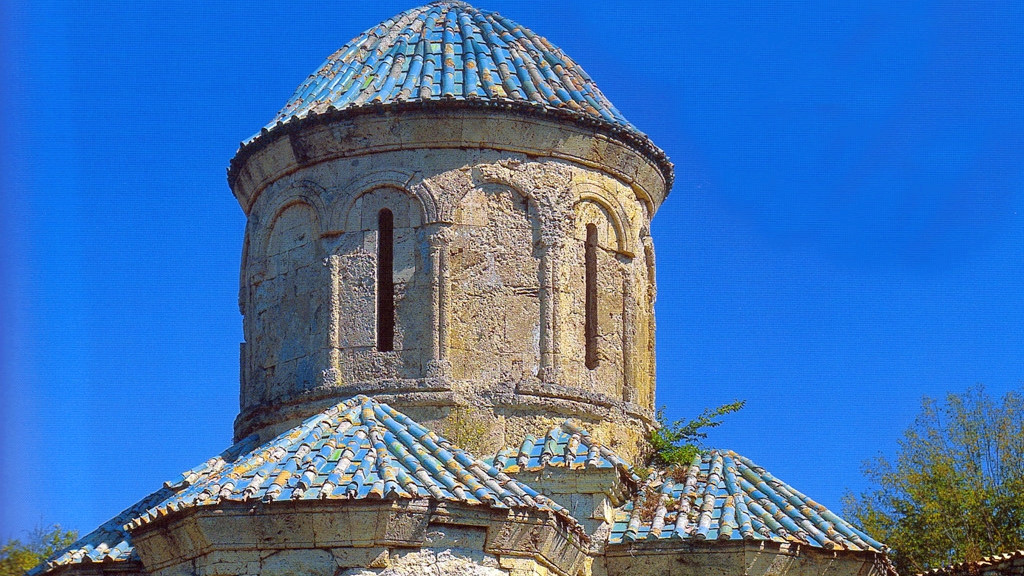 Kvetera church is a part of the historic fortified town in Kakheti, Akhmeta Municipality, on the right bank of the river Ilto, 12 km away from Akhmeta.

The Church in Kvetera is erected on the top of a hill within the structure of the 10th century Kvetera Fortress. The Church has a very interesting composition, light, refined, and exquisite. Tetraconch in plan (four-apse cross with four niches between apses), it is built of carefully hewn local tuffa stone named shirimi. The central square of the church, crowned with the dome is intersected crosswise once on the naves of the cross and then bias by its three-quarter niches. We have in the result as though a star with rays of different lengths. There are the chancel-bays in front of each apse.

On the corners of each nave, there are three semi-columns. The imposts of arches have the profile, which is repeated in imposts of all under-cupola and apse arches as well as on the basis of the semi-spheres of corner spaces. All arches are round. The transition from the square to the under-cupola circle is created by the system of arches, placed at different levels. The dome is round inside with one window on the East and West and two windows on the North and South. There are also the windows in all apses and corner niches. In the chancel apse, there are three windows. The entrances to the church are in southern and western apses. The altar from the hewn stone is preserved in the chancel. From the outside, the apse ledges are pentahedral. All facets are adorned by arches. The three-quarter corner niches are round from outside. Beyond corner niches, there are four corners of the basis of under-cupola square. The drum of the dome is divided into 12 arches. The church is roofed with glazed blue tiles.

As a certain squad in the history of architecture, Kvetera Church is interesting due to its composition conception. Kvetera Church has been forethought and configured by its architect as a graceful, miniature, and decorative building. Within the framework of capacities of the 10th century Kakhetian architecture, without using ornamental carving, architect created fascinating monument. Kvetera Church is a small elegant building, which reproduces, with innovative and creative modernization earlier achievements of the ecclesiastic architecture in Georgia.