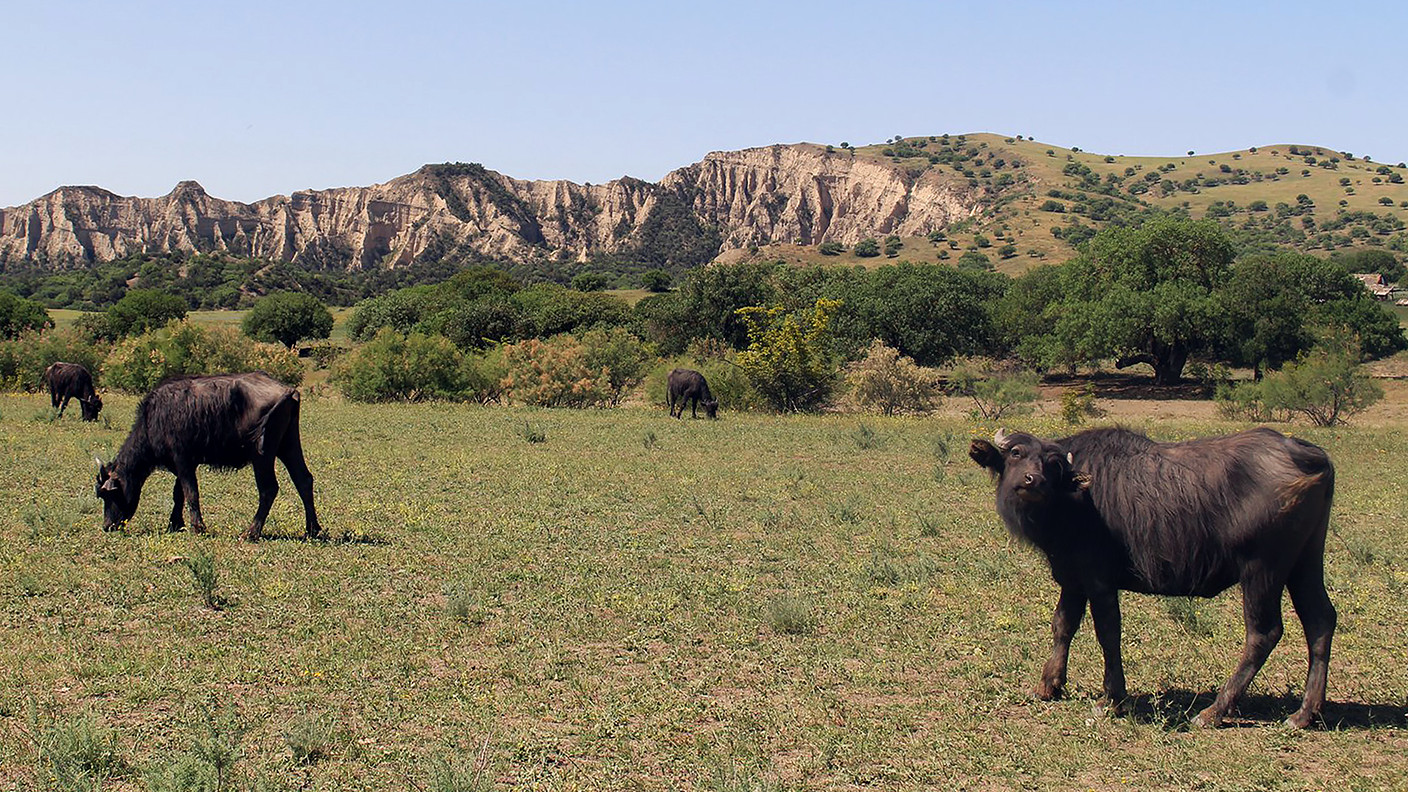 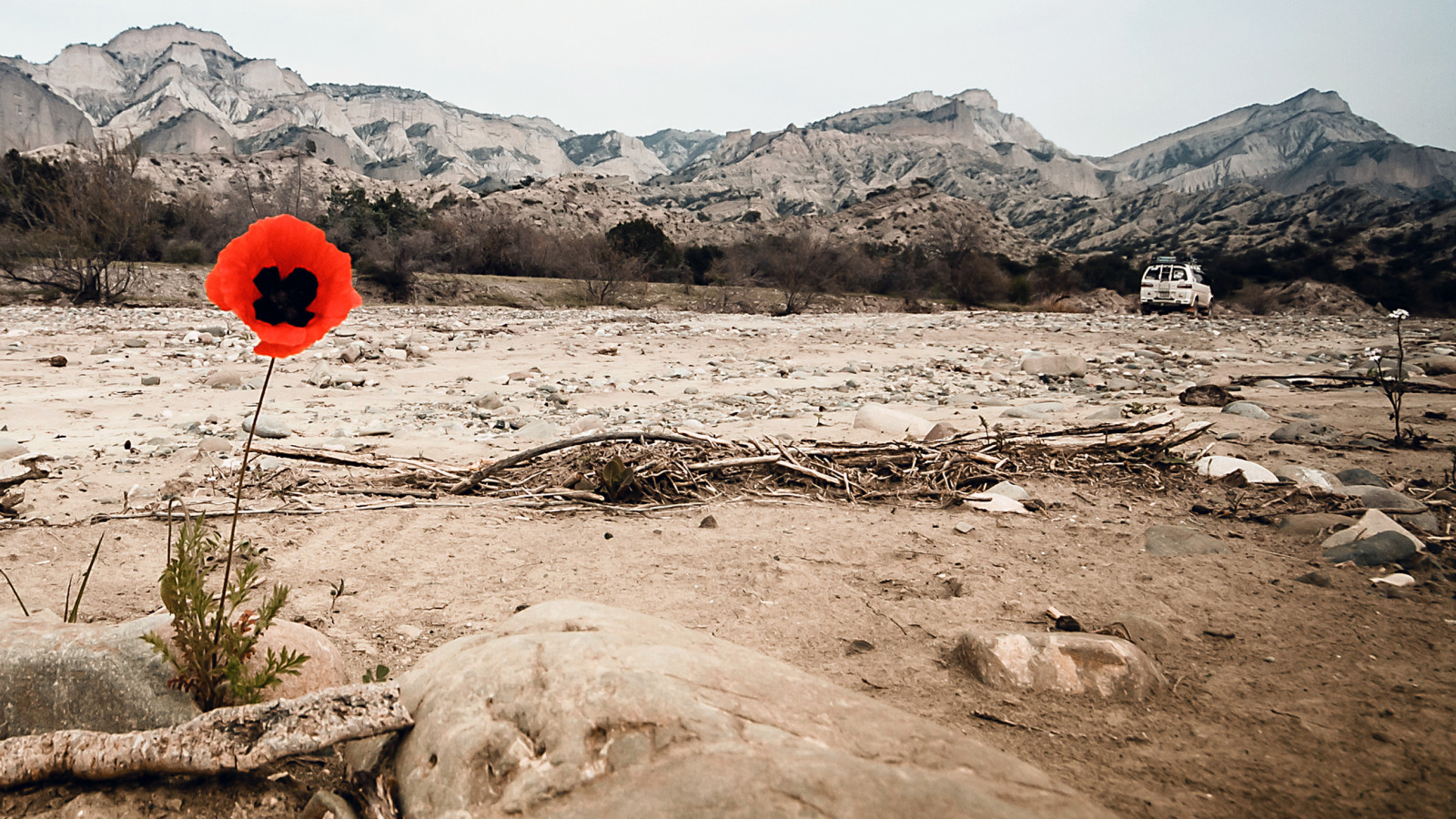 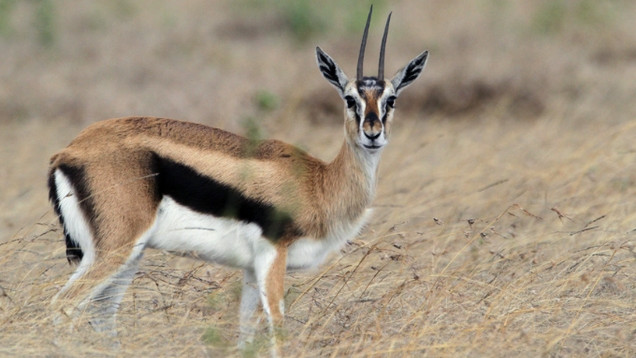 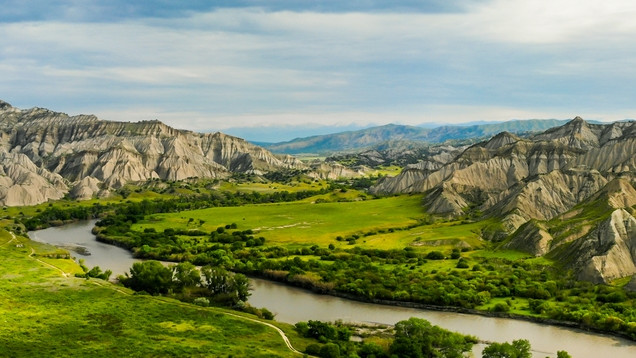 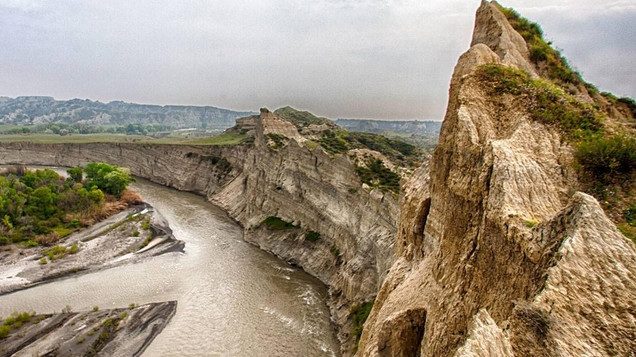 The name Vashlovani derived from the natural similarity and disposition of pistachio and apple trees that leaves the association of the fruit garden. It is also home to the remarkable cliffs-of-the-canyons, locally called the "Sharp Walls” and the magnificent Alazani flood plains and forests. The pistachio and juniper trees are unique to the place.

Its total area amounts to 35053,7 ha. The administrative and visitors center of the national park is located in Dedoplistskaro. The exhibition and presentation hall is designed in the administrative building, where visitors have the opportunity to become familiar with the specifics of protected areas, existing tariffs, safety rules, and choose the desired travel route. Vashlovani Protected Areas tourist trail network gives the possibility of hiking for one or several days. Paths are marked and well-arranged. Bungalows and camping sites are arranged along the routes. Sites for setting up a fire are also allocated. The national park offers hiking, geological, photo, cultural and educational tours

Note: it is necessary to check-in in Visitors center before visiting the national park. Please have an identity card and a car-passport with you.

The river Alazani running along the eastern part of the National Park offers visitors a great opportunity for year-around boating. However, visitors are also welcome to explore the park by foot, horse, or vehicle on designated tourist trails.

Route 1: 1-day trail - Eagle Gorge—Khornabuji Fortress.
Length – 4-5 km grade medium, car route combined with pedestrian
The route begins from the limestone rocks, where you can see the rare endemic plant Campanula Kachethica. Afterward, the footpath leads to the western slope of the valley, where you will enjoy spectacular panoramic views of the protected area. In the distance, you can see soaring Griffon Vultures. Eagle’s canyon is home to other exceptionally beautiful birds, among them- the Pheasant and Black Stork. You can see “Khornabuji” Fortress 5th c one of the beautiful historical monuments in the protected areas. Eagle Gorge is a canyon type formation creating landscapes of wonderful beauty against a background of the Caucasian Ridge and Alazani valley. 145-160 million years ago an inert material was accumulated in this part of the ocean at the expense of the growth of coral reefs,  from which these two hundred meter rocks were formed. Just from this period the conifer bush Biota (Biota Orientalis), an inhabitant of the Tibetan mountains, has been grown here. At present Artsivi Kheoba is a basin of four nourishing springs of the city of Dedoflistskaro, that is taking strength in spring with increasing of water. It is spilled over the limestone rocks buried in lianas like the most beautiful waterfalls. The southern slopes of the gorge are adorned with abundant soft white flowers of endemic bellflower of Kakheti. In this gorge, it is also possible to see several species of orchid recognized as the most beautiful flower in the world.
Artsivi kheoba (Eagle gorge) is a real country of birds. At different times of the year here can be seen up to 70 species of birds from the Eurasian griffon, with its 2.8m wingspan and weighing more than 10kg, to the smallest bird –Winter wren(Troglodytes troglodytes), whose size is 9.5cm. and weight does not exceed several tens of gram. A lot of interesting birds can be met in Artsivi gorge but the most impressive one is the Black Stork (Ciconia nigra) that causes great wonder and emotion. If you are lucky, on the rock slopes you might notice the most famous species in the flacons family, such as flacon and hawk.

Route 2: 1-day trail –Pantishara -Bear Canyon
Length – 110 km. grade medium, car route combined with a pedestrian.
The modern image of the preserved territories of Vashlovani dry gorges were developed in quaternary, 0,01-2 million years ago in the Neozoic era. The analysis of geological strata shows that in different periods Vashlovani had been a sea button. It is confirmed by the sea fauna discovered in rock lines. Furthermore, the relief forms built of marine sediments sharply differ from the forms built of continental sediments. The relief developed on the continental sediments represented by smothered hill rocks and plain surfaces. On the marine sediments, that are less resistant to erosion, is developed the ’’badland’’ relief –the world of natural labyrinths. Here are a lot of reliefs, such as ”pseudokarst’’ in friable rocks at the bottom of the ridges( negative underground forms- funnels, wells, hollows) columnar and fortress-like forms on the abrupt vertical southern slopes of the ridges without vegetation and built of easily decomposable clay and sandstones, erosive residues. One of the wonders of Pantishari Canyon is a “town” of swallows (Delichon urbica), built on a negative wall of the rock in the middle of Pantishati Canyon. It includes several thousand of nests. This so-called town was built by the swallows and it shows the manner of their colonial life. In early spring this town is occupied by swallows. Later, the swallows, returning from warm countries, are furiously fighting to get back their town. As a rule, the fight is ended with driving the swallows out. The swallows are building their nests with a mixture of grass, mud, and their own saliva, which hardens after drying out and sometimes maintains its strength even for several years. Such colonies of swallows are not observed in any other corner of Georgia

Rout 3: 1-day trail Takhti-Tefa Mud Volcanoes.
Length – 110 km. grade medium, car route combined with pedestrian
Natural monument ”Takhti Tepa”-620m sea level- this inorganic monument differs from any other place. There are rows of volcano of different height- from 20 to 150cm. On the top of their hills, there are round mud craters seething and boiling up continuously. Mud, oil, and gas have been ejecting from the holes. Mud volcanoes are covered with halophytes: Kalidium (Kalidium capsicum), Sea beite (Suaeda altissima), (Petrosimonia brachiata), Sea-lavender (Limonium meyeri). The slopes around the volcano are covered with semi-desert phytocenosis. Mud evolved from the volcano has therapeutic properties.

Route 4: 2 days trail Pantishara -Bear Canyon-Usakhelo (viewpoint)-Mijniskure
Length – 160 km. grade difficult, car route combined with pedestrian
According to paleontological materials, Pliocene lowlands(2.5 -7 million years) and foothills of east Georgia were covered with savanna and there dwelled Southern Elephant, mastodon, giraffe, rhinoceros, antelopes, saber-toothed tiger, ostrich, and monkey Dryopithecus. Fossilized fragments of tropical plants are found in geological mother rocks. The analysis of geological strata showed that in different periods Vashlovani had been a sea bottom too. It is confirmed by the sea fauna discovered in rock lines. One of the wonders of Pantishari Canyon is a “town” of swallows (Delichon urbica), built on a negative wall of the rock in the middle of Pantishati Canyon. It includes several thousand nests. This so-called town was built by the swallows and it shows the manner of their colonial life.

Amateur fishing in Mijniskure – It is possible fishing on the Alazani river bank. Pistachio arid light forests that visually resemble African savannas (Pistacietum)(specific individual trees are aged 1000 years, while the average age is 500 years).They are common incomparably soft, less slanting slopes in Vashlovani cave, Mijniskure, Takhistskali, Alpadara, Chaibulaki gorge, and surroundings of Usakhelo (nameless) mountain. Pistachio tree wood is as hard as iron; due to this and deep roots (20-30 m), it is rather drought-enduring plant. Under its crown, you can often see “daughter’’ water-resistant ‘’green chevelure’’ junifer.

Route 5: 2-day trail Mijniskure-Black mountain (shavi mta)-Kaklis Kure
Length – 195 km. grade medium, car route combined with pedestrian
In Vashlovani high motley grass forests of the grove are spread within 40 km along the Alazani River from Kakliskure (nuts bay) to Mijniskure (edge bay). The main species of forests are aspens-black poplar (Populus nigra), poplar (Populus hybrid), and petiolate oak(Quercus pedinculiflora). Feather grass Steppe is less spread as compared with the bluestem steppe. One can find it in Vashlovani depression on its northern valleys and Shavi Mta. These plants are mainly represented by Stipa lessingiana- steppa Feather grass and Stipa capillata, it is rich of ephemers, the soil mostly is stony.

During your trip, it is PROHIBITED to:

You are recommended to be casually dressed, suitable to the field conditions; you should wear a hat, sporting trousers, boots and raincoat. Bring water and food with you.

Order the private trip below or contact us here