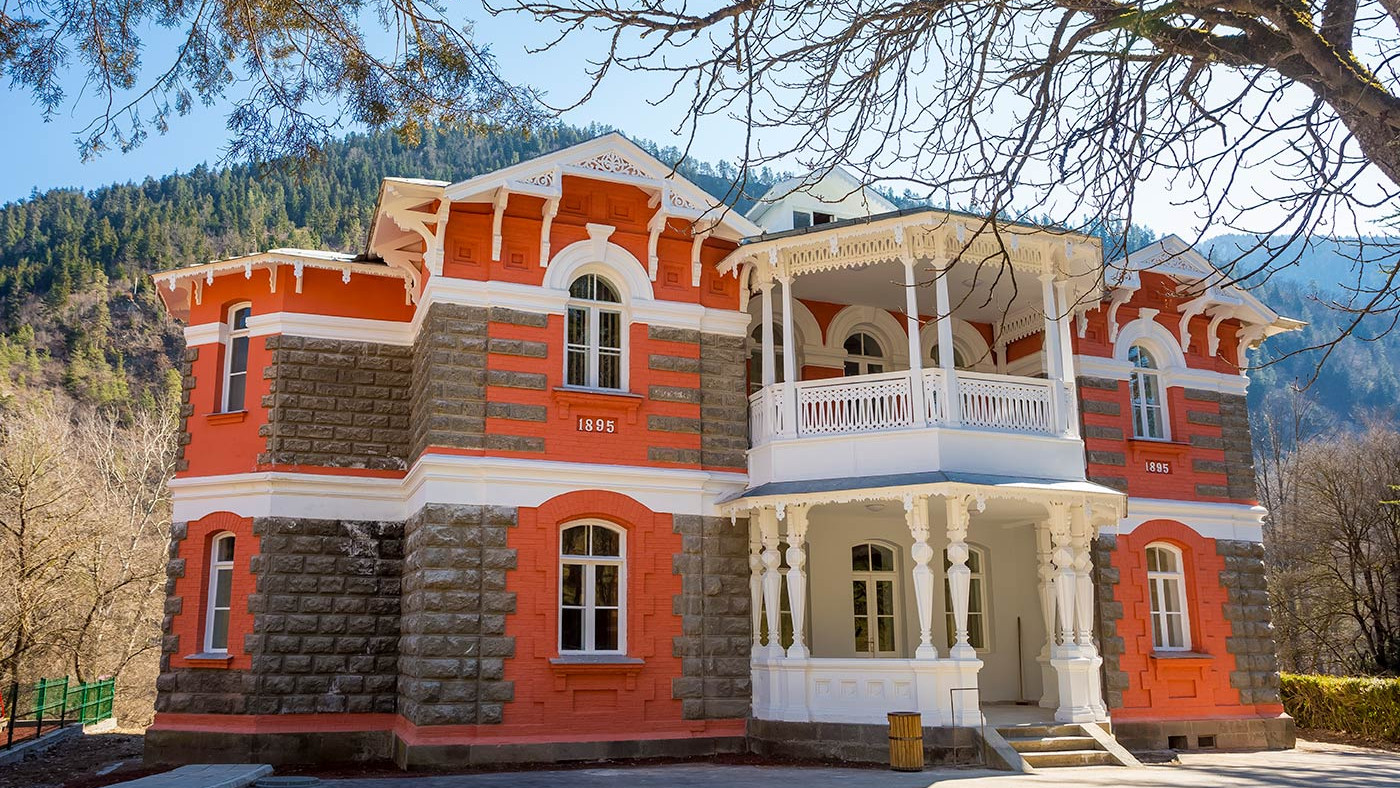 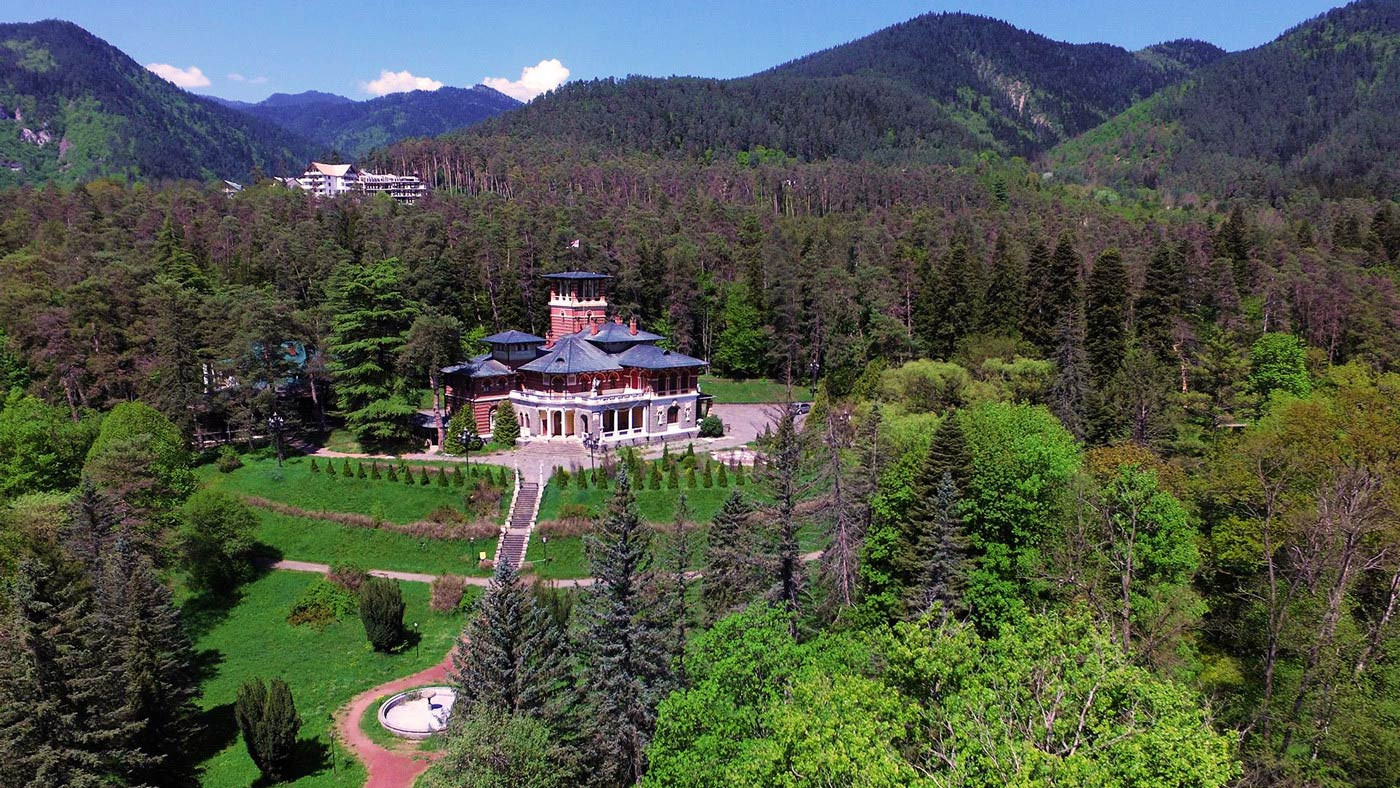 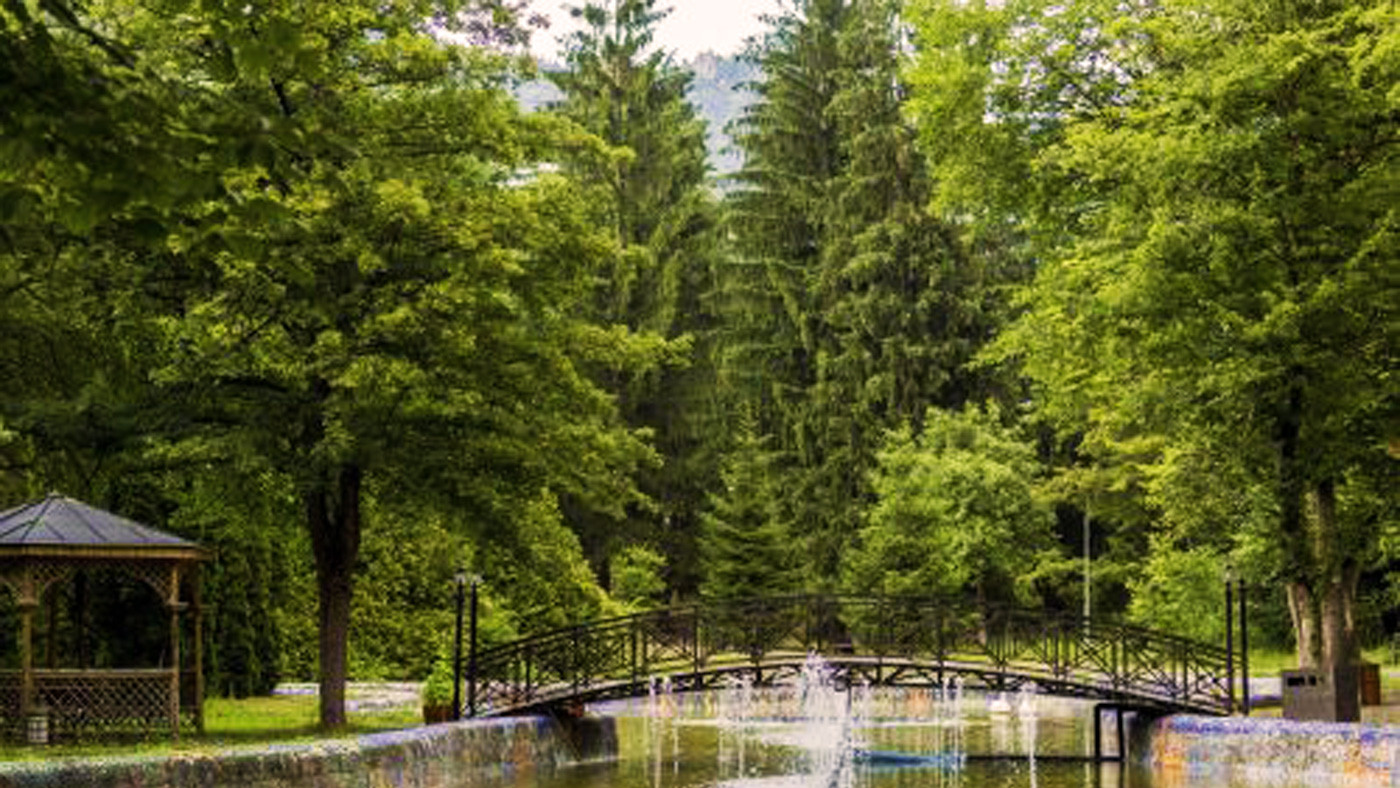 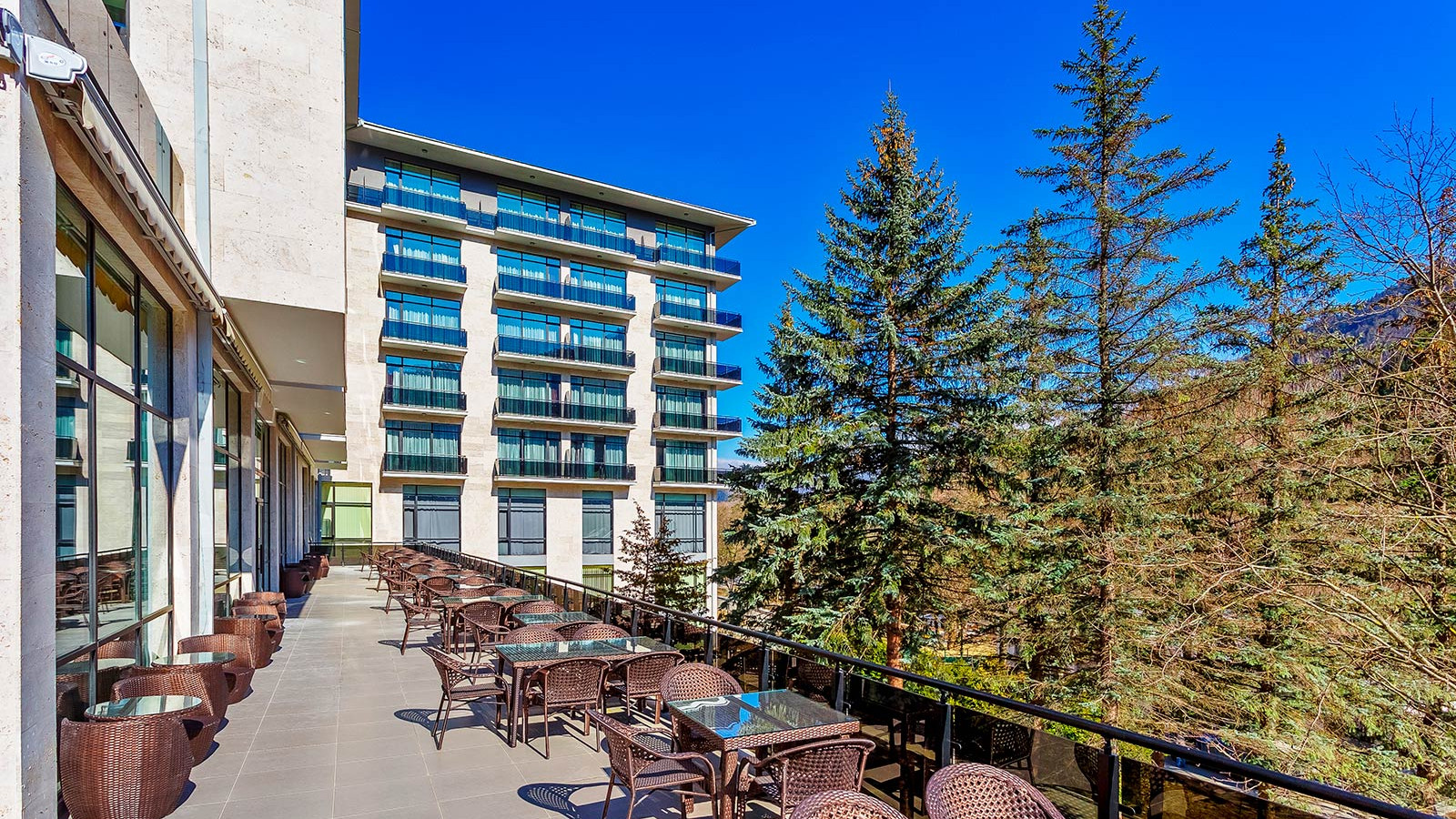 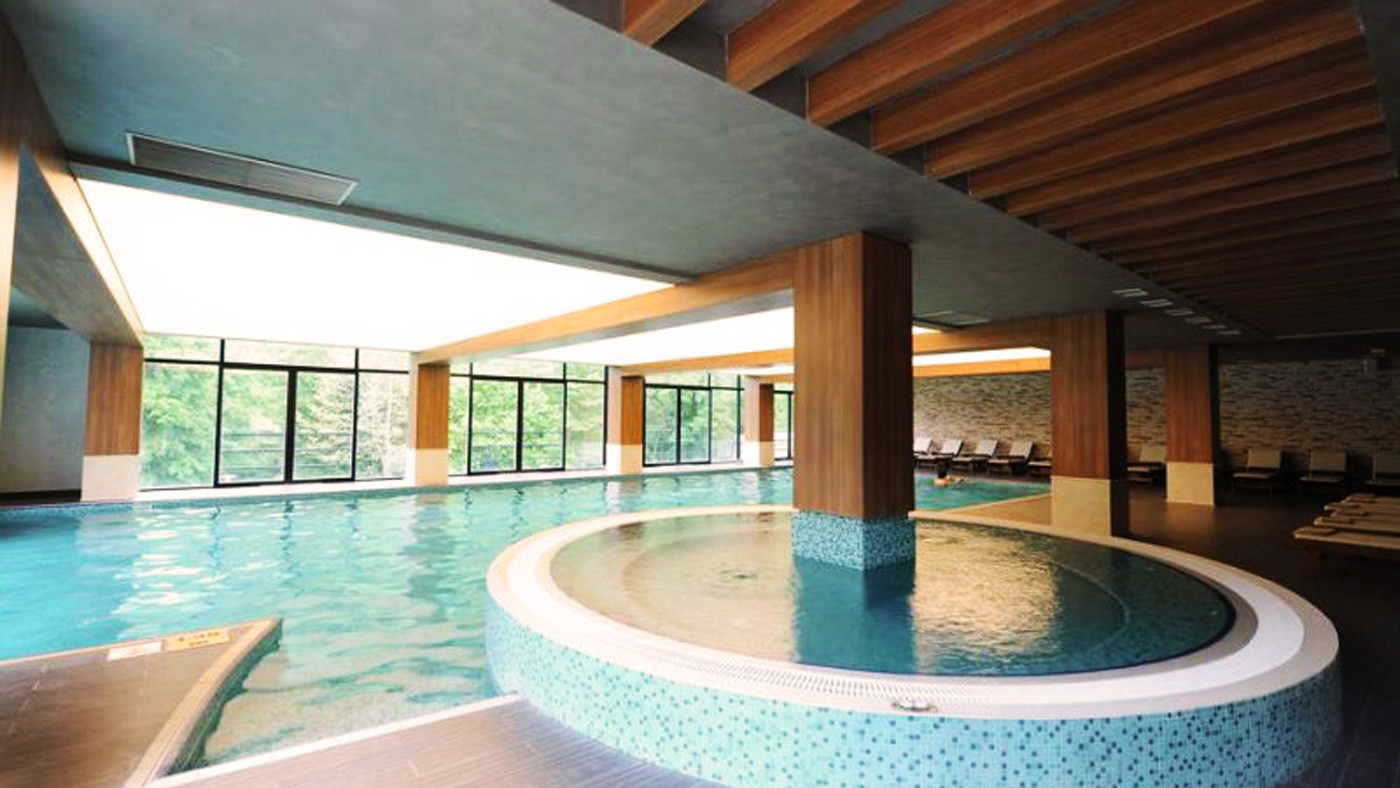 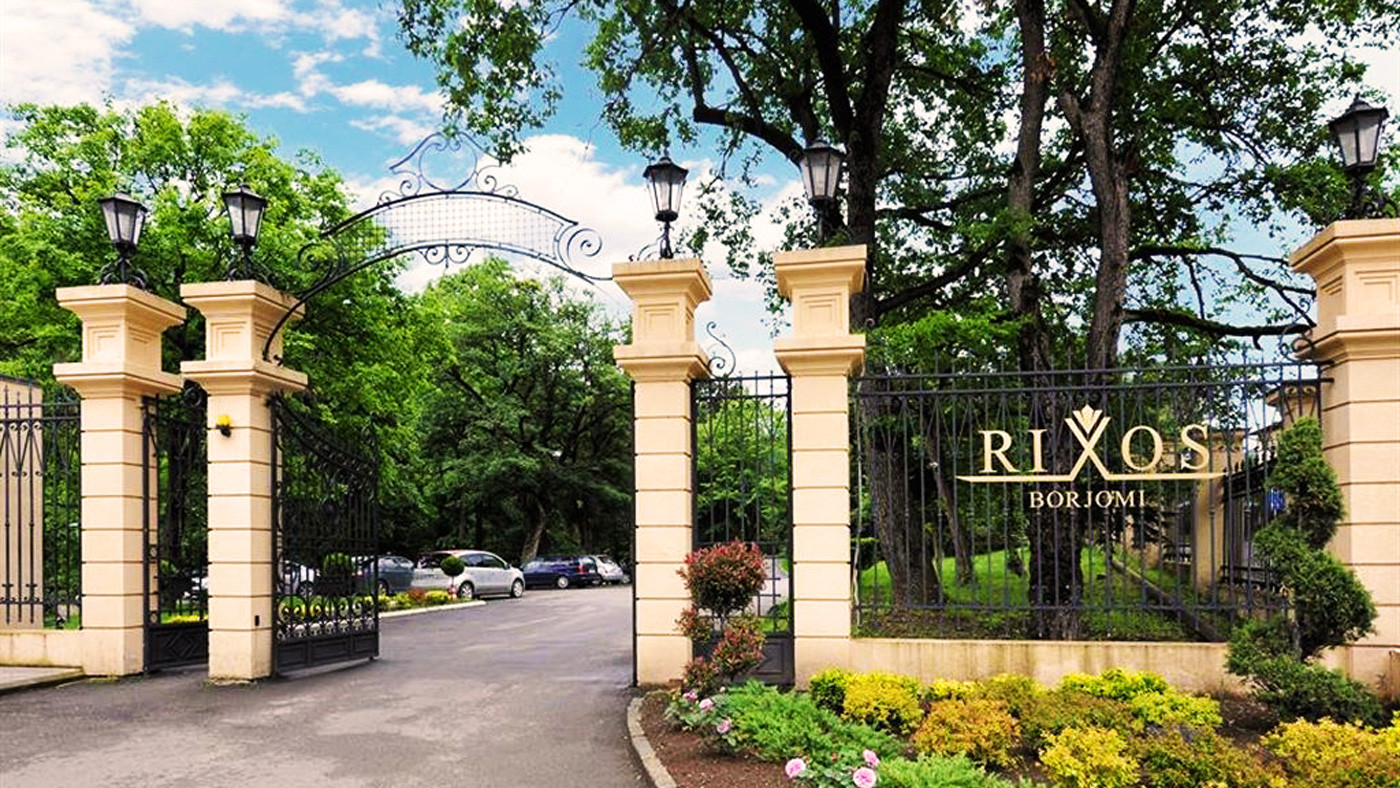 Entrance of Rixos hotel in Borjomi

Borjomi and Likani Spa resorts are located in the southern part of Georgia, the Samtskhe-Javakheti region, in Borjomi municipality. The most part of the resort is surrounded by picturesque mountains. The Borjomi-Kharagauli National Park, spread over the beautiful views of the South Caucasus, stretches for 700 square kilometers, making it one of the largest national parks in Europe.

The main wealth of Borjomi is the thermal-mineral waters of volcanic origin. Borjomi water is used to quench thirst, cool down, as well as for various medical purposes or special healing procedures. There are unique sulfur bathes in the Borjomi. Outdoor pools are located in a deep forest and they are relevant at any time of the year.

Bojomi and Likani areas are characterized with subtropical climate, with moderately mild, snowy winters and warm summers. The average temperature in January is -2.0 ° C, and in August +20 - +25 ° C.

Borjomi is a naturally carbonated mineral water from artesian springs in the Borjomi Gorge and in the Mtkvari river valley. These unique mineral waters are used for a balneological treatment. The resort was developed here since 19th c.  Spa hotels are constructed around the springs near Borjomi Park.

Borjomi water rises to the Earth's surface from a depth of 8-10 km through the pressure of natural gas, carbon dioxide. Unlike many other mineral waters, it does not manage underground cooling and rises to the surface in a warm form (38-41 ° С). It is enriched by the composition of 60 different minerals from the Caucasus Mountains. The results of the study show that deep mineralized, modern fresh and low mineralized waters are involved in the formation of Borjomi water. It is a source water rich in hydrocarbons and calcium.

Thanks to the minerals of volcanic origin, "Borjomi" best cleanses the body and relieves the unpleasant feeling of heaviness. Thanks to its unique natural properties, "Borjomi" not only quenches thirst, but also strengthens the immune system and raises the overall tone of the body.

Resort Likani is located on the western part of the town Borjomi. Mineral water "Likani" is a unique water saturated with living minerals and gas, which contains a moderate mineral-ionic complex. Its special feature is the unique ratio of hydrocarbons, magnesium and calcium and has a light taste. The abundance of natural carbon dioxide gas gives the water rising from a depth of 1500 meters a pleasant smoothness.

A beautiful forest park is planted on the edge of the river Mtkvari, where centuries-old oaks grow. One of the landmarks of Likani, the Romanov's Palace, built by the great Russian Emperor Nicholas Mikhail Romanov and architect Leonti Benua in 1892-95, is located at the center of the park. A decorative square is arranged around the palace. Visit the ruins of the 7th-9th century Church of St. Mary, which once had an active monastic life.

Borjomi and Likani resorts are truly wonderful places with comfortable and refreshing environment.

For booking or more info please, contact us here.