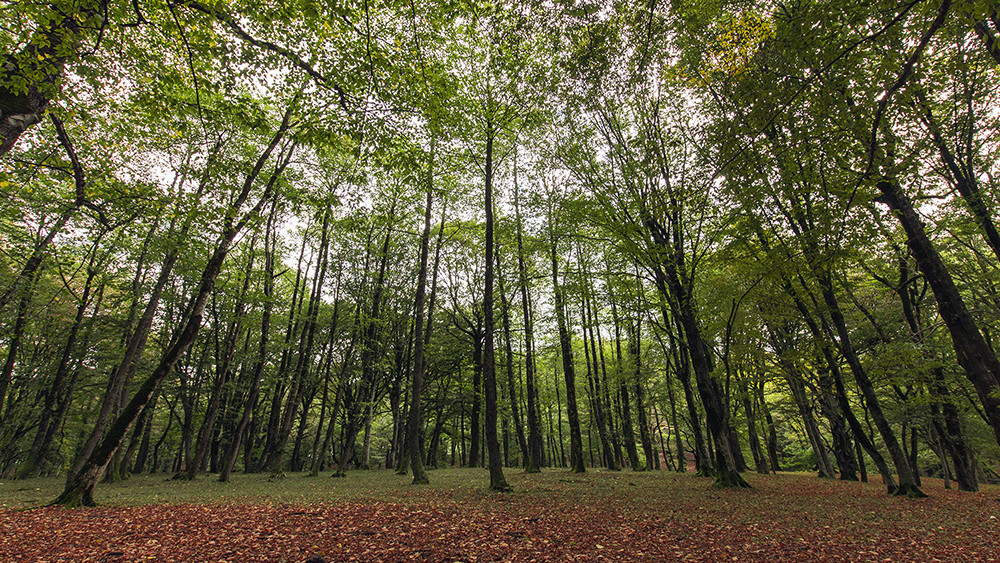 Ajameti Managed Nature Reserve is located in Baghdati district at 265 km distance from Tbilisi and at 15 km distance from Kutaisi, on the Rioni plain and consists of three districts: Ajameti, Vartsikhe and Sviri.

Ajameti Strict Nature Reserve is formed in 1946 and the aim of its establishing was to preserve the rare relicts – Imeretian oak (Quercus imeretina) and Zelkova tree (Zelkova carpinifolia). Forests cover 4738 ha of the Managed Nature Reserve.

The originality of Ajameti forest is that in the Kolkheti lowland it is almost the only place, where the sub-tropic mixed forests have been preserved in their primary conditions. The Ajameti forest is remarkable for old Imeretian oak and Zelkova groves preserved in their primary conditions. Some of the trees are more than 250 years old, and the century-old oaks are very frequent. Oak forest covers 4723 ha, hornbeam (Carpinus) – 93 ha, oriental hornbeam (Carpinus orientalis) – 23 ha. Dendron-flora is presented by 60 species. Here the oriental hornbeam and maple (Acer) are found. The sub-forest is thin and presented by Pontic rhododendron (Rhododendron ponticum), common medlar (Mespilus germanica), Dog rose (Rosa canina) and hawthorn (Crataegus).

Ajameti is poor in animal and bird species. Among mammals one can meet a hare, Red fox, jackal, squirrel, weasel, dormouse and badger here. The largest animal of Ajameti is a roe-deer. The following animals of the Red List of Georgia can be found in the Managed Nature Reserve: Leisler's bat (Nyctalus leisleri), Caucasian squirrel (Sciurus anomalus), common dormouse (Muscardinus avellanarius), Forest dormouse (Dryomys nitedula) and Caucasian otter (Lutra lutrameridionalis).

More than 60 species of birds are registered in the Ajameti Managed Nature Reserve. Out of them only twenty-one nest in the oak forest, the others appear in Ajameti while migrating or spending winter there.

Besides the unique forests, the environment of Ajameti is also famous for its historical monuments. At a distance of one and a half km from the Managed Nature Reserve there is a Vartsikhe borough that is built on the ruins of the town of Rodopolis. According to Procopius of Caesarea – the Byzantine historian of the 6th century, Rodopolis was a very beautiful town. In Geguti, at a distance of 4 km from the former town there are the ruins of the winter hunting palace of Georgian kings. Kutaisi is also an ancient city. And the Gelati monastery complex (12th century) and the Bagrati temple (11th century) are included in the List of the World Heritage Districts of the UNESCO.

Ajameti and its adjacent territories have quite good tourist potential. Besides the cultural and archeological tours, the driving-adventurous tours to Sairme and Zekari Pass can be also carried out with success. It is also possible to carry out the horse-riding, photo, video and ecological tours, as well as the bird-watching tours.